Trademark protection, takedown notices and petitions to invalidate trademark registrations may seem to be the stuff of big business, but a seemingly unlikely group of people is duking it out over an even unlikelier term: urban homesteading.

The term refers to a lifestyle of self-sufficiency and sustainability. Homesteaders have been at the forefront of sustainable use and self-sufficiency trends such as backyard chickens and goats, alternative energy and recycling.

So imagine the surprise that many in the rapidly growing urban homestead community across the country felt when they started receiving legal notices from one of their own.

The Pasadena, Calif.-based Dervaes Institute registered the term urban homestead as a service mark with the U.S. Patent and Trademark Office in October 2010. The nonprofit Dervaes Institute is owned and run by members of the Dervaes family, who live and farm on a one-fifth acre of land in Pasadena, where they grow—according to their website and other sources—75 percent of the food they consume. The Dervaeses also registered the term urban homesteading as a service mark in 2009. In recent years they have registered other terms, including Little Homestead in the City, Reject Resist Revolt and Homegrown Revolution. 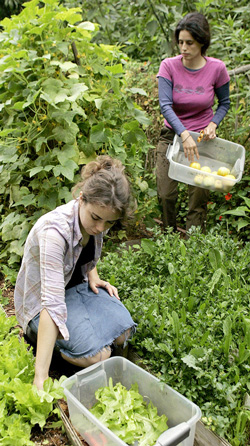 After registering the urban homestead marks, the Dervaes Institute began sending takedown notices earlier this year to a variety of writers, bloggers and others using the terms. Even Facebook was a recipient.

So what is any urban homesteader on the receiving end of such a distinctively noncommunal legal directive to do? Bring in the lawyers, of course.

Corynne McSherry, intellectual property director for the Electronic Frontier Foundation, a technology-focused civil liberties group in San Francisco, has taken up the cause for three parties who received takedown notices from the Dervaes Institute: Urban homesteaders Erik Knutzen and Kelly Coyne, who co-wrote the book The Urban Homestead, and the couple’s publisher, Process Media.

They did not take down anything.

In late February, McSherry sent her own cease-and-desist letter to the Dervaeses, demanding that they stop telling her clients to stop using the homesteading terms. Winston & Strawn also joined in the trademark scuffle; the law firm filed a petition along with the EFF asking the Patent and Trademark Office to cancel the registrations on the grounds that the words are descriptive and generic. The Dervaeses did not respond to requests for an interview.

University of Minnesota Law School associate professor William McGeveran says the Dervaes Institute likely overshot whatever trademark rights it ever had. Trademark rights are intended to prevent consumer confusion, he says. A phrase like urban homesteading could be protected to the extent that it is identified with the Dervaeses; insofar as it is a generic term, or has been in use by others, the Dervaeses couldn’t stop others from using these phrases.

“A lot of people think trademark registration is this automatic monopoly. And that’s not accurate,” says McGeveran. “Someone who was already using urban homesteading could keep using it. You could still use the phrase descriptively. If the defendant is using the phrase in a way that would confuse consumers as to sponsorship of the goods, you can’t use it that way. It seems like this is a phrase that has been used by a lot of people in a lot of contexts.”

Discovery for the petition to cancel is open until December, McSherry says. And for now, the terms are being used by her clients, by others in the urban homesteading community, and on Facebook.