'Free-range' parents encourage kids to broaden their horizons--the law, not so much 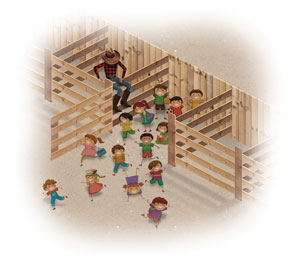 Those of us who’ve raised offspring know how we cherish them, nurture them, teach them and ultimately guide them—toward the door.

Does that seem a tad harsh? It shouldn’t. That’s the way nature intended it (and besides, they’re always welcome for a visit—unless it’s for a loan). In fact, many parents believe “failure to launch” is not an option, so they try to prepare their youngsters by granting them greater freedom to travel unaccompanied to schools and parks and such, building their sense of independence. The kids’ range gradually increases—thus, the basis of the term free-range parenting.

But how free should kids be? If you ask 10 sets of parents, you might get 10 different answers. Some, like Danielle and Alexander Meitiv of Silver Spring, Maryland, allow their son and daughter considerable latitude in terms of playing unattended at a park a mile from home or walking around the neighborhood on their own or with friends.

However, someone who didn’t share their philosophy on child-rearing called 911 last December after seeing Rafi, 10, and Dvora, 6, walking without an adult. And it happened again in April. Both times, police charged the parents with neglect and the news reports ran wild. Montgomery County Child Protective Services took the kids into custody, then visited their school to interview them—without the parents’ permission.

Because local laws typically offer few, if any, specifics on circumstances under which a child can be left without supervision, police and prosecutors have considerable leeway in deciding whether to charge parents with neglect or child endangerment.

In May, the county agency cleared the Meitivs of neglect in the December incident. The couple’s attorney, Matthew J. Dowd, told the Washington Post they intend to bring a civil action against the county “to ensure that this response from CPS and the police doesn’t occur again.”

The Meitivs aren’t alone. A Westbrook, Maine, single mom was charged with child endangerment in June for allowing her 7-year-old daughter to play at a park that is within eyesight of their home. Nicole Jensen got a call from police saying they had taken the girl to the station after receiving a call about a child left at the park.

“She was terrified,” Jensen told WMTW.com. “She did nothing wrong. She’s followed all of my rules.” Jensen said she intends to fight the charge in court.

Another single mom, Laura Browder of Houston, had a somewhat similar experience in July. She had a job interview at Memorial City Mall and had to bring her 6-year-old daughter and 2-year-old son along. She sat them at the food court and bought them lunch so they would be occupied during her appointment.

Browder told KHOU.com she was about 30 yards from the kids and could see them while she interviewed. But when she went to retrieve them, a police officer was there. Browder was arrested and charged with child abandonment.

These parents’ decisions to allow their kids to expand their range a bit cost them plenty in time, money and reputation. And yes, the world is a much different place than it was even just a generation ago. But at a time when government resources are stretched thin, some believe parents should be left to do the parenting.

This article originally appeared in the December 2015 issue of the ABA Journal with this headline: “Roam If You Want To: ‘Free-range’ parents encourage kids to broaden their horizons—the law, not so much.”