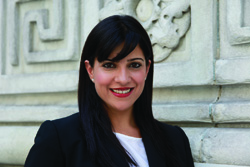 Reshma Saujani has a law degree from Yale and a master’s from Harvard. She ran (unsuccessfully) for Congress, is about to publish a book and is exploring a run for the office of New York City’s public advocate. Yet the 36-year-old former Davis Polk & Wardwell lawyer still has a regret: She doesn’t know how to code. And Saujani says she’s not alone. While women now compose more than half of the workforce, their numbers are underrepresented in technology and computer field positions, she says.

The former deputy public advocate for New York City is out to change that. She’s started Girls Who Code, a movement to even the playing field for women when it comes to the technology sector. “I thought that because I wanted to be a lawyer, I had to be a political science major. We need to shift that perception. Coding is going to be the way to communicate in the next few years.”

Girls Who Code launched this summer with 20 underprivileged girls selected to be part of the inaugural group. The girls learned about building websites, studied skills like robotics and went on field trips to high-tech companies, including Twitter and Google, according to Saujani.

While Saujani made ample use of her high-profile friends to support the program, including Twitter co-founder Jack Dorsey and fashion designer Diane Von Furstenberg, she says they also understood the importance of her mission. The majority of people who buy products or use social media are women. So she incorporated these facts into her sales pitch enlisting the support of technology companies and executives. “You cannot innovate unless the people who are buying the products are also making them,” she says.

Saujani is planning to expand the movement next year to several other cities, including Boston, Chicago and San Francisco. “We have to change what it looks like for women to be a coder, a technology entrepreneur,” she says. When girls are asked what they want to be when they grow up, “we want girls to raise their hands and say, ‘I want to be a coder.’ ”