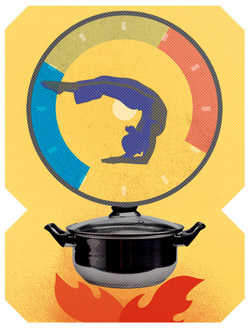 As a matter of general acceptance, yoga apparently still has a ways to go if the managing partner of a major law firm—in California, no less—can get ribbed by colleagues for his twice-a-week sessions.

Joseph P. McMonigle of San Francisco’s Long & Levit is used to that kind of response from fellow lawyers. “I guess the thinking is you just spend an hour ‘oming,’ ” says McMonigle, a past chair of the ABA Standing Committee on Lawyers’ Professional Liability. “They miss the fact that it’s a very rigorous exercise along with a meditation component. I only chuckle and wish they’d go with us to see how they’d do.”

But McMonigle, who defends lawyers in professional liability cases, fee disputes and bar regulatory matters, hasn’t practiced yoga for the past decade simply for the exercise. He believes it makes him a better lawyer. “I’m much more productive, and I can say with certainty that I function at a much higher level as a result of it,” he says.

McMonigle may still be one of a small cadre of devotees, but he isn’t alone in his belief that participating in activities like yoga, meditation or 12-step programs helps lawyers practice more effectively and make fewer of the mistakes that can lead to ethics tangles and malpractice claims. The professional liability committee even has begun offering sunrise yoga sessions during its twice-a-year conferences. The first few classes drew only two participants. Now, 15-20 people take to the mats.

“Lawyers and insurance professionals who attend are hardworking people, and the conference is packed with substantive material,” says committee member Heather L. Rosing, a shareholder at Klinedinst in San Diego who chairs the firm’s statewide professional liability department. “We thought it would be a nice break and relaxation session for attendees on the final day of the conference. People really, really enjoy it.”

Now, some lawyers who participate in stress-reduction programs are beginning to wonder why legal malpractice insurers have so far only given a passing nod to—but no discount for—the professional upside of such activities.

“I think we’re moving toward something like that,” McMonigle says. “My insurer asks questions about whether we have some kind of program. But it’s probably too new for underwriters to get their hands around. They’d probably call it ‘too California.’ ” Even in California.

MELLOW IS GOOD FOR YOU

It’s easy to make a case for stress relief as a benefit to lawyers. “If you’re tired or stressed, you’re more likely to make errors,” says Nancy J. Marshall, a partner at Deutsch, Kerrigan & Stiles in New Orleans, who’s never missed one of her twice-daily transcendental meditation sessions in 40 years. “To me, it’s obvious that if you’re rested, you’re better at your job and your life.”

Meditation produces a deep rest that releases pressure, says Marshall, a past member of the professional liability committee whose practice includes defending lawyers against malpractice claims.

“Not only does it get rid of the day’s debris, but it gets rid of deep-rooted stresses and strains, helps your clarity of mind, and helps your overall view of the world,” Marshall says. “Yet even with meditating, everyone makes mistakes. I definitely feel it’s helped me have the flexibility and clarity of mind to fix things before they’ve gone out and work through problems.”

Only recently have researchers begun to tangibly measure the effects of such activities on stress. A 2004 study, for instance, found that family caregivers of dementia patients achieved statistically significant reductions in depression and anxiety through yoga and meditation. And in a University of Texas study reported earlier this year, breast cancer patients who practiced yoga had significant declines in their stress hormone levels.

Briggs F. Cheney’s stress relief comes in the form of 12-step meetings. “I’m a recovering drunk and have been for a long time,” says Cheney, a past member of the professional liability committee who is of counsel at Sheehan & Sheehan in Albuquerque, N.M. “If I were king for a day, I’d make every lawyer in the country attend one or two 12-step meetings a week. They provide the tools for lawyers to deal with the pressures and stresses of practicing law. I believe you’re a better-equipped lawyer for participating.”

Cheney may be on to something. A 2002 study of 55 impaired lawyers by the Oregon Attorney Assistance Program found that, in the five years after their recovery and participation in 12-step programs, their incidence of malpractice claims and disciplinary complaints dropped roughly 75 percent.

“We think there’s a strong inference from that study—although it involved people who were in extreme dysfunction—that everybody who has a more balanced approach to their work is going to do better as well,” says Ira Zarov, chief executive officer of the Oregon State Bar Professional Liability Fund in Portland.

Oregon is the only state that requires lawyers to have malpractice insurance, and they must purchase the first $300,000 of coverage through the state bar fund. There’s no discount for participation in wellness programs. “Everybody pays the same amount,” Zarov says. “But we have a list of programs that speak to the benefit of wellness.”

Private insurance companies appear to be taking a similar approach. “We’re not giving credit for things such as yoga or 12-step programs,” says Gawain Charlton-Perrin, a risk-control consulting director at CNA Global Specialty Lines in Chicago. “Underwriters are trying to focus on objective criteria.”(Four other insurers declined comment or didn’t respond to requests for comment.)

The issue isn’t a policy priority for the lawyers’ professional liability committee, either. “That’s not some thing the committee is currently concentrating on,” Rosing says. “While it has potential for a future project, it’s not a current project.”

CNA focuses on training to prevent impairment, into which wellness programs are enveloped. “Often lawyers are so focused on work that they deal with stress in unhealthy ways, such as alcohol and drug addiction and, increasingly, gambling-type impairment issues,” says Charlton-Perrin.

Rather than address those issues in underwriting, however, “we explain balance-of-life issues as ways to help lawyers manage stress and minimize risk,” he says.

That, according to Charlton-Perrin, may be much more valuable to attorneys than premium discounts. “Attorneys suffering from impairment need to take care of themselves first to even practice law,” he says. “It’s one thing to be insurable. It’s another to be able to practice your profession.”