Going beyond the evidence to spin a story for your jury 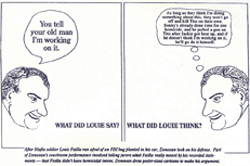 Trial storytelling is often highly creative and innovative. It is filled with aesthetic danger and strategic risk-taking—as are all forms of narrative art. But there is far more at stake for legal storytellers.

For them, endings and outcomes have consequences far beyond the telling of the story itself. And legal storytellers are further constrained in their creativity by ethical and evidentiary rules, by the need to tell meticulously accurate and “truthful” stories. It is also presumed that trial lawyers are limited by evidence presented in the courtroom, especially when they speak directly to the judge and jury while making their closing arguments. But is this always so? Skilled trial lawyers find ways to, in psychologist and lawyering theorist Jerome Bruner’s masterful phrasing, assist jurors to “go beyond the information given” in the courtroom—that is, effective lawyers suggest narrative frames that enable jurors to translate evidence into story.

To do so, technical rules and constraints are often tempered by what legal scholar Karl Llewellyn called, in the context of judicial decision-making, “situation sense.” To achieve their aims, trial advocates, like judges, must have a sense of what is apt; they must employ a practical wisdom that can’t be reduced to mere rule following. Technical rules are supplemented by unstated understandings of what is tolerated in a particular local professional culture—including knowing who the judge is and what is permissible based on relationships with attorneys on the other side—and strategically assessing the necessities of pursuing high-risk storytelling strategies that a particular case may demand.

Let me provide an illustration from my book Storytelling for Lawyers and identify several techniques that Connecticut criminal defense attorney Jeremiah Donovan used in his closing argument in a complex criminal case to go beyond the evidence presented at trial.

Here is a simplified version of the complex backstory: Louie Failla—one of eight co-defendants, reputed members of the Connecticut faction of the Patriarca crime family—was charged with multiple counts of racketeering in federal court in a 13-week trial. The most serious charge against Failla, a low-level soldier and driver for the leadership of the family, was for conspiracy to murder Tito Morales, his daughter’s former boyfriend and the father of Failla’s grandson.

Two mob informants had testified against Failla. But the most damaging testimony against Failla came from his own mouth. His Cadillac had been bugged by the FBI, and Failla was a man condemned by his own words. In surveillance tapes played at trial, Failla’s gravelly voice is heard plotting Morales’ execution under orders of the cruel mob boss Billy “the Wild Guy” Grasso, along with the two mob henchmen who also testified against Failla. In the tapes Failla brags about his role in various mob activities and implicates the other co-defendants in numerous crimes, while making his own guilt seemingly irrefutable. Failla did not take the stand to testify, although Donovan introduced excerpts from surveillance tapes showing a loving relationship between Failla and Morales and Failla’s grandson.

In the prosecution’s closing argument, a serious and deadpan harangue, Failla is depicted as a “flat” (undeveloped and one-dimensional) character—a low-ranking soldier in a unified mob family of like-minded gangsters. In the prosecutor’s story, Failla means exactly what he says and unequivocally reveals his intent to murder Morales.

In his closing argument, Donovan transforms the prosecutor’s simple, moralistic melodrama—with its cast of villainous, conspiratorial mobsters (the bad guys) apprehended by virtuous law enforcement officers (the good guys)—into a different type of story: a complex, character-based tragicomedy. Failla’s flat character comes alive as a conflicted protagonist. Donovan depicts Failla as a “verbal chameleon,” a narrative trickster, torn between the demands of his adopted mob family on one side and his love of his real family, including Morales, on the other.

Donovan’s retelling meticulously revisits and unpacks the meaning or “subtext” of the most damning portions of the surveillance tapes, resplicing the transcripts and converting the evidence into a dramatic sequence of cinematic scenes. In Donovan’s counterstory, Failla merely pretends to go along with the murder conspiracy in order to stall the other mobsters, but he does nothing to carry out the execution. Indeed, his inaction provides Morales sufficient time to extricate himself from the situation.

How does Donovan structure this counternarrative, especially since there is little supporting evidence presented at trial? First, Donovan interweaves a sequence of related mini-stories that reconfigure his argument into a three-act dramatic narrative structure, with each story marking a transition point in the plot. Donovan begins by telling an Irish pub story that establishes a comedic tone for the closing argument:

“You all know, who—well, in a bar in Dublin, in walked a fellow. … He had that glimmer in his eyes of craziness. … He walked into the bar and said, ‘All right, where’s O’Toole?’

“All the patrons from the bar kind of looked into their drinks. They didn’t want to be mistaken for O’Toole, except one little guy, 70 years old, 5-foot-2, in the back. ‘I’m O’Toole. What’s it to you?’

“Well, the big guy picked up O’Toole, ran him down the length of the bar, knocking off glasses all the way, and threw him through the plate-glass window, walked outside, picked him up, threw him through another plate-glass window and left him for dead. All the patrons looked up at the poor old boy in the bloody mess on the floor. Guy looked up and said, ‘I sure pulled a fast one on that big fellow. I’m not O’Toole at all.’

“Now I feel like O’Toole, because in tape after tape after tape Louie Failla says, ‘I am O’Toole. I’m the guy you’re looking for. I’m the new capo for Connecticut.’ … And I’m getting up and saying he’s not O’Toole at all. He’s not. He’s not guilty of the RICO offenses with which he’s charged.”

Donovan’s basic premise is that Failla, akin to the O’Toole character in the story, is a fabulist, an exaggerator, a character akin to characters in an imagined mob story, whose literal words do not reveal intentions or motivations. In Hollywood parlance, Donovan’s first act marked by the pub story provides the “setup” for the complex narrative that follows.

Theatrically assuming his version of Failla’s gravelly voice as if presenting a radio play, Donovan recites the most incriminating portions from the transcripts of the surveillance tapes, supplementing Failla’s spoken words with Failla’s unspoken interior monologue. Donovan thus presents a virtual testimony on Failla’s behalf, despite the fact that Failla himself has never taken the stand to testify and there is no testimony or evidence in the trial record to substantiate Donovan’s claims about what Failla was actually thinking.

Of course, Donovan’s reading of the transcript does not go unchallenged. The prosecutor’s rebuttal closing argument concludes:

“With respect to Mr. Failla and Tito Morales, … Mr. Donovan is an excellent lawyer. … But when Mr. Donovan stands here in front of you with cartoons and suggests to you what Louie Failla was thinking, I suggest to you that that’s going too far. Because there is no evidence in this case about what Mr. Failla was thinking or saying other than the tape recordings which were admitted into evidence in this case. … That’s not the evidence. … That’s lawyers’ games. Lawyers’ games.”

Nevertheless, despite the prosecutor’s admonitions, Donovan’s calculated use of cartoons and stories-within-stories enabled him to present Failla’s version of the story without Failla ever taking the stand and subjecting himself to impeachment and cross-examination. Shrewd and successful trial lawyers often take calculated risks to go beyond the evidence given into the imaginative dimension of creative artistry and narrative persuasion.

This article originally appeared in the February 2015 issue of the ABA Journal with this headline: “Going Beyond the Evidence: A skilled trial lawyer uses narrative persuasion to deliver a story to the jury in a complex criminal case.”