Photo of the Yale Law Library courtesy of Yale University.

After a successful trial run, Yale’s Goldman Law Library will be adding a permanent addition to its collection: A Jack Russell-border terrier mix.

Better known as Monty, the 11-year-old pooch will be available for students as a stress reliever starting this fall. “He’s an international therapy dog,” jokes Julian Aiken, Monty’s owner, who also is a member of the Goldman Library staff. 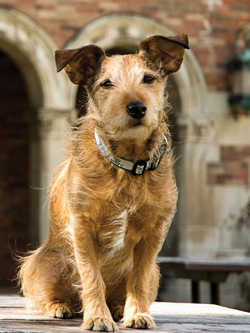 Photo of the Monty, the Jack Russell-border terrier mix, courtesy of Yale University.

Aiken had Monty certified as a therapy dog in England after the pair moved from rural Oxfordshire, where the dog passed most of his younger years chasing rats. Aiken says the dog’s temperament and ability to follow commands made Monty perfectly suited to be a therapy dog and gave him something to do.

When Aiken moved across the pond last year to join Yale’s law library staff, he was delighted at the school’s efforts to make students feel “welcome, loved, and feel like human beings and law students.” He thought Monty might be a welcome addition to the atmosphere. Monty also became certified as a therapy dog in the United States.

A pilot program in March proved to be such a success with the students—the dog was voted prom king and invited to commencement ceremonies—that the library decided to make the arrangement permanent. Monty will be available for checkout (actually, scheduled appointments in Aiken’s office) during “periods of potentially increased stress.”

“It’s been extremely successful and positive for all involved,” Aiken says. “Monty’s probably been met with greater delight than any other innovation that we’ve introduced.”

What do you wish your law school library had (besides books)? Answer in the comments.