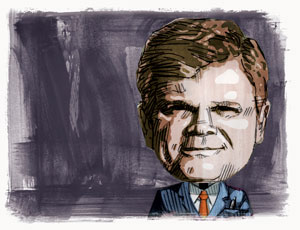 The most important part of a brief? That depends on whom you ask. Some say the issue statements. Others say page 1 (which ought to amount to the same thing). Still others say the statement of facts. A few say the conclusion. But one of my favorite answers is the table of contents: Done right, it shows all the substantive point headings arrayed on one or two pages. Certainly those headings are the most important part of the argument section in a brief.

Obvious, you say? Not really. Not even 5 percent of the hundreds of briefs I review every year—mostly from major firms—contain competent point headings. My standards? Those of the Office of the U.S. Solicitor General, almost all of whose tables of contents are virtuoso performances. You’d be wise to spend some time printing out SG tables of contents for study. (All post-1981 briefs are available for download at the SG’s website.)

Here are the basic guidelines you’ll generally see reflected in all those SG briefs:

• All headings for points and subpoints are in complete declarative sentences varying in length from 15 to 35 words.

• Headings are typed as normal sentences (never in all-caps and especially never in all-initial-caps), boldfaced and single-spaced, in the body of the brief. (You’ll find some exceptions at the SG website. Ignore them.)

• If a case is mentioned in a point heading, its name is used without citation. (Footnotes are never appended to point headings.)

• In the brief’s table of contents, the point headings set forth a clear outline of the argument. They appear there with a cascading left-side indent to show the hierarchy of points. Nothing is in boldface in the table of contents.

• The headings move from major to minor premises (progressing from the law to the facts), and then to points in refutation.

• Up to three major points may take Roman numerals (I, II, III); if there is only one overarching point, it remains unnumbered.

• Subpoints are marked by capital letters (A, B, C).

It’s possible to depict the SG’s practice—which in this instance is the best existing practice—through a rhetorical template. Good point headings predictably go something like this:

C. [Opponent’s position on this point is wrong because … .]

C. [Opponent’s other position on this point is wrong because … .]

A. Section 514 is narrowly tailored to ensure both actual and perceived compliance with international obligations.

B. Section 514 is narrowly tailored to further the government’s interest in securing greater protections for American authors abroad.

C. Section 514 is narrowly tailored to further the government’s interest in equitable treatment of foreign authors.

Occasionally you’ll find that naming your opponent is unavoidable. Even then, emphasize the facts, the law or your opponent’s position—not the person.

Have you noticed the prominence of triplets in the examples I’ve given? Arguments come in threes.

A mathematician once told me that there are really only four numbers in the world: one, two, three and many. There’s something to that: Four items just seem to be one too many for most people to hold in their memory. But a brief, memo, proposal, report or any other piece of legal writing feels underdeveloped when it’s supported by only one or two points.

So try writing down your three main points as full sentences: Spell out your logic as clearly as you can. That way, you’ll force yourself to think through your reasons and arguments—and you’ll make a stronger case.

If you try to simply think things out as you write, you’ll run into trouble because you won’t really know yet what you’re hoping your reader will think or do. You’ll flail about, gradually clarifying your point as you make several runs at it. In the end, after multiple attempts, you may finally figure out what you have to say, but you probably won’t say it in a way that your reader can follow.

After you’ve written in complete sentences the three most important propositions you want to advance, rethink their order.

It’s astonishing how well it works simply to plant the idea in your mind that you’ll have three overarching points. Your subconscious mind and your conscious mind will set to work ascertaining the big three. You’ll know they must be full propositions.

Let’s say you’re a prosecutor in a case in which a witness was impeached with rebuttal testimony stating that both the witness and the defendant belonged to a prison organization whose members were sworn to commit perjury for one another. On appeal, the defendant claims prejudice. You devise these three propositions:

I. Proof of a witness’s bias is always relevant.

II. Bias may be shown by proving that a witness and a party belong to the same group.

III. Evidence that members of a group are sworn to commit perjury on each other’s behalf is even more probative of bias than evidence of mere common membership and is hence clearly relevant.

Or let’s say instead that it’s a civil case in which you’re arguing that an administrative agency may adopt an interpretive rule altering its earlier interpretation of an agency regulation without going through notice-and-comment rule-making. You devise these three propositions:

I. The APA categorically exempts interpretive rules from the APA’s notice-and-comment requirement.

II. Congress designed the APA’s exemption for interpretive rules to encourage, not obstruct, the public’s access to agency interpretations.

III. The APA specifies the maximum procedural requirements that courts may enforce for agency rule-making.

Once you’ve gotten this far, you’re well on your way.

With your three propositions in hand, you should feel some degree of confidence that you’ve made a good start toward building a compelling argument. Now it’s time to consider how many supporting points each proposition might need. Are there subpropositions? Try your hand at writing them out as point headings.

Now you have a superb beginning and you haven’t even written a paragraph yet! Note also that you’ve skipped the usual method of using mere phrases (or topics) in your outline. You’ve gone straight to the propositions. And being a propositional writer—one who figures out the main points before beginning to write—is your key to efficiency and quality.

Let me repeat that: Becoming a propositional writer—one who figures out the main points before beginning to write—is your key to efficiency and quality.

What’s the most pervasive flaw among legal writers? It’s the tendency to begin writing before fully understanding the message to be conveyed. Lawyers often don’t think through what they want to say until they’re already writing—and they end up meandering, backtracking and even restarting. Unless they spend a great deal of time rewriting and cutting, they end up submitting something verbose, rambling, repetitious, incohesive. And unpersuasive.

The mature writer first figures out the major propositions and then writes in support of them. The resulting product has both an overt structure and a strong focus. This method of writing isn’t inborn; it’s learned. With some patience and humility, anyone can learn to do it.

This article originally appeared in the September 2015 issue of the ABA Journal with this headline: “Pointed Advice on Point Headings: Good headings show you’ve thought out your arguments well in advance, and they help make your case.”