Goodwill is a precious resource for you and your clients, so follow the Golden Rule 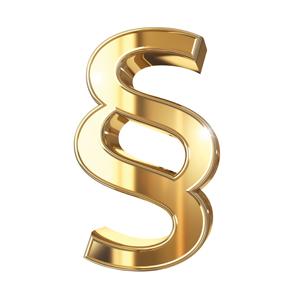 If I told you that you should obey the ethic of reciprocity, you’d look at me as if I had two heads. Most people know it as the Golden Rule: Do unto others as you would have them do unto you. I prefer the ethical formulation because it tells you what your behavior should accomplish, which is reciprocity.

I suppose it’s the underlying grandiosity of lawyers—the belief that what we do is sacred—that causes so much of what we do to be couched in terms of religion. The rules of procedure laid down by the courts are referred to as “the bible.” A high court “hands down” a ruling, like the Ten Commandments from the mount. Aiding your client by refusing to burn the bridges between you and your adversary is “the Golden Rule.”

Nevertheless, we lawyers are human, not divine, and if an adversary goes for your jugular, you will most likely want to respond in kind. (That is a different kind of biblical reciprocity—an eye for an eye.) It is, however, to your client’s benefit for you to turn the other cheek. The practice of backstabbing an opponent is one that will haunt you for your entire legal career, and it could torpedo your client’s case.

Here’s an example: When I was a fairly new partner at my firm, a senior partner undertook the defense of a client who had been sued by a movie studio for the return of some films. The partner called the opposing lawyer and asked for an extension of time to answer the complaint. He received a written extension by fax (this was about a hundred years ago) and proceeded to file a motion to dismiss within the extended time. His adversary moved to dismiss the motion to dismiss on the ground that the extension of time was only to answer the complaint, not respond to it. The partner went back to the fax and saw that his extension was definitely couched as an extension to answer. He was furious. He came to me waving the fax, asking me if I could believe how he had been hoodwinked. I think I just nodded my head.

Two things occurred to me about this situation. First, it’s always a good idea to read documents carefully. Second, if the opposing lawyer wanted to ensure my partner’s goodwill in what turned out to be a long, dragged-out case, he would have pointed out on the phone that the extension was only to answer the complaint. In fact, the stipulation for extension could have pointed it out in the verbiage: “Defendant is hereby granted a 20-day extension to answer, but not to otherwise plead to, the complaint.”

Why is goodwill important? Because it will inevitably come to pass that you will need your opponent to be courteous to you, and if you have trampled on his or her feelings or willingness to be cooperative, you can find yourself in a terrible predicament.

In the movie case, opposing counsel asked that trial be delayed for a month because his wife was having a baby. Needless to say, my partner refused to agree to the delay. Our opponent was forced to file a motion to request a delay, and the judge “split the baby” and delayed the trial for two weeks.

You may be making more fees by fighting it out with your opponent over every little thing, but constant squabbling among counsel is detrimental to the justice system, as well as to your client.

Most lawyers start out with a reserve of goodwill toward the opposition. Don’t squander it. You will need it—sooner or later.

This article originally appeared in the June 2015 issue of the ABA Journal with this headline: “The Golden Rule: Goodwill is a precious resource for you and your clients.”

Janet S. Kole is a retired trial lawyer from Philadelphia and the author of numerous books, including "Pleading Your Case: Complaints and Responses" and the murder mystery "Suggestion of Death."