Governors battle to shape the judiciary without merit selection 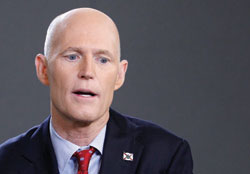 While election watchers look to legislative results in the bellwether 2014 races, many state judiciaries will be facing under-the-radar challenges that could meaningfully change the political landscape.

“We know already there’s going to be one or two ballot items dealing with merit selection—simply getting rid of it or giving the governor substantial power over the process. I anticipate Kansas, maybe Florida or Arizona,” says William Raftery, an analyst with the National Center for State Courts. “There’s this huge push to take control away from the [judicial] nominating commissions —getting away from them—and handing control to the governor, and to a lesser degree to the legislature.”

The Sunshine State is a shining example of this effort in practice. Since his election in 2011, Gov. Rick Scott has been steadily working to stack Florida’s judicial nominating commissions with like-minded conservatives. Under Florida law, the governor appoints the nine members of each JNC, with four of the nine chosen from a slate submitted by the Florida Bar. However, Scott has rejected more than 83 percent of the nominees selected by the bar. Out of 96 names of vetted candidates submitted since 2011, Gov. Scott has appointed only 16, with many open positions on commissions across the state left unfilled.

“We put out a call to members of our bar to fill out applications to be considered for a nomination, so [the rejections] required a second round, if you will, because the ones selected have been through a screening process already,” says Francine Walker, director of public information for the Florida Bar.

No other governor has ever rejected JNC nominees, and the Florida Bar’s volunteer board of governors has had to dig deep for extra names. In addition, the terms for 78 JNC members are set to expire in June, and all of them were appointed by Scott’s predecessor, Republican Charlie Crist.

Walker emphasizes that the Florida Bar “respects the law as it stands,” which allows the governor to reject submissions. “We’ve just done our best to have additional applications being submitted and considering those and sending up alternate lists,” Walker says.

Others aren’t as diplomatic. Sandy D’Alemberte, a former ABA president and president emeritus of Florida State University, calls it “a sorry, sorry instance of bad government and bad politics.”

D’Alemberte served in the Florida legislature from 1966 to 1972, and he helped draft the original article that formed the state’s judicial nominating commissions, under the direction of Republican Gov. Reubin Askew.

“Historically we’ve had a number of very good governors, both Republican and Democrat, in Florida who paid attention to the quality of the courts,” D’Alemberte says. “But the present regime wants to inject political hacks into a system that has been pretty distinguished for some decades.”

According to D’Alemberte, nominating commissions picked by Gov. Scott are putting forward names of candidates who have “no qualifications” to be judges. “Their only credential is that they are conservatives or participated in political campaigns,” D’Alemberte says.

Former Republican state senator and activist Alex Villalobos agrees, adding that Scott’s administration is setting a dangerous precedent. The Tallahassee attorney advocates for an independent judiciary, free from political influence and “dark money” attacks, through the bipartisan organization he helped form, Democracy at Stake. In 2001, he voted along party lines to change the structure of state’s judicial nominating commissions to take away three automatic appointments to them by the Florida Bar. It’s a decision he now regrets.

“Gov. Scott’s general counsel [Peter Antonacci] actually said the governor rejected certain names because he wanted people who were like-minded to the governor,” Villalobos says. “So basically they’re looking for like-minded conservatives. But what goes around comes around, and it’s a bad idea to try to influence outcomes. We’re on top now, but the day will come when we won’t be.”

Antonacci declined to comment for this article, but a representative of the governor’s office says that “the governor selects the best candidates.” When asked about statistics that show Gov. Scott is most likely to turn down attorneys who are registered Democrats or affiliated with left-leaning groups, or those who promote themselves as trial lawyers, Scott’s office responded: “The specific role of the JNCs is outlined in the Florida Constitution and statutes.”

But Scott isn’t the only state executive taking aim at merit selection. Across the nation, judicial nominating commissions and judicial elections are increasingly perceived as ripe areas for political opportunity. And because judges aren’t savvy fundraisers or campaigners, outside money and ads can potentially sway an election.

“These groups pumping money into these races have found out it’s a lot cheaper to buy a court than to buy a seat in the House or Senate—or a governorship,” Villalobos says.

The politicization of the judiciary has been a creeping phenomenon that’s gained traction in recent years. For the most part, merit selection and judicial nominating commissions fail to interest a disengaged voting public, making them an easy partisan target. (See “The Siege on State Courts,” ABA Journal, July 2013.) Many who want to eliminate judicial nominating commissions argue the state court system should emulate the federal model, with the executive office holding the authority to appoint judges.

In Tennessee, supporters describe it as the Founding Fathers Plus Plan—where judges aren’t elected for life tenures, but instead receive eight-year terms and then are up for retention. Legislators ended the state’s JNC system in June last year. Founding Fathers Plus was approved by two-thirds majorities in the legislature and is scheduled to appear on the November ballot to amend the state constitution.

According to statistics compiled by the NCSC, efforts to repeal or eliminate merit selection are almost universally products of right-leaning legislatures or Republican governors. In contrast, the few efforts to adopt merit selection where it doesn’t already exist tend to involve bi-partisan participation.

“On the one hand, no state has adopted merit selection in a while; but by the same token, state voters aren’t keen on disassembling existing systems,” Raftery notes.

That’s what happened in Arizona in 2012, when legislators attempted to give the governor the ability to pick from eight nominees, rather than three. The measure was rejected at the ballot box by a wide margin. The legislature then tried to enact the bill into law, and the Arizona Supreme Court struck it down as unconstitutional. Similar attempts by legislatures in Missouri and Florida also failed.

But in Kansas, legislators are making inroads. The state already removed merit selection from its court of appeals in 2013, replacing it with gubernatorial appointments.

And Gov. Sam Brownback has threatened to re-examine the merit system for selecting supreme court justices, a move that would require amending the state constitution. Kansas legislators are also attempting to lower the mandatory retirement age for judges from 75 to 65 and strip the supreme court of jurisdiction over criminal cases, which would be handled by a new court of appeals.

“We have legislators who are involved in court intimidation,” says Jim Robinson, a defense attorney who chairs the legislative committee of the Wichita Bar Association. “The unfortunate thing is obviously we haven’t done a good job at civic education because otherwise we wouldn’t be having this issue right now.”

The National Association of Women Judges is seeking to combat what the group describes as an “unprecedented threat” faced by state court systems. It has launched the Informed Voters Project, in time for the 2014 judicial elections, “to help voters understand why it’s important to elect qualified judges who will follow the law rather than submit to special interest or partisan pressures,” says Justice Joan Irion of California’s Fourth District Court of Appeal.

According to Villalobos, the former Florida state senator, studies by Democracy at Stake show that getting the word out through education campaigns is an important tactic during retention elections and other political battles.

“No one really knows who [the justices] are or what they did. Whoever first defines these justices is who’s going to win,” Villalobos says.

This article originally appeared in the February 2014 issue of the ABA Journal with this headline: “Bench Battle: Governors aim to pick their own judges.”