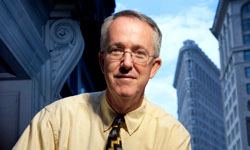 Fred Rooney: “The social justice model is good for elected officials and for startup solos.” Photo by Len Irish.

When Yogi Patel decided to start a solo practice last year, he turned to his alma mater for help. Since 2007 the City University of New York School of Law has offered an incubator for fledging solos. And the trend is spreading throughout the country with at least six schools now offering similar programs.

CUNY’s incubator, which requires admission, offers solos well-appointed Manhattan office space for $500 a month in exchange for a commitment to work a minimum of 12 hours per month representing an underserved population in civil matters for the bargain rate of $75 per hour. Solos can be a part of the incubator for up to 18 months.

“There are colleagues you can turn to, an open-door policy,” says Patel, who graduated in 2006 and worked for a construction company and a law firm before going solo. “That isolated feeling of being on your own is alleviated a bit.”

The Incubator for Justice is the brainchild of CUNY law professor Fred Rooney.

“We’re talking about the worst economic crisis in decades, so it’s a very hard time to start a law practice,” says Rooney, who now devotes significant time talking to other law schools about starting similar programs.

AN UPSWING IN SUPPORT

“There seems to be an emergence of interest in incubator, residence and post-grad support systems,” says Will Hornsby, staff counsel for the ABA’s Division for Legal Services. The ABA is starting a discussion list and document archive for idea-sharing about incubators, and it is planning to host forums for those administering incubator projects.

Law schools have run into some unexpected competition. In Kansas City, for example, the incubator found itself in competition with local law firms so desperate to fill their empty office space that they offered alumni cut-rate rents that the school could not compete against, says UMKC dean Ellen Suni.

In response, the incubator has lowered its rent and is shifting to a model that hosts both recent graduates aspiring to go solo and a community-focused law office that will do pro bono work and include existing students, she says. The solos may benefit from referrals.

Rooney favors the social justice incubator model. CUNY’s model has an unofficial partnership with local government officials who have helped fund the school’s incubator through allocations to the law school.

“It’s good for the elected officials because they’re providing a very needed service in their district,” Rooney says. And, he adds, it’s also great for the lawyer because it offers a startup solo practice with guaranteed, paying clients.