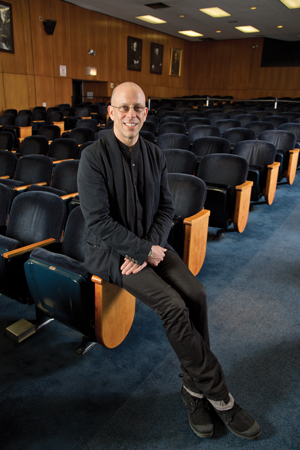 When Jonathan Askin's students at Brooklyn Law School suggested organizing a "hackathon," he thought it was a risky proposition. Would other legal professionals think he was promoting illicit or even criminal activity in a law school setting?

"If this had backfired, my head would have been on the chopping block," he says. "We flirted with the idea for years and, frankly, I chickened out every time."

That is, until April 2012, when Askin—with the support of the Brooklyn Law Incubator & Policy Clinic—helped organize a legal hackathon.

The hackathon is a workshop, meet-up or conference bringing experts from different disciplines together with technologists looking for innovative ways to tackle long-standing problems. It is also proving to be a way for like-minded lawyers to find each other and help some find new directions in their careers. The ABA Journal has sponsored two legal hackathons in the past year.

The idea is to create an app, service, policy proposal or other work product that can address a real-world problem. Askin says the hackathon has also helped his students find careers in the face of an otherwise contracting legal job market. "It was a terrible time to find work if you cared about securities work on Wall Street," says Askin. "But I find students that have great stories get great jobs. We were meeting entrepreneurs and programmers who had special talents and needs that you don't often meet, and those connections sparked a lot of new careers."

Out of the initial legal hackathon in Brooklyn, the name Legal Hackers became an identity, and a number of Legal Hackers chapters have sprung up across the country.

One of Askin's former students, Jameson Dempsey, an associate in Kelley Drye & Warren's Washington, D.C., office, helped form a branch there. After leaving New York for Washington, he found that he missed the connections made through the legal hackathon.

"I knew this environment was ripe for this kind of meeting," Dempsey says. "Where else in the world do you have this many lawyers in one city working on the biggest issues in technology and law?"

The first challenge for hackathon organizers working to get lawyers on board was to overcome the stigma around the word hacker.

"To most lawyers, 'hackathon' probably sounds like an invitation to commit felonies and sets them fleeing," says Dazza Greenwood, a lawyer and research scientist at the MIT Media Lab. "But to people who get it, a legal hackathon is about lawyers, engineers and policymakers interested in solving problems at the intersection of the law and technology."

The hackathon is a rare opportunity for lawyers to consider legal issues outside of the normal parameters of the law office. For example, last June the D.C. chapter held a BYOD (bring your own drone) event, where drone hobbyists and law and policy experts met at an outdoor barbecue to discuss regulatory issues for drone pilots.

And producing something out of the session is required. Or as Greenwood puts it: "It's a hackathon, not a talkathon." A problem or challenge is posed, and then groups pull together a demonstration.

"The end of the hackathon is almost always the end of the project," he says. "But after a good hackathon, one or two [concepts] might keep going for a while afterward."

These projects can often become live services. For example, the D.C. chapter now gives Le Hackie Awards to services like SCOTUS Servo, a Twitter account that notifies followers whenever a change or edit is made to a published U.S. Supreme Court opinion. Another group began FirsttoDisclose.org after the Code Across Boston event. Greenwood, who has been helping manage that project, says the database could make it easy to disclose and find prior art for patent applications.

Ideally, these projects become networking opportunities, resumé builders and job opportunities for enterprising lawyers. Askin says many of his students have found jobs working for companies that never had a lawyer on staff before, or those that challenge existing regulatory and legal regimes.

Today there are about 20 Legal Hackers chapters that form a loosely affiliated movement in places such as Korea, London and Sweden.

"Most lawyers I know would not be attracted to this or consider this a sound use of time," Greenwood says. "But the Internet is changing the way the world works, and if lawyers and developers have a common understanding, maybe we can help change things for the better."

This article originally appeared in the June 2015 issue of the ABA Journal with this headline: “Hacking the Law: 'Hackathon' movement may jump-start a legal career.”