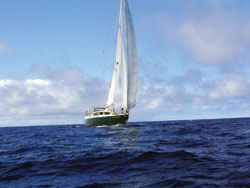 After closing their first investment deal, the staff of the newly formed Satori Capital went out to dinner in Dallas to celebrate. Rugger Burke, the general counsel and principal, joined them, but not for long; he had a plane to catch. Soon, he’d be sailing 2,450 nautical miles across the North Pacific in a sailboat smaller than a city apartment. And he wasn’t completely sure he’d make it back.

Burke has always courted adventure. He’s climbed mountains, gone skydiving, ridden west across South America on a motorcycle. Although the idea of being lost in the middle of the ocean terrified him, he started taking sailing lessons in 2009 on a small Dallas lake just in case he might one day attempt a voyage.

In May 2010, he did just that—but not before writing out a will and seeing everyone he could before he left. Shades of the film All Is Lost.

The adventure he calls “wonderful, frightening and life-changing” began with a Google search. Burke looked for a crew to join with simple search terms like “trans-Pacific crossing” and “boats for rent.” This led to message boards, where he started following leads on domestically flagged boats with English-speaking crews until he finally found a fit with John Van Strien, captain of the Western Grace.

It was hard work from the start: cleaning and mending ropes, checking sails and doing the maintenance work required when moving a boat from warm to cold water. And all the while, Burke, the Van Striens and another sailor named Keith had to keep the boat moving. “It took at least two people to operate the boat. It was 24/7, and half the time it was in the dark,” Burke says, adding that the dark was often more akin to pitch-black. There’s no mysterious source of ambient light on a boat like in the movies.

Days passed. “It was like a mini slice of life, with times of great excitement and times of great boredom,” Burke says. With nothing to obstruct the view in any direction, he saw spectacular sunsets. Freighters. Dolphins and sea otters. At one point, a whale surfaced in the boat’s wake.

On Mother’s Day morning, however, the calm shattered. Hurricane-force winds battered the boat, and powerful waves pummeled the bow. It was, Burke explains, “like living in the middle of a car crash.” The rudder failed. The gauges weren’t working, so they had to direct the boat by feel. They fixed the rudder. It failed again. (There are those shades again.)

By evening, the waves reached two stories high, tossing the boat higher than 30 feet. The weight of the ballast would right the craft just in time for another series of waves. Nerves frayed, the crew worked in shifts to stave off fatigue. At 10 p.m., Burke found himself alone, harnessed to the deck and responsible, for the next two hours, for holding the bow upwind to prevent the rigging from tearing and the mast from ripping away. He couldn’t fail. Four lives depended on it. By sunrise, the storm had passed and the nearly 24-hour ordeal was over.

Looking back, Burke says he faced down his greatest fear during that storm. But the part he’s perhaps most proud of took place days later as the boat entered the harbor in British Columbia and he had to navigate across shipping lanes, through straits and around giant rocks. “There was a lot of technical sailing, and I spent a good part of two days sailing solo through it,” he says.

Burke hasn’t taken any significant sailing trips since returning home, and he recently sold his own small sailboat. But he says he has less fear in his life now.

“It’s not about no longer being cautious; it’s just building a relationship with the things that make you uncomfortable,” he says. “I found that the fear I had, the fear of the unknown, was mostly in my mind.” 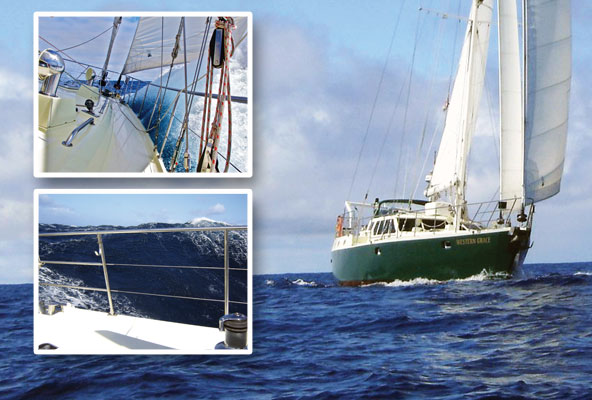 • Time out of the office: Four weeks

• Time-off tip: Ask for help. Before leaving, Burke made sure everything was organized, but he also reached out to everyone he worked with for their help in his absence. “People can be very supportive if you describe what it is that you want to do and the meaning behind it,” he says.

• Important to bring: A good set of binoculars. “One of the big hazards you have to be able to watch out for is containers that have fallen off boats,” Burke says.

• Easy to leave: A satellite phone. “I found that when you are on a moving object, you can’t fix on a point in the sky long enough to get a signal,” he says. It’s also not a reliable way to place a distress call. “Even if you are on a deck that’s still enough to aim it at a satellite, you still have to hope that there is some sort of coast guard or rescue service that can come and get you.”

• Traveling tip: When it comes to technology, go low-tech and indestructible. Burke goes low-tech with video cameras. “I bring a $50 flip camera, and I usually take two because inevitably one goes down due to dust or gunk,” he says. His indestructible item is his Leica M Digital Rangefinder camera: “The only thing I really want to bring back is pictures.”