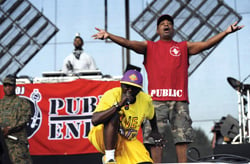 Back in 1989, when Chuck D and Flavor Flav exhorted Public Enemy fans to “Fight the Power,” it’s likely that they never envisioned their anti-establishment anthem would be deconstructed and analyzed as part of an innovative law school curriculum. But the lyrics and discographies of Public Enemy and other hip-hop artists are indeed the subjects of a recent law school seminar and a forthcoming anthology studying the intersection of the Constitution and hip-hop.

Law professors Donald Tibbs and André Cummings are working on a textbook based on the class they co-taught this spring called “Hip-Hop and the American Constitution.” The lecture series brought an eclectic mix of law professors, formerly incarcerated people and rap artists to the classroom to discuss hip-hop’s legal implications. “It initially was a hope and dream” to teach the class, says Tibbs of Drexel University, who conceived the idea and pitched it to Cummings of West Virginia University. A faculty development grant from Drexel provided funding to bring in speakers and to simulcast the seminar to the West Virginia law students.

The West Virginia students traveled to Philadelphia to attend the last lecture of the seminar and, along with the Drexel students, were surprised by Chuck D, who appeared at the last class to talk to the students about what they had learned.

“These were magical moments where students were able to have deep conversation outside of standard legal doctrine,” Tibbs says. “It was fulfilling to the students and to the speakers.”

Cummings describes the class as a “progressive, enlightened approach to how we might rethink law in the future.”

While much of hip-hop music and culture focuses on crime and punishment, Tibbs and Cummings are quick to say that the class focused on more than the criminal justice system.

“There are lots of ways to investigate the law that aren’t necessarily connected to hip-hop artists critiquing the criminal justice system or the American Constitution,” Tibbs says. “There are foundational principles such as contract, civil procedure and of course criminal law and criminal justice.”

Free speech, First Amendment rights and intellectual property issues also come into play. Cummings notes how copyright cases have affected creativity and accessibility by requiring licensing for even “de minimis” sampling of music—an integral part of hip-hop songs. “So often our laws are developed from the top down,” he says. “Hip-hop critiques the law from the bottom up.”

Tibbs and Cummings’ anthology is a compilation of the lecture series. They hope the text will serve as a foundation for future courses about hip-hop or popular culture. The two plan to have the anthology completed in the next year.