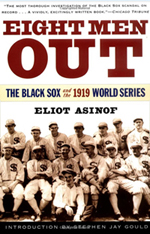 For 90 years the reputation of Chicago White Sox outfielder “Shoe­less” Joe Jackson has been tarnished by the be­lief that he and seven of his teammates threw the 1919 World Series to the Cincinnati Reds. The Black Sox scandal was seemingly validated by Eliot Asinof’s historical account, Eight Men Out.

But two Chicago lawyers who have been investigating historical records of the case say what they’ve found may not only clear Jackson but also raise questions about Asinof’s research.

Dan Voelker and Paul Duffy are not the first to try to exonerate Shoeless Joe and his fellow teammates, but they just may be the only ones to scrutinize Asinof. His Eight Men Out has long been considered the definitive account of the 1919 World Series scandal.

“The only fact that’s been proven is that Shoeless Joe took $5,000 after the Series was over,” Voelker says. “For 90 years, newspaper reports have said he confessed. He never did. He always maintained his innocence.”

Duffy and Voelker, both of Freeborn & Peters, note that in a 1920 trial and in a 1924 civil case, Jackson denied participating in the alleged scheme to accept money from gamblers and mobsters in exchange for purposely losing the World Series. As others have, they point to Jackson’s sta­tistics—a .375 batting average, five runs scored, six runs batted in, and the only home run in the Series—as on-the-field evidence that he did not take part.

A firm client helped Duffy and Voelker get a firsthand look at some never before publicly seen documents relating to the Black Sox scandal, including reports of private detectives hired in 1920 by then-White Sox owner Charles Comiskey. The detectives reported no evidence of wrongdoing. They also were some of the first people to review Asinof’s personal files relating to Eight Men Out, which had been sold by the writer’s estate to the Chicago History Museum. The files included information from his 1979 book, Bleeding Between the Lines, about the story behind the development of Eight Men Out.

Duffy and Voelker say their research led them to question the credibility of Asinof’s research. They say the following examples from Asinof’s personal files help show why they now believe Eight Men Out may be more a work of fiction than accurate historical account:

• A list that Asinof prepared of people he claimed to have talked to included a purported killer known as “Harry F” who threatened a player in on the fix. Asinof later admitted in Bleeding Between the Lines that Harry F and another character were invented in anticipation of a movie deal —so that others could not steal his story and claim they had taken it from the public domain.

• Though he was heavily quoted in the book, a Sept. 15, 1961, letter from Black Sox pitcher Eddie Cicotte declined Asinof’s request for an interview.

• The fact that Asinof re­lied on second- and thirdhand newspaper articles about the closed 1920 grand jury proceedings, even though transcripts were heavily quoted in a 1924 civil case.

“We were surprised at how little was there,” Voel­ker says. But, he adds, “I don’t know what we would find. Something that says, ‘I made it up?’ ”

Says Duffy: “For a book that purports to be the de­finitive source on this, you would think we would have found more evidence. That, in itself, is a smoking gun.”

Read more about Eliot Asinof’s research for Eight Men Out.