The Holocaust, international law and a family's fate intersect in one Eastern European city 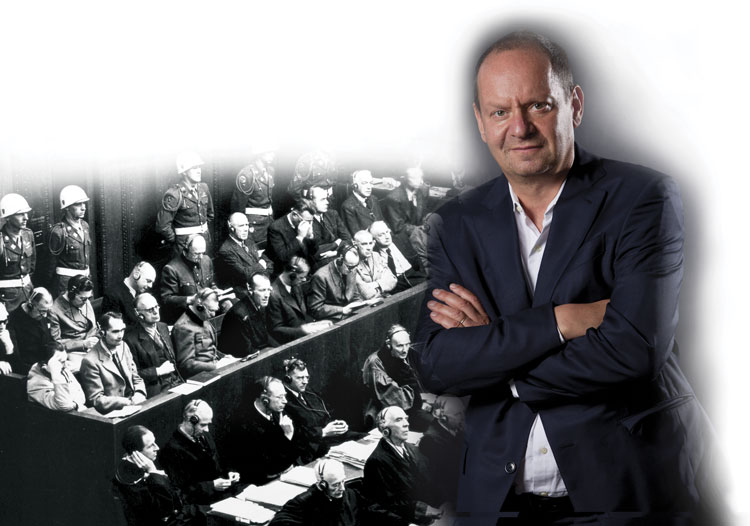 Philippe Sands weaves the stories of individuals against the backdrop of history, including the legal redemption of the Nuremberg trials. Photo illustration by Bob Fernandez/AP Images

Like most life-changing journeys, the path of professional and personal discovery that Philippe Sands has traveled over the past several years started with a modest first step.

In 2010, Sands, a barrister in London whose work included numerous cases that involved alleged human rights violations, including genocide and crimes against humanity committed during civil wars and other conflicts, was invited by the law faculty of the Ivan Franko National University of Lviv in Ukraine to lecture on his work in the human rights field.

Lviv is off the tourist path, but it encapsulates Europe’s bloody history during the 20th century. Between the early days of World War I in September 1914 and the closing days of World War II in July 1944, control of the city changed eight times, including the Austro-Hungarian Empire, Russia (before the revolution), Poland, Nazi Germany, the Soviet Union and, today, Ukraine.

The city’s changing fortunes are reflected in the various names it has been given over the years: The Poles called it Lwow; the Soviets identified it as Lvov; and the Germans named it Lemberg.

The city enjoys a rich cultural and intellectual history. Its university was founded in 1661, and Sands was drawn to the fact that two of the leading originators of international criminal law principles—which would play an important role at the Nuremberg trials of Nazi leaders following the end of World War II—attended the law school at the Lviv university within a few years of each other. They had studied international law under the same professor.

Without the efforts—and persistence—of those two legal innovators, the Nuremberg trials and the subsequent growth of international criminal law would have unfolded in a much different way, says Sands, a professor and director of the Centre on International Courts and Tribunals at the University College London.

Hersch Lauterpacht and Raphael Lemkin devoted much of their professional lives to defining and advancing the legal grounds for holding perpetrators responsible for atrocities committed in the course of conflicts. But they approached the issue from different directions.

Lauterpacht focused on the killing of individuals as part of a systematic plan—what he called “crimes against humanity.” Lemkin studied the killing of many individuals with the intention of destroying an entire group—and coined the term genocide.

But Sands had another, more personal reason to accept the invitation to lecture at Lviv. His grandfather, Leon Buchholz, was born there.

Sands knew his maternal grandfather well. Buchholz had attended Sands’ wedding in New York City, and Sands visited him many times in Paris, where he lived in his later years before his death in 1997. But he did not talk about the years before 1945, so Sands viewed the trip to Lviv as an opportunity to try to fill in some gaps in the family history.

That quest required Sands to engage in some serious detective work, but he was up to the task.

“I’m a litigator, and litigators are like a dog with a bone—once you’ve got it, you don’t let go,” Sands says. “I’ve got an inquiring mind. I’m curious about things.” Nevertheless, he says, “I was stunned” to discover the connection between his grandfather, Lauterpacht and Lemkin. “That invitation opened a door.”

Sands’ research revealed numerous coincidences. Lauterpacht’s son Elihu, for example, was one of Sands’ teachers and mentors at the University of Cambridge in England.

But they knew each other for three decades before they realized that Lauterpacht and Sands’ great-grandmother had lived on the very same street, known as East West Street, in the town of Zolkiew near Lviv.

Sands did not plan to write about the experience. But at a meeting with his editor, he was describing the trip to Lviv, and the editor urged him to consider writing a book. East West Street: On the Origins of “Genocide” and “Crimes Against Humanity” was the result, which was published in 2016 by Alfred A. Knopf.

East West Street is a work of nonfiction. But as it weaves the intertwining stories of individuals against the backdrop of the sweep of 20th-century European history, including the Holocaust and the legal redemption of the Nuremberg trials, the book takes on a novelistic tone.

This article first appeared in the September 2017 ABA Journal with the headline “Crossroads of History.”