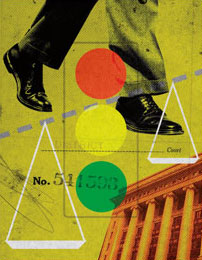 Immigration law isn’t necessarily a haven for unscrupulous practitioners. But it often seems that way, say lawyers in the field. Generally, state disciplinary agencies don’t track complaints and actions against lawyers on the basis of their fields of practice. “Like every other board of professional responsibility, most of our complaints are related to criminal or domestic relations matters,” says Krisann Hodges, disciplinary counsel for the Tennessee Board of Professional Responsibility. “Complaints against immigration lawyers aren’t leading the pack. But they’re not at the bottom, either.”

What does stand out about the immigration law field is the cavalier way in which some practitioners interpret their ethical obligations to clients.

“I once heard an immigration lawyer who had a reputation for unethical behavior say, ‘I’ve never had to worry about being sued because my screwups get deported,’ ” says Gregory Siskind, a principal at Siskind Susser, an immigration firm in Memphis, Tenn.

The lawyer cited by Siskind was right about one thing: The outcome of cases that are mishandled by counsel can have a devastating impact on clients, often including lengthy detentions and deportations that shatter families. Clients can be susceptible to unscrupulous, or careless, lawyers because of language barriers and their reluctance to initiate contact with government authorities in efforts to undo the mistakes of counsel.

“First, you have a vulnerable population,” says Peter S. Margulies, a professor at the Roger Williams University School of Law in Bristol, R.I. “People often don’t know their rights or understand the legal system and therefore are almost sitting ducks for predatory professionals. And unfortunately, there are some people around—not necessarily many—who are predators. It’s the combination of a high volume of clients and a vulnerable population that makes for the horror stories.”

Immigration law also has its fair share of gray ethics areas that vex even the most assiduous lawyers. One of the toughest dilemmas, says Karen T. Grisez, who chairs the ABA Commission on Immigration, is balancing the duty of zealous representation of a client with the constraints of the immigration courts.

“There are sometimes long periods of delay in getting to your hearing, but the actual court time can be very short,” says Grisez, the public service counsel at Fried, Frank, Harris, Shriver & Jacobson in Washing ton, D.C. “You often have a dilemma with how much evidence to present in the amount of time you have for a hearing. That’s more of a problem than in other fields because, for example, at least in criminal cases, the defendant has due process rights that aren’t the same in immigration courts.”

Another quandary is recognizing when it becomes unethical to continue representing both clients in a dual-representation case. “You’ll have a husband and wife, or a parent and child,” Grisez says. “They start out on one page, and then the relationship falls apart. It can come up when a marriage case turns into a battered spouse case. Can you continue representing both?”

A case that illustrates how many of these issues play out was decided by the Tennessee Supreme Court in 2010. Ruling in Flowers v. Board of Professional Responsibility (PDF), the court largely affirmed a decision by a hearing panel of the board that Timothy D. Flowers, an immigration lawyer in Memphis, should be suspended from practicing law for a year for ethics violations relating to his representation of seven separate clients and should make restitution to three of those clients for fees paid to him for work he didn’t do. (The suspension later was extended to three years after publicity about the case triggered more complaints against Flowers, according to Hodges, who represented the board before the supreme court.)

One of Flowers’ arguments was that immigration law is so complex that Tennessee’s Professional Responsibility Board had no business judging his actions, especially in proceedings before federal bodies, including the Immigration Court, the Board of Immigration Appeals and the U.S. Court of Appeals. The federal immigration law system does, in fact, have a structure for handling complaints against lawyers and other practitioners in the immigration field. Since 2000, that responsibility has been handled by the Executive Office for Immigration Review in the U.S. Department of Justice.

The Tennessee justices viewed the issue differently. “This court is the final and ultimate arbiter of the propriety of the professional conduct of all lawyers practicing in Tennessee,” they concluded.

Among his other arguments, Flowers asserted that the hearing panel should have discounted the claims by his clients because filing disciplinary complaints is a common tactic used to reopen immigration cases.

Rejecting that argument, the court stated in its opinion that the motivations of his clients to file disciplinary complaints against him “does not render these complaints frivolous and certainly does not nullify or undermine the findings of the hearing panel and the trial court.”

Flowers also argued that the delays caused by both his inaction and his filing of 18 appeals that he never followed up on actually benefited clients by keeping them in the country longer in accordance with what he called “sound immigration practice,” and therefore were not frivolous. That argument failed, as well. While the court affirmed that it “will strongly safeguard the zealous representation of clients by attorneys, we will not accept lawyers abandoning their professionalism in the interest of mercenary tactics that violate the requirements of the Rules of Professional Conduct.”

While largely rejecting Flowers’ argument that he effectively communicated with his clients despite language barriers and their inability to read, the court acknowledged that the issue “warrants close examination and studious reflection.” The court affirmed his argument that there was insufficient evidence regarding what constitutes a reasonable fee for immigration cases that go to the U.S. Court of Appeals.

“The issue getting the most buzz is Flowers’ communication with clients,” says Hodges. “We were basically presenting the idea that when you had clients who had language barriers, it was more important to establish a written record that you made attempts to communicate. The practical realities of communicating with a client like that may be a little different, but it doesn’t mean there’s no ethical obligation to try.”

Some of the issues raised in Flowers sound familiar to Anthony Guidice, an immigration lawyer in Rochester, N.Y. “I’ve heard lots of times from foreign nationals, ‘This guy said he’d help me, he took my money, and I never heard from him again,’ ” Guidice says. “There are millions of potential clients, and outdated laws sometimes prohibit lawyers from doing anything for them. But lawyers imply they can do something just to get a fee. It’s called false hope, and clients don’t know any better.”

Guidice also complains that too many lawyers in his field fail to return unearned fees. “Let’s say you charge to do a cancellation-of-removal case,” he says. “After your client pays you, you examine the case in depth and find there’s an aggravated felony charge you can’t get around that prohibits you from obtaining that relief for your client. Ethically, the thing to do is to tell the client and refund the fees you didn’t earn.”

Siskind focuses on a different concern. “I worry most about the two-person firms that list 10 practice areas—including things like immigration and bankruptcy,” he says. “The chances of malpractice in immigration go up immensely if you’re not immersed in it.”

Grisez says increased training for immigration lawyers would reduce the number of ethics violations that occur in the field. She would also like to see more states use consumer protection laws to nab unethical lawyers and practitioners like notarios—notaries public who are widely viewed in Hispanic communities as being essentially the equivalent of lawyers.

More reporting from institutional players also could make a difference. In a field in which many clients are reluctant to report abuses by their attorneys, other stakeholders in the system—including opposing attorneys and those who step in later to try to fix bungled cases—may have to take more responsibility for reporting wrongdoers to disciplinary authorities.

But such efforts can produce mixed results. In what he acknowledges was a rare instance, Siskind reported a colleague who charged clients a hefty sum for an immigration matter but didn’t file a single document on their behalf. Siskind represented the clients pro bono when they turned to him six months later.

“I felt bad for the results,” he says. “The lawyer was disciplined and put on some kind of supervision. The few other immigration lawyers in town had to spend a lot of time overseeing the work for this other lawyer. I felt that was like punishing the wrong party, and I don’t think the lawyer cared about being disciplined.”

The ultimate fix may simply be an influx of more of the profession’s best and brightest. “The federal government has a good-faith interest and is trying to do more,” Margulies says.

“State regulators are trying to do more, as well. But there aren’t enough competent practitioners to do all the work,” he says. “That’s the most pressing problem. The best cure is getting more good lawyers.”