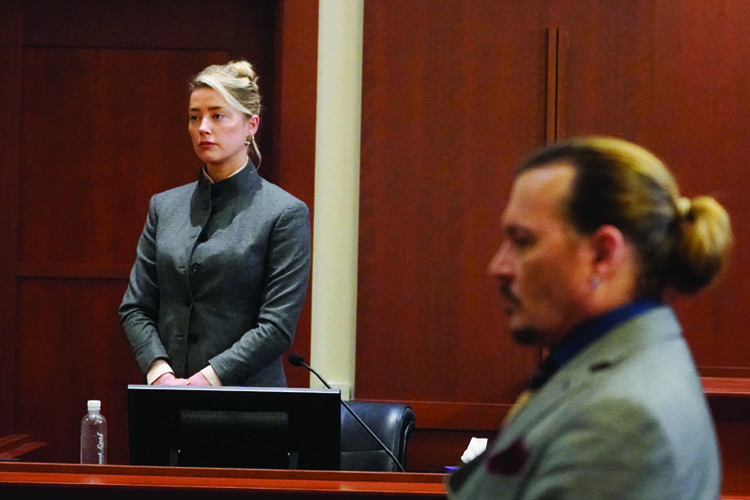 It was hard to avoid hearing about Johnny Depp’s $50 million defamation suit against ex-wife Amber Heard and the subsequent trial, even if you tried. In addition to the seemingly 24/7 streaming of trial content on the Law & Crime network, E! News and countless YouTube channels, there were also billions of TikTok viewers absorbing details of the trial, in which Depp argued that Heard defamed him in a 2018 Washington Post op-ed when she described herself as a “public figure representing domestic abuse.”

Heard countersued, saying Depp defamed her when his then-lawyer accused her of perpetrating the abuse hoax. In June, the jury found that Depp had proven defamation in regard to three statements in Heard’s op-ed, and that Heard had proven defamation on one statement from Depp’s former attorney. The jury awarded Depp $10 million, while Heard was awarded $2 million. In July, both parties filed notices of appeal, meaning a sequel could be in the works.

Bite-sized snippets of everything from Depp’s half-smiles to Heard’s allegedly fake tears to her lawyer’s questioning paired with the theme song from Curb Your Enthusiasm were blasted over TikTok. Videos of Depp and his legal team laughing and eating candy while Heard’s lawyers presented their case went viral, as did clips of Depp’s attorney, Camille Vasquez, objecting repeatedly during Heard’s testimony. Oftentimes, the videos had titles like “Johnny Depp’s lawyer destroys Amber Heard” or “Amber Heard’s lawyers get roasted by TMZ!”

The hashtags #JusticeForJohnnyDepp and #AmberTurd—after an allegation that Heard defecated in her and Depp’s bed—each got more than a billion views and appeared to have completely hijacked the case. The videos overwhelmingly sided with Depp: As of early September, #JusticeForJohnnyDepp had racked up 21.6 billion TikTok views; #JusticeForAmberHeard had accumulated 132.4 million. Was a court verdict even necessary when TikTok had already declared a victor?

The entire case has attorneys worried.

“The burden is on the lawyers—and to some extent, on the trial judge—to use with greater vigor than in the past available tools like meaningful juror questionnaires and extended voir dire,” says Jack Sharman, partner and chair of the white-collar criminal defense and corporate investigations practice group at Lightfoot, Franklin & White.

According to a study of 2,300 Twitter accounts, Cyabra, a firm in Israel that tracks online disinformation, found that 11% of the conversation surrounding the trial from March 13 to April 16 was driven by fake accounts, compared with just 3% to 5% of the fake accounts narrating any average online conversation.

While this isn’t the first trial to be publicly broadcast and dissected by the public (readers of a certain age might remember “If if doesn’t fit, you must acquit”), it may be the first major trial to be disseminated by social media. The public, which overwhelmingly sided with the Pirates of the Caribbean star, chose snippets of the trial to broadcast via TikTok highlighting what they deemed as wins for the Depp team, while every stutter, every slip by Heard’s legal team was amplified online by Depp fans ready to attack.

“Seeing things like this on social media can be disheartening for attor- neys and parties to a trial, and there’s a possibility that it could also affect witnesses who are preparing to testify, so TikTok definitely could affect testimony at a trial or lead to heightened emotions while on the stand,” says Sabrina Shaheen Cronin, the founder and managing partner of the Cronin Law Firm in Bloomfield Hills, Michigan.

Law firms are wondering what steps they can take to prevent bias like this going forward. And if they can’t prevent it, how can they use social media apps like TikTok in their favor?

The biggest issue is the jury. While jurors are instructed not to look at media during trial, it’s important to make sure they’re sequestered and don’t have access to social media, which is nearly impossible, says Andrea Sager, owner of Andrea Sager Law and Associates and CEO of the Legalpreneur in Houston.

Throughout the case, attorneys should follow jurors’ social media accounts, and jurors who comment on things they have seen or heard should be removed, says Clyde Guilamo, a Chicago criminal defense lawyer. This job is generally not done by trial counsel, but by someone on the trial team who is familiar with social media, he says.

While attorneys and courts don’t have much power to control what is said about cases or the light in which things are reported, they do have some control over whether the information is disclosed at all, Cronin says.

In some states, depending on their particular laws, courts can determine that a case is too sensitive or the parties in the case could be harmed by public opinion and decide that the courtroom will be closed, meaning they will not allow cameras or recording devices inside, she says.

“Doing this, however, does not ensure that someone in the courtroom won’t talk to a reporter outside of the room, or that a reporter won’t attend the trial and take notes themselves,” she notes.

Courts can also determine that certain information is protected and not to be released to the public during trial. This means the court would enter an order stating that the information is to be confidential and only discussed in the courtroom with the judge, and someone who violates this rule would be subject to punishment from the court, Cronin says.

It’s also important for the attorneys to request that the court issue an order directing the attorneys, witnesses, jury and anyone present at the trial not to share any information about the trial on social media during the litigation.

“If the court declines to issue the order, then it is up to the attorney to speak with the jury at the time of jury selection, opening and closing statements with regard to refraining from drawing their opinions from social media, and to only base their decision on the evidence produced at trial,” says Sandra Radna, a New York divorce attorney.

One of the issues is that lawyers are often too hesitant to address the topic directly for fear of alienating jurors, Sharman says. The standard admonitions from the bench to not look on Facebook are usually of only modest effect: Lawyers and judges need to be more blunt, he says.

Jury instructions from every state contain guidance about the use of social media, but these instructions are frequently buried or are an afterthought, says Adam Zayed, managing attorney and founder of Zayed Law Offices in the Chicago area. It would be reasonable, he says, for jury instruction committees in each state to consider a specific instruction regarding social media.

“Some might suggest that threatening potential jurors with contempt of court in the event of improper social media usage is the way to go, but generally, we think informing them that this type of conduct may lead to a mistrial and thus, a waste of everyone’s time is the better approach,” Zayed says. No juror wants to waste everyone’s time and to undermine the system. Zayed says another idea would be to reiterate the instructions every day of the trial rather than once before the trial begins.

On the other hand, attorneys could use social media to their advantage, as Depp’s team appeared to do, whether purposely or not. He and his attorney appeared to flirt as they shared candy and offered each other secret smiles.

If the budget allows, Sharman says, a firm could hire a sophisticated team to monitor social media traffic. “Such monitoring could provide an input into juror mindsets and potentially help shape arguments,” he says, adding that this could have obvious ethical implications.

According to Rule 3.5 of the ABA Model Rules of Professional Conduct, lawyers are not allowed to influence jurors or prospective jurors by “means prohibited by law,” and ABA Formal Opinion 480 restricts lawyers’ ability to use social media to engage in public commentary.

Ethically, it would be an issue if an attorney were commenting via social media about a case they’re actively trying, says Michael Elkins, partner and founder of MLE Law in Fort Lauderdale, Florida. “However, an attorney with a good social media presence in advance of a high-profile case should continue putting out their regular content and building their brand,” Elkins says.

This story was originally published in the October/November 2022 issue of the ABA Journal under the headline: “Trial by TikTok: How social media hijacked the Depp v. Heard defamation trial.”