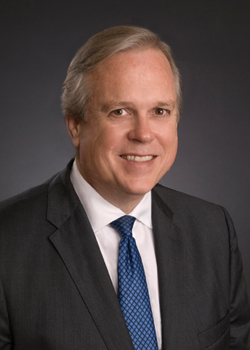 Michael Clark: Ebola is at the intersection of human rights, science and the law. Photo by Kate Marvins Photography.

Almost from the moment a U.S. hospital received its first patient from the current Ebola outbreak in West Africa, the possibility that the disease could spread to this country became a matter of legal concern as well as a potential medical crisis.

The quick response by the legal profession is a good thing, according to Michael E. Clark, who chairs the ABA Health Law Section. Even though only a handful of Ebola patients have been treated in U.S. medical facilities, the outbreak presents many interesting and difficult issues because it lies at the intersection of human rights, science and law, says Clark, a special counsel at Duane Morris in Houston.

Lawyers already have been asked to weigh in on legal issues such as how best to protect the privacy rights of patients and help guarantee health workers' safety. Lawyers also have provided advice on the extent to which states may impose quarantines, and whether airlines and shipping companies may restrict travel by individuals. Lawyers say many clients, particularly those in the health care field, have called seeking information about how Ebola might affect their labor and employment, human resources, risk management and environmental policies.

Some law firms have put together teams to advise clients on legal issues relating to the outbreak. In October, for instance, Reed Smith, an international law firm headquartered in Pittsburgh, launched a Global Ebola Task Force after clients in a range of industries began asking questions about how they might be affected. "We saw that this issue really involves multidisciplines," says Patrick E. Bradley, a partner in the firm's Princeton, New Jersey, office who heads the task force. "Primarily, companies are trying to be proactive and trying to avoid overreaction."

The outbreak has caused many of Reed Smith's clients to consider how their business activities are affected by events in Africa, says Patrick F. Rice, a task force member. "This event, or series of events, has caused clients to see what touch points they have in Africa, whether it be employees to whom they have responsibilities, sales channels that go into Africa, whether they source things from Africa," says Rice, a partner in the firm's New York City office and a member of its Africa business team.

The Health Law Section also moved quickly to help inform its members and other lawyers about legal issues arising out of the Ebola outbreak. Educational initiatives are an important element to an effective response to the crisis, especially given its fast-changing dimensions, and the high levels of misinformation and fear that have been triggered by the disease, Clark says.

On Oct. 30, the section sponsored a webinar, Ebola 2014: A Public Health and Legal Perspective. A week later, Clark moderated a "tweet chat" on issues related to Ebola. (A tweet chat is a way for a conversation involving multiple parties to take place over Twitter.) And the section's annual Health Law Summit, held Dec. 8-9 in Washington, D.C., featured a program titled "What You and Your Clients Should Know about Responding to Ebola and other Health Threats."

Among the speakers at these programs were Montrece Ransom, a public health analyst at the Centers for Disease Control and Prevention in Atlanta; Melissa L. Markey, an attorney at Hall, Render, Killian, Heath & Lyman in Troy, Michigan, who is an expert on pandemics; and Kirk J. Nahra, a partner at Wiley Rein in Washington, D.C., who chairs the firm's privacy group and co-chairs its health care group.

A book that addresses issues raised by Ebola and other infectious diseases is in the works at ABA Publishing. Infectious Disease Law, Regulation & Policy is slated for publication this summer. The book is co-sponsored by the Tort Trial and Insurance Practice Section, and the author is James T. O'Reilly, a volunteer professor at the University of Cincinnati College of Law and past chair of the Section of Administrative Law and Regulatory Practice.

Health care workers remove the body of a man they suspect died of the Ebola virus on the outskirts of Monrovia, Liberia, in November. Many U.S. businesses have concerns relating to personnel in Africa, sales channels that extend there and products sourced from Africa. Photo by AP Photo/Abbas Dulleh.

Ebola spreads by direct contact (through broken skin or mucous membranes) with bodily fluids—saliva, blood, urine, stool, tears, semen, sweat, even breast milk—from a person carrying the virus who has begun to manifest symptoms, including fever, severe headaches, vomiting, diarrhea, intense weakness, bleeding and muscle or abdominal pain. Ebola also can be transmitted through contaminated clothes or bedding. The virus normally has an incubation period of anywhere from two to 21 days. A vaccine is in early stages of development and testing.

The current Ebola outbreak, which the CDC estimates is the worst since the disease was first identified in 1976, was centered in the West African nations of Liberia, Sierra Leone and Guinea. However, limited numbers of cases have been reported in Mali, Nigeria, Senegal, Spain and the United States, where Ebola became a local story in August when a handful of patients began arriving for treatment in U.S. hospitals. Two American nurses contracted the disease after treating patients who were brought to this country. 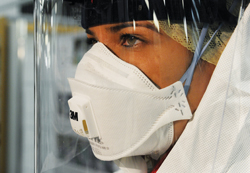 As of mid-November, 10 Ebola patients had been treated in the United States; two of them died, and the others recovered. The overall numbers are much more sobering: According to the Nov. 26 situation report from the World Health Organization, there have been 15,935 confirmed Ebola cases in the current outbreak in all eight countries affected, with 5,689 confirmed deaths.

In this country, states have the broadest legal authority to investigate and control public health outbreaks and protect the safety of citizens under their general police power, according to Ransom, who participated in the Health Law Section's webinar. While that power extends to isolating and quarantining within their borders, she explains, state authorities need to ask whether their actions are reasonable, necessary and proportionate to the situation. Whatever action a state takes, she says, generally must be the least restrictive measure necessary to maintain public health.

The federal government may take its own steps in many areas, legal experts say. In October, for example, the CDC and the Department of Homeland Security announced that they were introducing enhanced entry screening at five major U.S. airports that receive more than 94 percent of travelers arriving from West Africa.

Following that action, at least two states—New York and New Jersey—announced initially that they would impose a mandatory quarantine on health care workers with direct contact to Ebola patients, an action that many believed was overreaching and one that would deter some health workers from traveling to West Africa to help Ebola victims.

A nurse who treated victims in Sierra Leone, Kaci Hickox, brought the issue to the forefront in late October when, upon her return to the United States, she was ordered into mandatory quarantine in New Jersey. When she was released to Maine, that state also attempted to quarantine her, but she defied the order and pursued legal action. In November, she reached a settlement under which she was permitted to travel but was required to monitor her health and report any symptoms during the incubation period, which passed without her contracting the disease.

Nahra points out that much of the complexity of the legal response to any disease outbreak stems from the fact that the competing legal interests of different groups come into play. A patient's right to privacy, for instance, is protected under, among other laws, the Health Insurance Portability and Accountability Act. 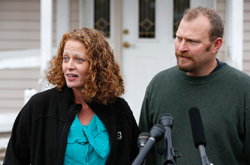 Nurse Kaci Hickox (with boyfriend Ted Wilbur) treated Ebola victims in Sierra Leone; upon her return to the U.S., she was quarantined in New Jersey. Her home state of Maine also tried to quarantine her, but she refused, settling the issue in court and agreeing to monitor her health. Photo by AP Photo/Robert F. Bukaty.

Lawyers at the ABA programs on Ebola noted that some health care employees will start snooping into a patient's medical records, which is a clear violation of HIPAA. Entities covered under the law need to tell their workers that such actions are never permitted, the lawyers said. Two employees at the Nebraska Medical Center in Omaha were fired in September for inappropriately accessing the medical records of an Ebola patient being treated there.

Health care workers have distinct employment rights that might be affected by any disease outbreak, lawyers say. Under the Americans with Disabilities Act, for instance, questions can arise over whether an infected employee may have a disability for which reasonable accommodations must be made. The ADA also covers how much information an employer may request from an employee who calls in sick, when an employer may take an employee's temperature, and whether employers may require employees to stay home if they have symptoms of the disease.

There also are likely to be staff members who are not comfortable taking care of an Ebola patient, in which case the Occupational Safety & Health Administration may become involved, lawyers point out. Under the Occupational Safety and Health Act, an employer has an obligation to provide a safe and healthful workplace, and furnish appropriate personal protective equipment and training; an employer may have to adjust work schedules and rotate assignments to reduce exposure to dangerous conditions. Under the National Labor Relations Act, meanwhile, employees have the right to cease work in good faith because of abnormally dangerous conditions.

Preparedness is the main lesson that health care providers should learn from the current Ebola outbreak, lawyers say. Hospitals and other businesses need to have an emergency operations plan in place, Markey says, not only to respond to the current Ebola threat but also for any future high-risk infectious disease outbreak or other public health emergency.

This article originally appeared in the January 2015 issue of the ABA Journal with this headline: "The Law of Ebola: The ABA's Health Law Section creates learning opportunities for lawyers seeking to advise clients about the impact of the outbreak."