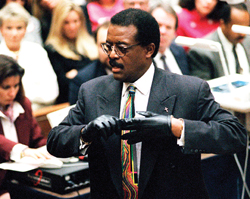 “If it doesn’t fit, you must acquit” was a key part of Johnnie Cochran’s famous closing argument in the O.J. Simpson case. AP Photo/Vince Bucci, Pool File

This young woman was so imbued with narrative prescience that by reading the opening chapter of a novel she could decode the entire text—accurately predicting the trajectory of the plot, the ending of the book, and even the coda of meaning the story's ending conveyed. Brooks' point is that the beginnings of stories imply their plot trajectories and contain their endings; events come into stories only when they push the plot forward toward a climax and resolution that may initially appear surprising but, in retrospect, seem inevitable.

From the first words of the story, every movement of the plot works in anticipation of the story's ending. This is why, as a practical matter, storytellers are taught to know their endings and even to structure plots by working backward from the ending. As Michael Roemer, a literary theorist and filmmaker, puts it: "Every story is over before it begins."

The plots of lawyers' litigation stories, however, differ structurally from the stories told by popular storytellers. First, lawyers present fragmented or broken narratives. Competing stories introduced by the other party interrupt plots. Procedural rules and trial structures fracture narrative into evidentiary pieces that must be reassembled by fact-finders in their deliberations—and narrative instructions are not included with instructions of law. Evidence is admitted piecemeal, and cross-examinations interrupt narrative flow, or "profluence." Further, lawyers are not permitted to speak directly to juries and judges to connect up the evidence, and may not provide crucial interlineations and summary commentaries, except in their opening statements and closing arguments.

Second, legal storytellers at trial must constantly negotiate or zigzag between narrative themes and their legal theories of the case. These two are discrete and irreducible.

How so? Simply put, a narrative theme is the controlling idea or core insight of any story; it is the fundamental understanding or truth about the meaning of human affairs depicted in the story. Narrative themes are seldom, if ever, made explicit; yet themes are the narrative glue binding together the events of the plot.

As novelist John Gardner observed, "theme is not imposed on the story but evoked from within it—initially an intuitive but finally an intellectual act on the part of the [storyteller]."

The analytical theory of the case, however, is always explicit and is organized around readily identified and foregrounded principles, typically the elements of explicit legal rules. Facts are presented in analytical arguments to invoke specifically, rather than evoke metaphorically, the normative principles and legal rules upon which the litigator relies to win. Effective trial attorneys are adept at matching narrative themes with analytical theories, alchemically making the two appear as one.

The third obvious way that story structure in the plots of stories lawyers present at trial differs from that of other popular storytellers is this: Lawyers' trial stories as told are incomplete or unfinished. In its simplest form, classical plot structure includes a beginning, a middle and an ending. A story is obviously incomplete or unfinished without all three parts. As the novelist David Lodge economically describes Aristotle's definition: "A beginning requires nothing to precede it, and an end is what requires nothing to follow it, and a middle requires something both before and after it."

Alternatively, think of screenwriting guru Syd Field's Hollywood version of classical three-act narrative structure for movies: the set-up, the confrontation and the resolution. In Hollywood parlance, a movie's ending should have a big narrative payoff providing a compelling climax and resolution—a morally satisfying yet unanticipated ending completing the causal logic of the plot. Field also adds, without irony: "If you're ever in doubt about how to end your screenplay, think in terms of an 'up' ending. There are better ways to end your screenplay than have your character caught, shot, captured, die or be murdered." This is probably good advice for trial lawyers as well.

Now here's the rub for lawyers: The stories that litigation lawyers tell do not present the structural unity of the completed narrative arc characteristic of a close-ended plot. As Brooks puts it, litigation stories, as told, lack the "narrative closure" of a completed plot structure characterized by "the idea of boundedness, demarcation, and the drawing of lines to mark off and order."

Most especially, the plots of the stories that lawyers typically present in litigation are unfinished stories lacking endings. This is because trial lawyers simply do not have the power to write the endings of their clients' stories. And lawyers cannot fully anticipate which events the jury or judge will credit and incorporate into their plots during deliberations. Consequently, while lawyers struggle to control the ending of a trial story, it is up for grabs—and so is the coda of meaning that will be inscribed upon the tale by jury and judge.

At best, lawyer-storytellers propose implicit endings in their battles of competing stories in the courtroom. But, as the master narratologist Yogi Berra presciently observed: "It ain't over till it's over."

Consequently, trial lawyers must braid together two discrete narrative strands. First, there is a past-tense evidentiary storytelling of what happened before trial. Second, there is a present-tense story being performed at and about the trial itself. In this second strand, the jury and judge are side-participants cast into an active role as characters, called upon to complete the telling and write the ending and coda.

In terms of language theory, the jury thus performs a perlocutionary function, matching the ending of the performative trial story with the past-tense evidentiary narrative in their verdict. The narrative theme (or themes) provides the DNA-like glue that binds together these two discrete yet interlocking stories.

THE INTERSECTION OF PAST AND PRESENT

Johnnie Cochran's famous closing argument on behalf of O.J. Simpson provides an illustration of how the two strands of narrative DNA (the past-tense evidentiary story and present-tense trial story) are twisted together and tightened around the glue of a coherent theme, strongly suggesting an implied ending to an unfinished story. Cochran's legal theory of the case is that incompetent cops botched the murder investigation, and perhaps planted evidence at the crime scene; the elements of murder and Simpson's guilt simply cannot be proved beyond a reasonable doubt.

But Cochran's narrative theme, as is often the case in criminal trials, is based upon a complex betrayal story—about conspiracy and a defendant betrayed by powerful state actors: corrupt cops and a racist police department. It is a story that goes far back into historical time and will go forward into the future unless the jurors act heroically in their deliberations to put an end to it.

These two discrete narrative strands—the past-tense evidentiary story and the present-tense trial story—intersect. Injustice and racial prejudice have morphed into tyranny, resulting in the prosecution of Simpson; systemic corruption and governmental betrayal must be stopped by the heroic jury writing the final ending—a big narrative payoff, an "up" ending—acquittal:

"Things happen for a reason in your life. Maybe there is a reason why you were selected. There is something in your character that helps you understand this is wrong. Maybe you are the right people at the right time at the right place to say, 'No more. We are not going to have this.' What they've done to our client is wrong. O.J. Simpson is entitled to an acquittal. You can't trust the message."

This article originally appeared in the January 2015 issue of the ABA Journal with this headline: "Telling Unfinished Stories: How lawyers can craft a case narrative to spark jurists' and jurors' interest in writing the ending."