How protected should communications between lawyers and a firm's in-house counsel be? 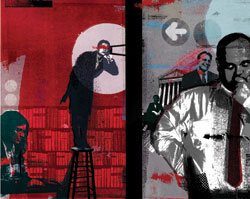 Growing numbers of law firms are employing in-house counsel to help them navigate an increasingly complex environment of ethics duties and regulatory requirements. But the use of in-house counsel also is raising new issues about the relationship between law firms and their clients.

One of the most perplexing questions is whether communications between lawyers and in-house counsel are protected by the attorney-client privilege and the work product doctrine when a dispute arises between the firm and a client.

“This is a case that every law firm and every corporate general counsel’s office should be watching,” says Randy Johnston, who focuses his practice at Johnston Tobey in Dallas on professional malpractice cases. “Because of the increase in the number of law firms that now have in-house general counsel, this issue has started popping up more and more across the country. The previous court cases and ethics opinions on the issues of fiduciary duty and privilege and the exceptions to them have been poorly written—and sometimes poorly reasoned—because they are so often very fact-specific.”

But Johnston and others in the legal malpractice field say the facts in the Georgia case make it an ideal vehicle for examining broader legal questions relating to communications between a firm’s lawyers and in-house counsel.

On Feb. 18, 2008, three lawyers with the Savannah law firm Hunter, Maclean, Exley & Dunn were on a conference call with the CEO of their client St. Simons Waterfront, a condominium developer based in South Carolina.

According to pleadings in the case, Hunter Maclean had drafted real estate sales contracts that were used by St. Simons Waterfront. When the real estate market along the south Georgia coast collapsed, buyers began opting out of their deals, pointing to alleged problems with the contracts. In a conference call with the client, the law firm suggested entering into settlement negotiations. But the CEO of St. Simons Waterfront was livid and demanded that the law firm fight to enforce the deals.

The lawyers for Hunter Maclean took the scolding as a sign that St. Simons Waterfront was planning a malpractice claim against them and contacted the firm’s in-house counsel immediately after the call.

“Within minutes of the conference call, Hunter Maclean lawyers were already taking legal steps to defend themselves for litigation, even though they were still representing the client and would continue to represent the client for another three months,” says John G. Nelson, a partner at Atlanta’s Weissman, Nowack, Curry & Wilco who represents St. Simons Waterfront in the case.

Nelson denies that St. Simons Waterfront was considering litigation against the firm at that time. “Sometimes clients get upset at their lawyers,” he says. “It happens every day.” The problem, Nelson says, is that Hunter Maclean secretly started planning to defend itself against a lawsuit by St. Simons Waterfront, which he maintains created a conflict for the firm.

Later in 2008, St. Simons Waterfront sued Hunter Maclean for malpractice, claiming that the firm breached its fiduciary duties. As part of the discovery process, St. Simons Waterfront demanded to examine more than 20 documents listed on the firm’s privilege log, including a 33-page memo describing the Feb. 18, 2008, conference call that lawyers at the firm wrote the day after it occurred.

Lawyers for Hunter Maclean say that the firm did inform St. Simons Waterfront during the call that new counsel was needed, but it was never put in writing. “The documents and communications sought involve efforts by the firm to investigate, evaluate and consider how to respond to the client’s asserted claim,” says Susan W. Cox, a lawyer at Edenfield, Cox, Bruce & Classens in Statesboro, Ga., who represents Hunter Maclean.

Under the plaintiff’s argument, Cox says, “a law firm would have to immediately withdraw from any further client representation, regardless of the harm to the client and regardless of whether the client consented to the additional temporary and necessary representation, in order to protect its in-house information from disclosure in the malpractice claim. It was impossible for Hunter Maclean to immediately withdraw without causing great harm to the client. Under Georgia and federal law, the attorney-client privilege is interpreted to protect against disclosure of information obtained or shared in a confidential relationship, and that applies equally to communications with in-house and outside counsel.”

The appellate court’s reasoning “makes it too easy for law firms to conceal unethical conduct from clients,” Nelson says. “If the client’s attorneys consult with the in-house attorney—not for the purpose of meeting their ethical obligations to the client but to cover up their own malpractice, and the in-house attorney assists them in doing so—the firm could withhold that information simply because the in-house attorney was ‘segregated’ from directly representing the client.”

Nelson says that, by his count, 15 trial and appellate courts across the United States have ruled in cases with facts similar to the Georgia case. “All 15 ruled for the client,” he says. “The reason is simple: When a law firm represents a current client, the entire law firm’s fiduciary and ethical duties are to that client.”

Others following the case, however, have a different view on what the outcome should be.

“The decision of this court, as a practical matter, will have direct and significant implications to, and impacts upon, how law firms and their in-house counsel nationwide practice and also on decisions of the courts of other states addressing issues of law firm privilege in the future,” states the brief, written by Shari L. Klevens, a partner at McKenna Long & Aldridge in Atlanta.

In a separate amicus brief (PDF) filed with the Georgia Supreme Court, the ABA “takes no position on whether the privilege and work product claims in this case should be sustained.”

But as a general matter, “the ABA urges that lawyers’ communications when seeking legal advice from their in-house counsel should be broadly protected because of the benefits to their clients and the legal system, and to lawyers and their firms,” states the association’s brief. “Lawyers face an increasing array of legal and ethics duties, and the availability of in-house advice, without the cost or inconvenience of seeking an outside lawyer, encourages lawyers to pursue internal investigations where questions of misconduct or malpractice arise.”

Accordingly, states the ABA’s brief, “the privilege should not be abrogated or limited except for compelling reasons.” But this analysis changes “if it is concluded that the client may have a malpractice claim against the lawyer,” states the brief. “Whether the privilege as to further in-house consultations is abrogated or limited during a continuing representation might become a question of fact for the trial court as to whether the client were promptly and adequately informed of the potential claim.”

One group watching the Georgia case closely but with little comment is corporate general counsel. But many corporate GCs privately express concerns about what their law firms may be doing behind their backs.

“Corporate general counsel have every right to be concerned that their law firm is secretly plotting against them and their best interests, and are doing so without notifying them,” Johnston says. “In the end, I think there’s only one solution: Law firms should have the right to internal defense and to work product, but the law firm must immediately inform the client when there is a conflict. Failure to tell the client eviscerates the privilege. Period.”