How the 'Golden Decade' of legal films still influences us today 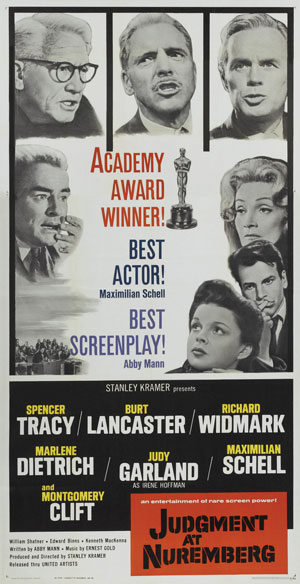 The ABA Journal was first published in January 1915. And during the 100 years since, some of the best movies in each decade have depicted the law and its lawyers—whether ideal or evil—as refractions of contemporary society, and as imperfect agents of justice and its aims. The People vs. John Doe (1916), Blackmail (1929), The Ox-Bow Incident (1943) and M (1951) come quickly to mind.

But in the 10 decades that measure this “ABA Journal Century,” no 10-year period is more significant than 1955 through 1964 for its cinematic depictions of the depth and breadth of the search for justice. Barely 10 years removed from World War II, and only two from the Korean conflict, filmmakers were in no mood to wax nostalgic. And the list of that decade’s legal dramas reads like an existential argument on the nature of lawyers and the law.

Heading the list is To Kill a Mockingbird, the inspiration for several generations of lawyers who have yearned to replicate the folksy integrity of Atticus Finch. Released in 1962, it also captured the depraved, structural racism that endured, even as a softer bigotry had begun assuming its place. In 12 Angry Men (1957), first scripted for TV, a jury deliberating the fate of a young Puerto Rican accused in a stabbing degenerates into the stereotypes and self-loathing that sometimes contaminate justice at its most basic level.

In The Wrong Man (1956), Alfred Hitchcock followed the crooked trail of an actual exoneration. Otto Preminger brought to the screen Anatomy of a Murder (1959), a fictional portrayal of a true-life murder case based on a best-selling novel written by a Michigan Supreme Court justice.

Two of Clarence Darrow’s most famous cases were resurrected in major films that debuted in the decade. In Compulsion (1959), Orson Welles revisited the sordid murder trial of Leopold and Loeb, a case that balanced the sociopathic premise of a carefully plotted murder against Darrow’s passionate arguments against capital punishment. And Spencer Tracy again depicted a Darrow-like lawyer in Inherit the Wind (1960), a dramatization of his defense of the theory of evolution in the Scopes “monkey trial” of 1925.

Welles also produced and directed The Trial (1962), Franz Kafka’s dark parable of justice without crime or evidence. Billy Wilder directed Witness for the Prosecution (1957), a classic Agatha Christie courtroom drama with a delicious twist. And in The Man Who Shot Liberty Valance (1962), a Western, James Stewart is a lawyer rewarded in life for killing a local bully, though the killing itself is discovered to be more complicated than even he knew.

The political application of military justice is skewered in The Court-Martial of Billy Mitchell (1955). The title character is a highly vocal proponent of air power who is convicted of insubordination for criticizing the nation’s lack of preparedness between the two world wars. And in Stanley Kubrick’s breakout, Paths of Glory (1958), three innocent French soldiers are executed summarily for having questioned the wisdom of a suicide mission in World War I.

But the film that anchors the sense of this remarkable decade is Judgment at Nuremberg (1961), a fictional account of the war crimes trial of four German judges accused of placing Nazi laws and policies above essential human rights. Maximilian Schell won an Oscar as the fierce defense lawyer who argues that they were victims of a moral chaos in which justice itself could not survive.

These titles define a golden decade for legal films—films of unsurpassed breadth, extraordinary literary judgment and philosophical substance; films that have endured for 60 years, and still counting.

This article originally appeared in the August 2015 issue of the ABA Journal with this headline: “The Golden Decade: For 60 years and counting, these films endure.”

A Century of Legal Films

This year marks the 100th anniversary of the ABA Journal, so we’ve been exploring the legal and cultural history of the past century. For our annual pop culture issue, we looked for the best legal movies released in the decades since our launch in 1915. What follows is our list of the most important and influential legal movies for each decade, along with comments from some of the jurors who helped us with our picks.

To determine the ballot and make selections, jurors used criteria adapted from Professor Christine A. Corcos, who created a list of must-see movies for law students.

Jurors considered the following six elements when choosing the most important and most influential movies of the defined decades: