How to start a sentence: Consider all your alternatives, and sprinkle in some conjunctions, too

As professional rhetoricians, readers of this column should know what the most important part of a sentence is: the end. Many writers mistakenly think it’s the beginning: They begin a disproportionate number of sentences with the grammatical subject, and they rarely depart from the subject-verb-object pattern. Boring legal writers create paragraphs of sentence after sentence beginning with a client’s or litigant’s name; interesting writers, by contrast, spice their prose with syntactic variety.

But to say that the end of a sentence should pack a punch isn’t to say that the beginning is unimportant. Most authorities agree that it’s the second most important position. Often it provides the setup for what follows. A sentence might begin with an adverbial of time: “Last April, John died.” Or maybe it would include an adverbial of place: “While visiting Columbus last week, John died.” Notice how the poignancy is lost if we were to write: “John died last April” or “John died while visiting Columbus last week.”

Of the who-what-when-where elements of exposition, when and where often occur toward the beginning of a sentence, and who and what just after.

Keep in mind two principles for creating readable prose: (1) A fair percentage of sentences should begin with short contextualizing phrases, often adverbial. (2) A fair percentage should begin with one-syllable transitional words—normally But, Yet, So or even And. These principles are intended to dispel two widely circulated superstitions—to the effect that writers shouldn’t do either of those things. But if you analyze high-quality writing and the teachings of reputable writing specialists, you’ll find these qualities are highly desirable.

As an empirical matter, in high-quality (professionally edited) published writing, you’ll find that typically less than 50 percent of the sentences begin with the noun that functions as the grammatical subject. Some 10 to 30 percent of the sentences will begin with adverbial phrases. And 10 to 20 percent will begin with conjunctions—either subordinating (If, Because, Although, etc.) or, more commonly, coordinating (But, Yet, And, So, etc.). These stats mean that skillful writers vary their syntax. They don’t get stuck in a rut.

There’s a superstition abroad that sentences should not begin with prepositional phrases (which typically introduce adverbial elements). Where this canard comes from is anybody’s guess. It leads to ungainly sentences like this one:

Johnson denied in his deposition that he had ever been at the fairgrounds.

In his deposition, Johnson denied that he had ever been at the fairgrounds.

Or another lumbering example:

The judge cited in her decision summarily denying Redell’s petition a concern that the entire budget could be depleted on just a few large fuel-cell projects.

That sentence could be punched up by starting with the adverbial phrase, allowing you to keep subject and verb together:

In summarily denying Redell’s petition, the judge cited a concern that a few large fuel-cell projects could deplete the entire budget.

Note that the revision also puts the oomph at the sentence’s end.

I sometimes wonder whether lawyers who ask me if it’s wrong to start a sentence with a preposition aren’t confusing their parts of speech: It’s the sentence-starting conjunction that schoolteachers traditionally, and erroneously, warn against. 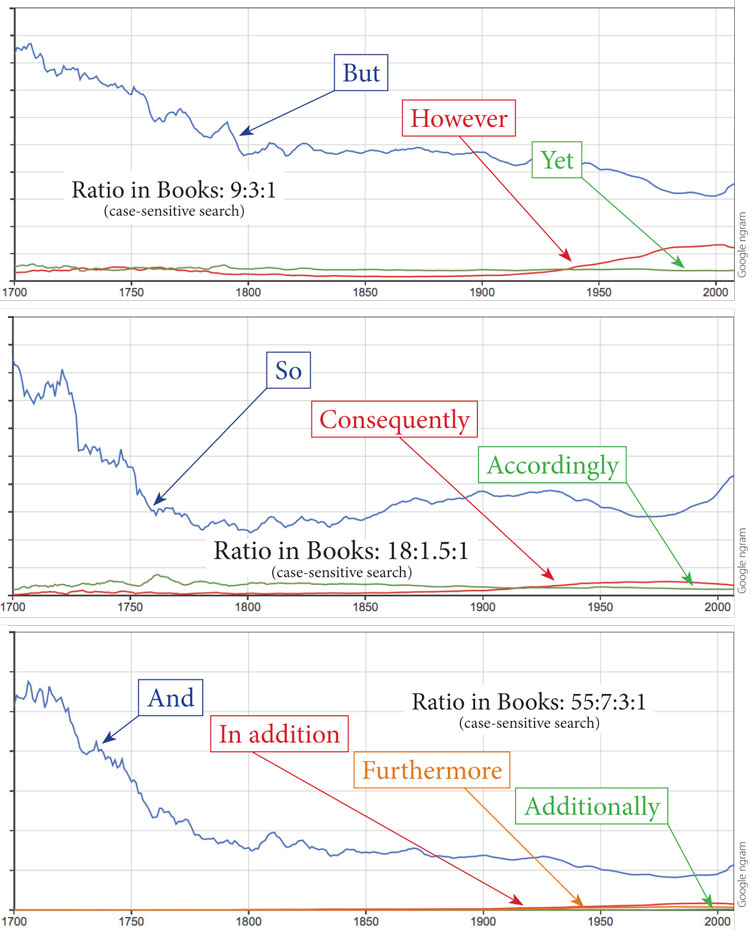 As professional writers have long known, conjunctions are a terrific way of starting a fair number of sentences. They’re typically one-syllable starters that tie one sentence to another quickly and tightly. Consider these examples—just a few of countless possibilities—by major legal writers:

But: “This simple—almost austere—style is much harder to maintain when wading through the morass of legal doctrine. But it is surely worth striving for.” (Peter Tiersma)

Yet: “Some writers appear to treat duration as the criterion for distinguishing between ownership and lesser interests. Yet the holder of an easement, like the owner of land, has a transmissible and indeterminate right over it.” (Tony Honoré)

So: “Although his feet and body were pretty cold, he could move around and manage to stand this. So he stayed and sold out his papers and went back home about the usual time.” (Clarence Darrow)

This conjunction-as-starter word choice surprises many who haven’t seriously studied the art of writing after high school. What happens, normally, is that when grade-school children first start learning to write, they quickly become addicted to And at the head of a sentence—sometimes in almost every sentence. In trying to wean them off this bad habit, their teachers overcorrect by imposing an absolute prohibition against sentence-starting conjunctions.

Some of those kids grow up to be lawyers, who in law school became accustomed to ponderous prose. They like multisyllable sentence-starters such as However, Accordingly, Consequently, In addition, Additionally and Furthermore. Grammatically, there’s nothing wrong with these cumbersome connectives; it’s just that they weigh down the prose.

Some readers might counter: “Why use connectives at all?” The answer is that it’s a cardinal rule of smooth stylists to make the prose flow, and the best way to achieve fluid, readable prose is to join sentences and paragraphs as smoothly as a carpenter joins boards. Or, to change the simile, sentences and paragraphs ought to be joined as surely as railroad cars are joined into a full train. In fact, the expert use of connectives—especially the single-syllable ones like But, Yet and So (none followed by a comma)—is probably the greatest subliminal contributor to cogency and clarity in prose.

It’s always been so. In the accompanying charts, you’ll see some case-sensitive big-data searches comparing alternative sentence-starters in millions of English-language books. The start date is 1700. Notice the frequency with which But has always been at the head of sentences; only recently has However started to close in—doubtless because of the fear instilled by those misguided teachers. (Remember, too, that many of these Howevers aren’t the contrasting ones, but instead the ones that mean “to whatever degree.” Those Howevers are unobjectionable.) As a sentence-starting adversative, as grammarians call it, But has always greatly outpaced the contrasting However.

If these points surprise you at all, then start being more alert when you’re reading stuff that you enjoy. You’re sure to find a fair number of capitalized Buts not followed by a comma—probably twice as many as Ands. But very few Howevers. n

Bryan A. Garner, the president of LawProse Inc., is the co-author of two books with the late Justice Antonin Scalia:

Making Your Case and Reading Law. In January, Simon & Schuster will release his memoir Nino and Me: My Unusual Friendship with Justice Antonin Scalia. Follow on Twitter @bryanagarner.