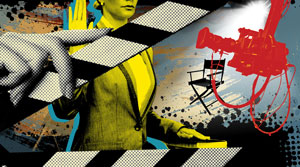 Character is crucial in most popular storytelling practices. Most especially, it is at the core of the modern novel. The late literary critic and novelist John Gardner observed that at "the center of all great literature is character."

Whatever else may be said about Hollywood movies, they certainly are not primarily about developing complex characters. Characters and characterization in the movies are typically subordinated to plot. Some of this has to do with the virtues and limitations of filmic story-telling—for example, movies cannot usually go within characters’ thoughts to explore their interior lives.

In the simplified parlance of Hollywood, movies are “plot-driven,” while novels are “character-based” or “character-driven.”

With understandable polemic exaggeration, novelist and screenwriter E.L. Doctorow puts it this way:

“Fiction goes everywhere—inside, outside, it stops, it goes, its action can be mental. Nor is it time-driven. Film is time-driven, it never ruminates, it shows the outside of life, it shows behavior. It tends to the simplest moral reasoning. Films out of Hollywood are linear. The narrative simplification of complex, morally consequential reality is always the drift of a film inspired by a book. Novels can do anything in the dark horrors of consciousness. Films do close-ups, car drive-ups, places, chases and explosions.”

Now here’s the rub for lawyers: Trial storytelling—compressed, time-limited and linear—is equally reductionist when it comes to character development. Stories told at trial are like Hollywood movie adaptations of Doctorow’s “complex, morally consequential reality.” Just like in commercial Hollywood films, the novelistic complexities of character development are subordinated to plot and to the legal theory of the case, limited by evidentiary rules and pragmatic courtroom storytelling constraints. The novelist’s exploration of fully formed “complex” characters is simply not an item available on the menu of the litigator’s narrative toolkit.

Does this mean character development is not important in trial storytelling? Of course not. Skilled trial lawyers intuitively understand the importance of character. There is a well-recognized psychological bias for jurors to regard events as caused by the innate character traits and psychological propensities of individual actors rather than by circumstances beyond human control.

Social psychologists label this heuristic the “fundamental attribution error” because it is “fundamental” to our understanding of how the world works to “attribute” events to causality issuing from an actor’s unitary character, even though it may be “error” to do so. This psychological shortcut is exaggerated in law, with its twin mantras of free will and individual responsibility. Because character evidence is so persuasive that it can readily become a surrogate for a more careful examination of evidence, there are evidentiary rules against propensity inferences. But, as trial lawyers well know, there are many ways to introduce character at trial that are consistent with evidentiary prohibitions. As F. Scott Fitzgerald observed, “action is character,” and character that arises from a relevant plot—as character always does—does not fall within any prohibition.

Bottom line: To construct the plots of trial stories, litigators depict compelling characters and do so under constraints akin to those of commercial Hollywood movies. They employ calculated shorthand forms, whittle down essential traits, eliminate complexity and ambiguity, and encourage jurors to draw crucial inferences about character from scripted testimony, courtroom imagery and theatrical performances. Trial lawyers who are best at this think as movie directors do about the characterological implications (the character “subtext”) of everything that is offered as evidence or in argument.

DANGERS OF MISREADING CHARACTER ON APPEAL

So far, I have been talking about juries and trial judges as the intended audiences for the trial’s movie. There is, however, another one: the appellate bench. There is a unique risk for appellate judges in regard to character, illustrated by the following case:

In Rusk v. State, a 1979 case included in many criminal law casebooks, the Maryland Court of Special Appeals overturned Salvatore Rusk’s conviction for rape. Determining that there was insufficient evidence to convict Rusk of rape, the majority makes implicit assumptions about the character of the unseen victim based upon a curious selection and depiction of evidentiary details cherry-picked from the record. The “prosecutrix” is described as “a 21-year-old mother of a 2-year-old boy … separated but not yet divorced,” who after a high school reunion goes “bar hopping” in Baltimore.

At a bar she meets appellant Rusk and, after a “five- or 10-minute conversation,” gives him a ride to his apartment in a shady section of town. Rusk takes the keys from the victim’s ignition, dangles them before her and then departs; the victim is compelled to follow him upstairs to his apartment.

The court further selects evidentiary details presenting its version of what transpires in the apartment: When the defendant goes to the bathroom, the victim makes no attempt to leave; she doesn’t even notice the phone. When Rusk returns, he sits on the edge of the bed and pulls the victim from a chair onto the bed, removing her blouse despite her protestations. But afterward she takes off her own slacks and clothing simply because “he asked her to do it.”

Excerpts from the victim’s own testimony undercut the court’s intimations of the victim’s motivations and character derived from these actions:

The court’s reading of the record discounts the victim’s explanation of why she did not physically resist the defendant: Rusk’s “lightly choking” the victim and “the look in his eyes” are legally insufficient evidence to prove either the use of force or the “threat of force to create a reasonable fear which overcame [the victim’s] ability to resist” the defendant, necessary for conviction of rape under Maryland law.

Judge Alan M. Wilner’s dissent deconstructs the majority’s assumptions about the victim’s motivations, actions, physicality and character: “We know nothing about [the victim] and appellant. We don’t know how big they are, what they look like, what their life experiences have been. We don’t know if appellant is larger or smaller than she, stronger or weaker. … The trial judge and the jury could discern some of these things, of course, because they could observe the two people in court and could listen to what they said and how they said it.”

“A judge and a jury, observing the witnesses and hearing their testimony, concluded without dissent that there was sufficient evidence to find beyond a reasonable doubt that appellant had sexual intercourse with [the victim] by force or threat of force against her will and without her consent; in other words, that the extent of her resistance and the reasons for her failure to resist further were reasonable. No claim here is made that the jury was misinstructed on the law of rape. Yet the majority of this court, without the ability to see and hear the witnesses, has simply concluded that, in their judgment, [the victim’s] fear was not a reasonable one, or that there was no fear at all. … Brushing all of this aside, they have countermanded the judgment of the trial court and jury and declared [the victim] to have been, in effect, an adulteress.”

The majority, whose decision was reversed and the rape conviction later affirmed, knew they had not seen the movie, so instead they read the transcript as if it was a novel and were free as readers to imagine the unseen world within. But there was no novel; it was a trial.

This article originally appeared in the August 2015 issue of the ABA Journal with this headline: “Complexities of Character: How trials are more like plot-driven movies than character-driven novels.”