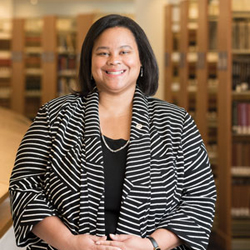 In the race for first-year, big money BigLaw jobs, some schools can place graduates based solely on the school's academic reputation; others must find a way to stand out from the crowd.

Howard University School of Law has managed to take a seat at the table through a long history of relationship building and alumni advocacy.

The historically black school says its placement rates average 21 to 25 percent for law firms with more than 100 lawyers. Howard Law placed 45th on the 2014 National Law Journal “Top 50 Go-To” list, climbed to No. 22 on the 2015 list, and fell back to a respectable 37th for the 2016 list. The list ranks the top 50 schools by the percentage of JDs who accept first-year associate positions at the 250 largest firms.

“We’re a very old law school,” dean Danielle Holley-Walker says about Howard Law, which was founded in 1869. “A lot of the big law firms began recruiting in the 1970s, so now you’re talking about a decades-old relationship. Some firms, you have a whole network or legion of Howard lawyers coming behind some of the originals.

“When you place one or two people [and] they do great work, they bring in others,” Holley-Walker explains, “and they support each other once they get there.

Of course, simply attending the school won’t ensure a job at a major law firm, and observers note that the big-firm recruiters are targeting the same small pool of students at the top of the class with credentials such as law review and moot court. Others wonder what firms are doing to support minority candidates after they’ve been recruited. Nonetheless, Howard Law has opened a door of opportunity for a diverse pool of candidates.

Howard “gives you the confidence that you can go out and compete with anyone, whether they went to Harvard, Stanford, U of C— wherever,” says alum and D.C.-based Venable partner Claude Bailey. “I believe they prepare you to go out in the world—if you want to take advantage of the opportunities they present while you’re in school. People tell you you’re just as good, and you get the opportunity to participate in things you might not if you were at a majority school.”

Bailey has recruited Howard grads to Venable, and he also gives talks about what life is like at a major law firm. After more than 30 years in public and private sector law, Bailey is committed to sharing his experience with students on his frequent trips back to campus.

“I think they need to know what the expectations are when you become an associate,” says Bailey, who also serves on the dean’s advisory board. “The informal do’s and don’ts and, quite frankly, what it’s like being an African-American in a predominantly white environment. Those are the kinds of things I like to talk to them about. And the importance of the quality of your work.

An entrenched pipeline with alumni actively involved in recruitment and mentoring has been a source for strong candidates over the decades. Partners Dennis Ellis from Paul Hastings in Los Angeles, William Snipes at Sullivan & Cromwell in New York City and Scott Bolden with Reed Smith in Washington are just a few of the influential alumni actively involved in recruiting at Howard Law.

Holley-Walker says the school’s placement rates are the result of an effort over generations to build relationships with law firms and to produce excellent corporate lawyers. This means new associates can tap into the broader Howard Law diaspora across the country for support, no matter what city they might be in.

“We have had a very long relationship [with the school], and I think part of that falls on the fact that Moore is a Howard alum,” says Bridget Logstrom Koci, partner and Minneapolis office co-head for Dorsey. “That has made a world of difference in recruiting when you have alumni who are very connected with their law school and you are able to find bright, hardworking people, not just through a placement office. Alums are the best spokespeople for their schools.

“Moore goes to Howard each year and creates enthusiasm for Dorsey, and we find we get a great pipeline of very talented people who want to interview with us.”

Howard grad Angela Porter, a Minneapolis-based associate, joined Dorsey in 2014 after interviewing with Moore and touring the firm. Porter understands the school’s legacy and takes pride in the sense of community that has helped build a national network of lawyers committed to being resources and role models.

“Howard grads stand out because they are part of the Howard family, which comes from a long and tight-knit tradition of academic excellence,” Porter says. “The Howard tradition recognizes the obstacles and challenges that are uniquely faced by lawyers of color, and we are expected to meet those challenges with intellect and excellence.”

This article originally appeared in the June 2016 issue of the ABA Journal with this headline: “Seat at the Table: Howard Law’s grads are getting major law firm attention.”