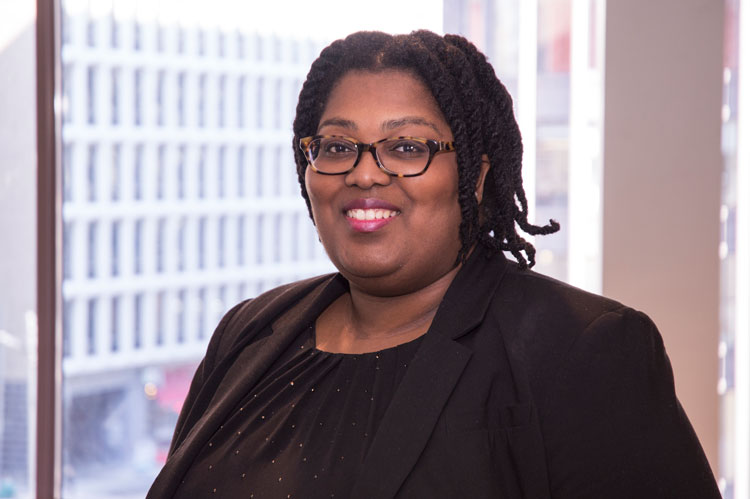 Tanisha Bowens-McCatty: “We really need attorneys that have experience in civil court, in criminal court or experience sort of walking through complex matters.” Photo courtesy of ABA Media Services.

Another thing advocates would like is more reassurance that victims who report immigration law fraud won’t be deported—a realistic concern and one that keeps immigrants from coming forward.

This wouldn’t have to come from the federal government; local and state government agencies take more complaints than federal authorities. Schaufele says there’s a Department of Homeland Security memo on this subject, but ICE won’t assure her—or the various elected officials who have asked—that it still applies.

Just giving that assurance could help, she says.

Mackler suggests that the New York state government could help by tweaking state law to allow victims of unauthorized practice of immigration law to claim a U visa, granted to immigrant victims of crime, but it isn’t granted for fraud alone.

Those who’ve received it after falling victim to immigration legal-services fraud typically were also victims of crimes such as witness tampering or extortion. Broader state statutes could open the door to more U visa claims, giving immigrants a better incentive to come forward.

Another change some advocates would like to see is a preventive one: getting rid of state “immigration consultant” statutes, which permit nonlawyers to do a limited amount of immigration law work. Sharp explains that California’s statute dates to the late-1980s federal amnesty program, when far more applications were expected than there were lawyers available to help. The state authorized nonlawyers to help fill out the paperwork.

But those applications were simple, Sharp says, and expressly guaranteed that those who were rejected wouldn’t be put into deportation. Modern immigration law is much more complicated, he says, and comes with no such guarantee.

Now, he says, the main effect of state immigration-consultant licenses is to provide an appearance of legitimacy for fraudulent businesses.

“It’s well-intended, it’s very comprehensive, and it has been an utter failure from our perspective,” he says. “I’ve yet to encounter a scenario where someone is in compliance or could be in compliance.”

All the same, advocates say there just aren’t enough immigration attorneys to meet all the need. To address that, the federal government has created a program that certifies nonlawyers to do some of the same work. Accredited representatives must work for a recognized nonprofit and undergo substantial immigration law training, after which they can be certified by federal authorities as competent to represent immigrants. Williams says the Catholic Legal Immigration Network is actively promoting the program as a way to increase access to legal services.

Williams would also like to see more attorneys doing pro bono work—and she might get her wish. For the past decade, the ABA Commission on Immigration’s Fight Notario Fraud project has offered information and resources to attorneys, bar groups and the public about notario fraud and how to fight back. Tanisha Bowens-McCatty, associate director of the commission, runs that project and has seen an increase of interest from attorneys in helping with immigration cases. She hopes to soon start connecting those lawyers with pro bono cases.

“The problems that we see people are facing on the ground are not necessarily immigration problems,” Bowens-McCatty says. “We really need attorneys that have experience in civil court, in criminal court or experience sort of walking through complex matters.”

But for Alicia, there are few legal mechanisms to fix the problem her notario caused. U.S. Citizenship and Immigration Services announced last November that it would reconsider the cases of people who could prove their DACA renewal applications were delayed by postal errors. Schaufele said in December that she was trying to analogize Alicia’s case to those, but she wasn’t hopeful.

“It depends on the case type, but often USCIS views preparer error as victim error,” she says. “They see it as the individual who’s the applicant signed off on the application, and that signature is what’s weighed heavily against the applicant.”

But Alicia has gone ahead and filed a complaint against the notario with the Federal Trade Commission anyway.

Regardless of whether her situation can be fixed, she wants to put him out of business.

“That way, he won’t be able to do harm to other people in the future,” she says. “So that they’ll revoke his permission as a notary, so that he can’t harm other people who perhaps are also trying to submit their papers.”