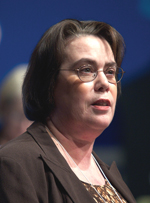 The question of how to revamp U.S. immigration policy hasn’t quite moved to the top of the agenda on Capitol Hill, but when the talk about immigration reform does get serious, the ABA plans to be part of the conversation.

Actually, the ABA already has taken steps to carve out policy positions on certain immigration issues, and the association is planning to continue working on those issues regardless of what the legislative timetable looks like in Congress.

“There was a big push for immigration reform in 2007, and it failed,” says Karen T. Grisez, public service counsel at Fried, Frank, Harris, Shriver & Jacobson in Washington, D.C., and chair of the ABA Commission on Immigration. “There have been statements by President Barack Obama and Homeland Security Secretary Janet Napolitano in the last year indicating that comprehensive immigration reform would be a high priority right after health care reform. If it’s going to come up, we should be looking at what the law, the structure and resources should be before there’s comprehensive immigration reform. We wanted to get these ideas on the table.”

At the center of current ABA policy on immigration is a series of recommendations from the Immigration Commission that were adopted by the association’s policymaking House of Delegates in February at the association’s midyear meeting in Orlando, Fla.

The key recommendation calls for Congress to create a court under Article I of the Constitution that would adjudicate immigration cases at the trial and appellate levels.

“It’s a huge recommendation,” acknowledges Grisez. “We expect that would get scrutiny and take a lot of time to accomplish. It would have a lot of startup costs, but our hope is there would be more efficiencies. Shortened detention times and fewer appeals would mean cost savings. And if you have substantively better systems so the public has better confidence in them, there are savings in ways more than dollars.”

The recommendations adopted by the House also call for adding at least 100 immigration judges right now under the current structure; giving more discretion to lawyers from the Department of Homeland Security on initiating removal cases; improving operating procedures for the Board of Immigration Appeals; and restoring the authority of the federal courts of appeal to review removal decisions made at the discretion of the attorney general.

The recommendations adopted by the House were based primarily on a report, Reforming the Immigration System (PDF), that was released in conjunction with the start of the midyear meeting. More than 50 lawyers and staff members from the law firm of Arnold & Porter spent more than a year researching and writing the report for the Immigration Commission on a pro bono basis.

“The pressures on the system have grown exponentially as the number of people trying to enter and stay in the United States has increased and as political forces and security concerns have resulted in heightened efforts to stem the flow and remove undocumented noncitizens from the country,” concludes the report.

While the release of the report and the immigration policies adopted by the House of Delegates may have made the biggest splash, the ABA has been addressing immigration issues on other fronts as well.

Also in February, the Board of Governors signaled the association’s concerns when it identified immigration as one of its top 10 legislative priorities for 2010. That action authorizes the Washington, D.C.-based Governmental Affairs Office to focus its advocacy efforts in Congress and with the executive branch on the ABA’s legislative priorities. Policy positions that the ABA will emphasize in lobbying efforts on immigration include the need for comprehensive reform, access to legal representation, and opposition to mandatory detention for certain individuals in the immigration process.

Incoming ABA President Stephen N. Zack plans to emphasize immigration policies, especially as they relate to other issues facing the growing Hispanic community in the United States. The Board of Governors already has authorized him to appoint a commission on Hispanic legal rights.

“Immigration is a problem that will not go away,” says Zack, a partner at Boies, Schiller & Flexner in Miami. “The sooner we deal with it, the more likely we’ll achieve a fair result.”

When he begins his one-year term in August, Zack will become the ABA’s first Hispanic-American president. His mother is Cuban, and he grew up in Cuba until his family fled the Castro regime in 1961. “The commission comes out of my own life experience,” Zack says. “Hispanics are the largest single minority in the country at 22 percent, and the fastest growing. I was frankly shocked to see that there’s never been an ABA commission to look at this issue.”

The impact of immigration laws on the Hispanic community and other groups will be part of the agenda for the commission, which will work closely with the ABA Center for Racial and Ethnic Diversity.

Current ABA President Carolyn B. Lamm joined the immigration debate in April when Arizona adopted a stiff new law that authorizes local police to check documentation of people they reasonably suspect of being in the U.S. illegally.

The law “runs contrary to the fundamental tenets of our Constitution relative to equal protection and due process,” said Lamm, a partner at White & Case in Washington, D.C. “It is, quite simply put, a law based on prejudice and fear—one whose purpose is to be divisive.”

Lamm urged that immigration policy be addressed on a national level. Citing the recently released ABA report, she said that “the U.S. immigration system is fundamentally broken. Indeed, the ABA is aggressively urging Congress to enact immigration reform as a top priority.”

One symptom of the immigration adjudication system’s breakdown is the sheer number of cases it is being asked to handle, according to the ABA report prepared by Arnold & Porter.

Immigration courts handle more than 280,000 cases annually, according to the report, and each of the roughly 230 immigration judges averages 1,243 cases per year—far more than the typical judge working for the Department of Veterans Affairs (729 cases in 2008) or the Social Security Administration (544 cases in 2007).

Cases languish in immigration courts an average of 443 days, according to the Transactional Records Access Clearinghouse at Syracuse, N.Y., and an average of 713 and 612 days in Los Angeles and Boston, respectively.

More than 30,000 appeals from immigration court decisions are handled annually by the BIA, and more than 10,000 of those are appealed to the U.S. Court of Appeals, according to the ABA report. Over the past five years, immigration cases have accounted for 17 percent of the circuit courts’ caseloads, but in the 2nd Circuit at New York City and the 9th Circuit at San Francisco, they have accounted for 35 to 40 percent of the caseload.

“Enforcement by the U.S. Department of Homeland Security has gone way up, and that’s a new development in the past few years,” Grisez says. “More and more cases are going into the system without any increase in immigration judges, BIA members or legal representation of noncitizens. To keep up with the workload, cases have been pushed faster and faster through the system without proficient judging. There are short or oral opinions, so circuit courts are seeing cases that aren’t amenable to review because it’s hard to figure out what the immigration judge or BIA did.”

The current heated political climate has created uncertainty about the direction of U.S. immigration policy, acknowledges Carlina Tapia-Ruano, another member of the ABA’s Immigration Commission. “My hope is that we’ll be able to persuade the American public that by not implementing any changes, we’ll continue to support a very inefficient, expensive and unjust legal system,” says Tapia-Ruano, a founding partner of Tapia-Ruano & Gunn, an immigration law firm in Chicago. “I can’t imagine how anyone would be in favor of that.”