In Defense of the Courts: Symposium Finds No Easy Way to Fund Courts

The University of Kentucky, Robinson’s alma mater, hosted the symposium in September. Photo of Memorial Hall courtesy of the university.

Evidence of the growing financial crisis looming over state courts around the country continues to roll in. But attendees at a symposium Sept. 23-24 at the University of Kentucky in Lexington hardly needed to be convinced that budget cutbacks being imposed by legislatures are creating a severe strain on state courts.

Many of them—including judges, court administrators, bar leaders, legal scholars and members of the business community—have been sounding the alarm for several months about how the work of the courts is being undermined by dwindling financial resources.

“This whole meeting is about one word: access,” said immediate-past ABA President Stephen N. Zack of Miami during one of the symposium’s panel discussions. “Without adequate funding, there is no access.”

Zack, the administrative partner at Boies, Schiller & Flexner in Miami, brought the issue to the ABA’s front burner at the start of his term in August 2010 when he appointed the Task Force on Preservation of the Justice System.

The task force has been continued by current ABA President Wm. T. (Bill) Robinson III. The symposium was held, in part, to honor Robinson, a 1971 graduate of the university’s law school.

But as Robinson emphasized in his closing remarks at the symposium, it’s not enough for the legal community alone to recognize the impact that budget cuts are having on the ability of courts to protect rights and provide a forum for individuals and businesses to resolve their disputes.

“We know the stakes, and we are united,” said Robinson, the member in charge of the Florence, Ky., office of Frost Brown Todd. “Now it’s time to go out and mobilize the forces of the public. We have the ability to persuade our neighbors to lend their voices to our cause. Getting the public behind us is essential.” 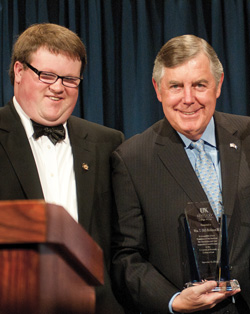 The need to build coalitions to advocate for the courts was a key element in a resolution by the justice system task force that was approved in August by the ABA House of Delegates. The policy also calls on courts and bar associations to develop effective strategies for communicating with the public and legislators on the issue, and it urges courts to develop best practices for the efficient use of court resources. In addition, the policy urges legislators to recognize “their constitutional responsibility to fund their justice systems adequately” and bring greater predictability to the budgeting process for courts.

Coalition building could be a daunting task, however, because court funding often gets tangled up with other concerns. Erwin Chemerinsky outlined the complexities in a speech that opened the meeting. The nagging economic slowdown has been bad enough for the courts, said Chemerinsky, who is dean at the University of California at Irvine School of Law. But in looking at why state legislatures are cutting funding for the courts, “I think it will be a mistake if the discussion stops there,” he said. “Another factor is politics,” said Chemerinsky, “and the judiciary isn’t a particularly powerful advocacy group.”

Since it’s difficult for members of the judiciary to lobby legislators, Chemerinsky said, the organized bar is the natural advocacy group to speak on behalf of the courts. Still, the bar is struggling to convince legislators and the public that court viability is crucial both to individual rights and the interests of the business community.

The task is not getting any easier, he said, as the number of lawyers who serve in state legislatures continues to drop. Moreover, the growing use of private justice—for instance, mediation and arbitration —allows wealthy individuals and corporations to avoid the courts.

But perhaps the most important factor is the apparent “lack of support for the political will to fund what we need in government,” said Chemerinsky. “We have to take on the larger social issue of how we convince people the government isn’t an evil, that the government provides for them.”

Chemerinsky’s speech set the tone for much of the discussion that followed during a series of panels. In one of those panels, for instance, Lisa A. Rickard, president of the Institute for Legal Reform at the U.S. Chamber of Commerce, said the chamber endorses the justice system task force’s recommendations adopted in August. 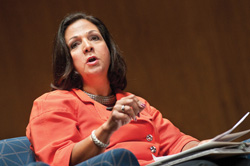 ATTICUS FINCH, WHERE ARE YOU?

“These cuts could not come at a more inopportune time,” Rickard said, as more people turn to the courts seeking remedies for problems relating to the economy, such as foreclosures, bankruptcy and domestic relations.

But Rickard said the business community also would like to see some of its concerns about the courts addressed, including discovery delays, uncertainty over liability in tort cases and third-party financing of litigation.

Such concerns make it harder to build effective coalitions for the courts, she said, especially when the legal profession hasn’t always been responsive to business community concerns. “So far, we’re still looking at ways to create dialogue on building a broader coalition,” she said.

Other speakers expressed concerns that the court funding crisis hasn’t registered with the public. Individuals and families affected by the economy may be most at risk from cutbacks from justice services.

“The silence is deafening,” said John R. Broderick Jr., who recently retired as chief justice of the New Hampshire Supreme Court to become dean and president of the University of New Hampshire School of Law in Concord. “The problem that brought us here to Lexington is not being talked about around the dinner tables of America.”

One reason for that apparent lack of concern is a general lack of awareness about the role of the courts as a branch of government, said Maureen O’Connor, chief justice of the Ohio Supreme Court. “There are no Atticus Finches in the world of evening television,” she observed.

But Broderick said the courts also may be losing credibility with younger members of the population. “Young people live in a virtual world,” he said. “We exist in a brick-and-mortar and paper world. Transparency, accountability, accessibility. Whatever technology and social media does to advance that, we should embrace it.” 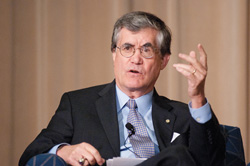 Despite these concerns, the ABA’s Robinson and Margaret H. Marshall, the recently retired chief justice of the Supreme Judicial Court of Massachusetts, both expressed hope in their speeches closing the symposium that efforts to tap into latent public support for the courts will be successful. “I believe Americans do want to wake up in a country that has a functioning court system,” Marshall said, “but they don’t realize what is at risk.”