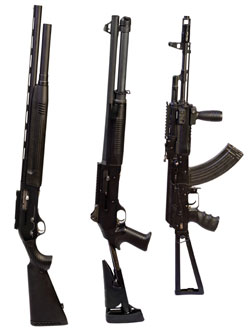 Ask Jacksonville, Fla., lawyer David Goldman who benefits from the gun trust he created, and he’s unequivocal: “Criminals are not buying guns through this route. The reason we know this is that an illegal machine gun costs $200, and no one has to know about it. A legal machine gun costs $40,000, and you have to tell the [government] where you are going to keep it. This is not the easy way to acquire a gun.”

It may not be the easy way to get a gun, but it has been an easy way for Goldman to become an authority in a legal niche.

It was Goldman who first developed the gun trust in 2007. Referred to as an NFA (National Firearms Act) firearms trust, the legal concept has quickly caught fire and now is being used by some 120 attorneys in 43 states to help clients legally purchase and possess certain types of guns, while avoiding some of the stringent identification issues associated with individual ownership.

Under current federal law, anyone trying to legally purchase, transfer or possess “Title II firearms”(which include machine guns, silencers and short-barreled rifles) first must apply for approval through their state government. The application process requires the individual to pay a tax, be fingerprinted and be photographed; it also requires approval by the chief legal officer of the jurisdiction in which the guns are purchased.

Weapons purchased through a trust, on the other hand, require no fingerprints, photographs or CLEO review, and no notice or ownership information is given to police.

Goldman’s creation seized upon that difference to create a vehicle that streamlines—some would say circumvents—the unique requirements of owning, transferring and possessing Title II firearms by registering ownership in a trust.

Goldman, who describes himself as a “serial entrepreneur,” had run a number of tech businesses before he went back to school to finish college and attend law school at the age of 40. But he wasn’t new to legal proceedings at that point in his life. “I had a 4,000-page bar application because of all the litigation,” he quips about some of his previous businesses, which included making clones of name-brand computers.

Even Goldman seems somewhat surprised by how quickly he has become a known entity in his specialty.

“I only have been out of law school for [four] years, and within two years I am known all over the country,” he says.

Goldman now licenses his gun trust expertise to other lawyers. Ohio lawyer Brian Spitz, who practices in South Euclid, says Goldman’s legal creation has helped him attract a new, different clientele for his estate planning practice. Many own five or 10 firearms; some are gun collectors with as many as 500. Some come to him for the gun trust and then become estate planning clients.

“I think the primary reason estate planning attorneys have been so interested in this,” Spitz says, “is that it is the easiest way to market themselves to high-net-worth individuals.”