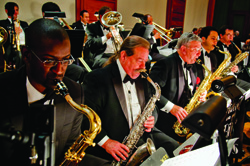 Gary Greene, Esq., and His Big Band of Barristers came all the way from LA to take the win. Photo by ©Kathy Anderson 2012.

In the glory days of the Swing Era, a big dance band might take weeks to travel from Los Angeles to Chicago, with the musicians hopscotching by bus or auto from town to town as they played a grueling schedule of one-night stands.

But that’s not the way it’s done anymore.

When Gary S. Greene brought the 17 members of his modern-day big band to Chicago for a Saturday night gig on Aug. 4, they made the trip from Los Angeles in about four hours by jet. And they didn’t linger in Chicago for very long before heading back to the Coast. After all, a lot of the band members had to meet with clients or appear in court the following week. That’s what happens when just about everyone in the group is a practicing attorney or active judge. The only nonlawyer in the band is one of the trombone players—but his wife is an attorney.

The trip turned out to be worth the effort because Gary Greene, Esq., and His Big Band of Barristers was the hands-down winner of the Battle of the Lawyer Bands sponsored by the ABA in conjunction with its 2012 annual meeting in Chicago. The band members reacted with “complete jubilation,” says Greene. “Here we came all the way from Los Angeles. It was quite a journey.” Greene maintains a solo practice in LA when he’s not directing the big band or the 85-member symphony orchestra called the Los Angeles Lawyers Philharmonic or Legal Voices, a chorus made up of more than 100 lawyers. 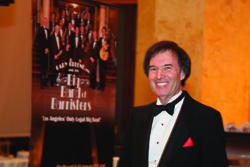 The big band’s winning performance in Chicago already is starting to pay dividends, Greene says. “Since I got back to Los Angeles, I’ve got three bar associations that want us to play,” he says. “We’re going to be in demand.” A CD might be in the works, as well.

In addition to the exposure, the band received $5,000 for finishing in first place. But as with their other gigs, the musicians won’t be pocketing any of that money. Greene said that whatever is left over after covering some of the band’s costs will go to the foundations of the Los Angeles County and Beverly Hills bar associations. The orchestra and chorus also contribute proceeds from their performances to the bar foundations.

The Battle of the Lawyer Bands was the brainchild of Wm. T. (Bill) Robinson III, whose term as ABA president ended at the close of the annual meeting. He and his wife, Joan, found in their travels for the ABA this past year “that bands at various bar association festivities often were made up of lawyers, or mostly lawyers,” says the member-in-charge of the Florence, Ky., office of Frost Brown Todd. “We thought it would be interesting to give them a chance to be chosen to play at the annual meeting.”

Robinson’s instincts were on the money. Thirty-seven bands from around the United States whose members are all, or almost all, lawyers entered the contest. Five finalists were chosen by a panel of Chicago lawyers, and samples of their performances were posted on the ABA’s website. All five were invited to perform at the President’s Reception, but one of the groups decided to take a pass. Attendees at the reception were invited to fill out ballots ranking the bands, and almost all of them selected Greene’s band as their favorite.

Treble Damages took second place in the battle of the bands. Photo by ©Kathy Anderson 2012.

Coming in second (and winning $2,500) was Treble Damages, a classic rock and blues band in Orlando, Fla., whose roots go back to a trio formed in the 1990s called the Learned Hands—perhaps the first musical group named in tribute to the famed jurist.

Treble Damages generally performs about once a month, typically at local pubs or charity events. “We have a standing Wednesday evening rehearsal, a chronic appointment on the calendar,” says lead singer David A. Jones, a partner at Holland & Knight who handles complex commercial litigation. “We all do a pretty good job of keeping that night open.”

The band that took third place (and its $1,000 prize) performs on a more ad hoc basis. Joe Bisceglia & Friends, based in Chicago, is not a standing group, says Joseph G. Bisceglia, who chairs the real estate and construction litigation practice at Jenner & Block. “I perform intermittently,” says Bisceglia, “whatever I feel like playing that I can pull off by myself or with percussion. It doesn’t interfere with my law practice. I have a very, very demanding day job that’s sometimes a day and evening job. But I do try to fit it in intermittently when I can, when I’m in the mood, when someone asks me to perform. I will jump in and out of it, depending on what’s going on in the law practice or in my life.”

The fourth band that played at the President’s Reception during the annual meeting gave its first impromptu performance at a birthday party for Robin D. Stephens, a criminal defense attorney in Ann Arbor, Mich. Stephens became the lead singer for Soultivity, a nine-piece Motown-inspired group. The group also is a tribute to collegiality—every band member is either a criminal defense attorney or a lawyer in the office of the Washtenaw County prosecutor.

Soultivity performs almost exclusively for local charities in the Ann Arbor area, says keyboardist John Reiser, an assistant prosecutor. That’s part of the reason why the local district court has accommodated the band with free rehearsal space, Reiser says, and why they have very tolerant audiences. “People cut us a little more slack if it’s just for charity,” he says. “If we were a gigging band, they might have higher expectations.”

Robinson says that during his year as ABA president, he was struck by how important music is to the lawyers who perform as a sidelight. “It appears that music fills a need for lawyers to refresh their energy and enthusiasm for the demands of the practice of law,” he says.

Participants in the ABA’s Battle of the Lawyer Bands echo that sentiment. “It does provide a wonderful balance for what I do in my law practice, that’s for sure,” says Bisceglia. “It exercises the other side of my brain. I’ve always loved music, and it’s a big part of my life.”

That feeling doesn’t come through just during performances, Greene says. “I have people come up to me after rehearsal and say, ‘Thank you, I really needed that today,’ ” he says. “The music clears the head, and even the next morning you’re still thinking about the music, and you’re ready for the coming day.”