In the Hot Zones 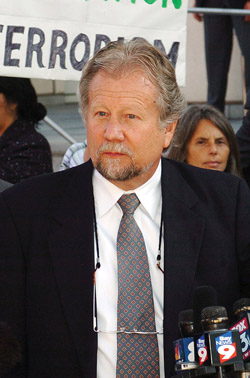 C. Peter Erlinder knew he was taking a risk when he traveled in May to take on a controversial case in Rwanda, a country in east-central Africa that still is recovering from the violence in 1994 that left hundreds of thousands of people dead and millions more in refugee camps.

Erlinder, a professor at William Mitchell College of Law in St. Paul, Minn., is intimately familiar with Rwanda’s violent recent history and its roots in centuries-old tribal conflict between the Tutsis, a minority group that traditionally held power in the country, and the Hutus, who make up some 85 percent of the population. When the Hutus took power in about 1960, it precipitated a series of civil wars as the Tutsis chafed over their loss of power.

The troubles boiled over in 1994. President Juvenal Habyarimana, a Hutu, died in April when his plane was shot down. The attackers were never identified, but many Hutus suggested it was the work of Tutsi rebels. Government troops and informal militia groups fanned out across the country in a 100-day spasm of violence that ended with the overthrow of the Hutu-led government by the Rwandan Patriotic Front, a Tutsi group that remains in power. Most of those killed were Tutsis, which prompted many human rights groups and some governments to claim that the attacks by Hutu forces amounted to genocide. (Most of those who later fled to refugee camps were Hutus.) In late 1994, the U.N. Security Council created the Inter national Criminal Tribunal for Rwanda to try individuals charged with committing genocide or other crimes against humanity during that year’s conflict. In Rwanda, it became a crime to deny that genocide had occurred.

Erlinder served as a defense lawyer for the ICTR, and in the course of representing a Rwandan military officer accused of genocide in a lengthy trial that ended in 2008, he kicked a hornet’s nest by challenging the accepted narrative of the conflict.

“I made the argument that there wasn’t a long-term conspiracy to commit genocide by the former government or military,” Erlinder says, “but there was a war initiated by the guys who won the war,” including Paul Kagame, the head of the RPF who became Rwanda’s president after the 1994 conflict and was re-elected by a landslide in early August. “By refusing a cease-fire, the guys who won were responsible for a mass killing. After seven years of trial, my client and the other architects of the so-called genocide were found not guilty of conspiracy and planning. That’s what got me into trouble.”

Erlinder says he developed his thesis after sifting through numerous U.N. documents and other materials obtained during discovery in the case, and he began advocating that position in articles. Then earlier this year, he agreed to defend Victoire Ingabire, a Hutu candidate for president who was arrested on charges of genocide denial and collaboration with Hutu rebels.

Erlinder says he made efforts to assess the prevailing political winds before entering Rwanda. “At the highest levels of the U.S. government, I’d been told there was no problem,” he says. But on May 28—the day he planned to return from Rwanda to the United States—Erlinder was arrested on charges of genocide denial.

The U.S. State Department and members of Congress called for his immediate release. The ABA was among the nongovernmental organizations urging Rwandan officials to let him go.

“The American Bar Association urges the government of Rwanda to observe the U.N. Basic Principles on the Role of Lawyers, which state that lawyers ‘shall not be identified with their clients or their clients’ causes as a result of discharging their functions’ and that ‘governments shall ensure that lawyers are able to perform all of their professional functions without hindrance, harassment or improper interference,’ ” said then-ABA President Carolyn B. Lamm in a statement issued June 2. “These principles also provide that ‘lawyers, like other citizens, are entitled to freedom of expression, belief, association and assembly.’ The ABA calls upon the government of Rwanda to abide by these principles and refrain from harassment of lawyers practicing law consistent with their professional obligations.” (Lamm is a partner at White & Case in Washington, D.C.)

On June 17, Rwandan authorities released Erlinder on bail, citing health considerations. “I was quite fortunate,” he says. “I could have been detained for a long time, and who knows what happens during a lengthy detention?”

What happens next is uncertain. Erlinder’s release was conditioned on his agreement to return to Rwanda for trial; a conviction could result in a prison sentence of 10 to 20 years. Meanwhile, Rwandan Prosecutor-General Martin Ngoga has issued statements raising questions about how he plans to pursue the case.

Erlinder plainly is not eager to go on trial. “I’m an officer of the court, I was released on bail for humanitarian reasons, and I promised I’d follow the law,” he says. “The United Nations has made clear I have immunity and shouldn’t be prosecuted. I think the law won’t require me to return, but that’s a decision I’ll leave to my lawyers.”

His case is a dramatic reminder that human rights work in volatile regions of the world can include risks—personal as well as political. But it also is at the far end of the spectrum of what American lawyers are likely to encounter on overseas human rights missions.

Many human rights organizations tend to focus their efforts on overseas programs that enjoy widespread support from government and civil society in the host country. In such cases, the greatest threat is likely to come from disease and sanitation rather than political instability or violence.

The ABA Rule of Law Initiative, for instance, works with government, the legal community and other elements of civil society to implement legal reform programs in more than 40 countries in just about every region of the world. At any given time, nearly 500 people are working on ROLI programs, including 20 to 30 expatriate lawyers working in other countries on a volunteer basis.

One example of that work is an effort in the Democratic Republic of the Congo, which shares a small border with Rwanda, to address gender-based violence. The government has given strong support to the effort, according to ABA representatives.

“More than 200,000 rapes in the last few years is the commonly accepted statistic,” says Robert H. Alsdorf, a dispute resolution practitioner in Seattle who chairs ROLI’s Africa Law Initiative Council. “We develop programs that provide counseling for victims, safety and shelter, and training for prosecutors to bring these cases. Rape wasn’t a crime that was normally prosecuted in the Congo. Now it has been, and people have been convicted.”

The most potent high-risk situations for human rights lawyers appear to be those in which conflicts between rival factions seeking power are still simmering.

“You have to be very careful, especially in places where there’s little Western involvement,” says Jordan Sekulow, director of international operations for the American Center for Law and Justice in D.C. “You’d better be educated. You‘re going to be asked direct questions about the legal system there. Do your research, not just on the cultural issues but the geopolitical issues, and know who you’re meeting with. These are places that can erupt into violence very quickly.”

David Williams, a law professor at Indiana University in Bloomington, regularly travels to Burma—he refuses to refer to the Southeast Asian country as Myanmar, the name chosen by the military government in power since 1988—to work with democratic groups seeking to unseat the regime. “I’ve been told over and over the regime won’t let me in,” says Williams, who is director of the Center for Constitutional Democracy at the law school. “So I walk across the border with insurgent groups.”

Williams downplays the risks of his undercover forays. “The biggest danger is the government will get me,” he says. “They’ve killed Burmese friends of mine. I think they’d arrest me and release me to the U.S. government within a few days, but you never know.”

David M. Crane, a professor at Syracuse University College of Law, recalls the high-risk conditions he and his 70-person staff faced when he served from 2002 to 2005 as the first chief prosecutor of the Special Court for Sierra Leone after that country’s violent civil war.

“I arrived there six months after the conflict ended,” recalls Crane, a current council member for the ABA Section of International Law. “There was the smell of death in the air, and there were vultures hov ering above us the whole three years I was there. The air was a living entity. The idea of assassinations was always under the surface. We were taking on a $400 million diamond-guns-gold-and-cash scheme that had been going on for more than 20 years. When you do that, people don’t get mad. They get even.”

Despite the dangers and discomfort, Crane says he would do it again—“in a heartbeat. It gets in your blood, literally. It’s intoxicating and an honor and a privilege. To a lawyer, helping people to see the importance of the rule of law is really fulfilling.”