In the Judgment Trade: Law Student's Website Helps Bring in the Cash 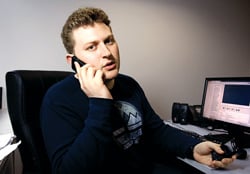 Shawn Porat isn’t your average 23-year-old law student. But then he wasn’t your average 12-year-old when he ran a successful business out of his parents’ home buying and selling items on eBay for friends and neighbors.

By 22, Porat had a half-dozen profitable business ventures under his belt, including one securing commercial loans for borrowers and a website raising awareness of and promoting penny stocks.

In March, Porat launched Judgment Marketplace, a website clearinghouse that allows people to buy, sell and trade court judgments. It’s built off the success of its sister venture, Recovery of Judgment, a judgment collection company that Porat runs with his partner, New York City-based lawyer Joseph Nierman. But Judgment Market place touts itself as the first free and secure platform that matches individuals and corporations looking to sell single judgments or portfolios of thousands.

Nearly 80 percent of judgments in the U.S. aren’t collected, according to the duo. Many are forgotten or discarded when the frustrated owner throws in the towel after collection efforts fail.

“The system is broke and nobody is out there trying to fix it,” says Porat, who delved into the judgment recovery business when his father, owner of a trucking company, promised him 50 percent of whatever amount he could garner from the hundreds of judgments the company won but couldn’t transform from paper into cash.

Porat, then an undergrad at Hofstra University, became a fixture at the courts, speaking with law clerks, searching public records and issuing subpoenas. Within months, Porat had collected on nearly 75 percent of the judgments with help from fellow students he employed by promising smaller percentages of his earnings.

Recovery of Judgment, now based in a 15-person Manhattan office, has helped more than 250 clients collect all or portions of awarded judgments valued from $1,500 to $17 million. Although the duo does not buy judgments from clients, that hasn’t stopped offers from rolling in. The company receives daily calls from prospective sellers asking for as little as 5 percent to unload judgments, which fueled the launch of Judgment Marketplace.

While the site is a vehicle for judgment holders to recoup some money on difficult-to-collect awards, Porat hopes it may also serve as a tool for potential investors to purchase large portfolios of judgments potentially worth millions for a fraction of that amount.

“We’re providing a safe environment for people who are strangers or unfamiliar with the industry to take advantage of the investment opportunities that judgments represent,” Nierman says.

For each transaction, Judgment Marketplace holds the payment until the proper documents are produced by the seller, transferred to the buyer and submitted to the court. Then the funds, minus a 5 percent processing fee, are released to the seller. The company does not advise either party as to whether they’re getting a good deal, but the duo does predict the site may eventually verify the credibility of specially screened sellers to boost the comfort level of potential buyers and ease fears of purchasing false judgments. They’ve also brainstormed the possibility of indemnifying large portfolios of judgments based on the strength of their viability—the odds of collecting a certain percentage of the judgments in a portfolio.

Although only a handful of judgments have been bought and sold so far, nearly 350 verified users are registered on the site, which also features a blog to educate readers and a judgment calculator, and Porat aims to have more than 1,000 judgments listed by this fall.