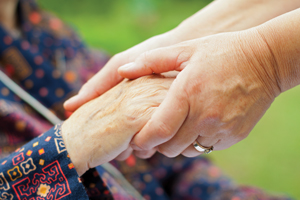 One in three seniors will die with some form of dementia, according to the Alzheimer's Association. And that fact has given rise to an increased interest in VSEDs, a form of advance directive that provides an end-of-life strategy for the devastating disease.

Short for "voluntarily stopping eating and drinking," VSEDs are considered a lawful way to hasten death in cases of terminally ill patients suffering from conditions such as Lou Gehrig's disease, also called amyotrophic lateral sclerosis, during which patients maintain cognitive function through physical decline. Now VSEDs are being drafted as humane exit plans for those with late-stage Alzheimer's, when patients may lose the ability to communicate, move and even smile, and may need help with nearly all personal care.

"People are saying: 'That's not how I want to die,' " says Alan Meisel, director of the University of Pittsburgh's Center for Bioethics and Health Law. "I don't want it agonizing for myself and my family. I'd rather do something that ends my life in a respectable fashion."

VSED requests for Alzheimer's are uncommon and untested, and they could prove problematic from both a legal and practical perspective. For example, will a family member, caretaker or nursing home staff honor a VSED when a patient is begging for a drink?

"In many states, if you ask for water later on, even if you're demented, that would constitute a revocation of your advance directive," says Thaddeus Pope, director of the Health Law Institute at Hamline University School of Law.

So far, there's no legal guidance on the issue, which can make physicians averse to getting involved. And medical supervision is critical to ensuring a VSED patient doesn't suffer.

Alzheimer's has risen to the forefront of popular culture with the help of the critically acclaimed movie Still Alice and with the spread of dementia diagnoses. With 5 million Americans now living with the disease, VSEDs will likely play an increasing role in advance directive plans. But because of their novelty, Pope says a dementia VSED should carefully detail an individual's wishes, preferably with video documentation.

This article originally appeared in the June 2015 issue of the ABA Journal with this headline: “Directing Death: With increased awareness of Alzheimer's disease comes a new push to use an old advance directive.”