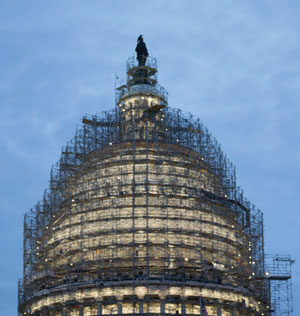 Despite the intense partisanship that has bogged down much of the legislative business on Capitol Hill these days, the ABA achieved some notable successes in its advocacy efforts during 2015.

At the top of the list is an increase in the allocation approved by Congress for the Legal Services Corp., the primary source of funding for civil legal assistance to low-income Americans through grants to 134 programs in every state, the District of Columbia and Puerto Rico. The LSC will receive $385 million in federal funding under the omnibus appropriations package that Congress approved for fiscal year 2016, which began Oct. 1, 2015. That amount reflects a $10 million increase in funding over what the LSC received in fiscal 2015.

ABA President Paulette Brown, a partner at Locke Lord in Morristown, New Jersey, said in a December statement that “this appropriation is most welcome at a time when the population eligible for LSC-funded assistance has grown to an all-time high.”

Other ABA priorities that will receive increased funding from Congress this year include the federal judiciary, which will receive $6.78 billion, an increase of $80.4 million over 2015; grants awarded under the Violence Against Women Act, which are increasing by $50 million to $480 million, including $45 million for civil legal assistance; immigration courts, which will add 55 judge teams supported by a $76 million increase to $427 million; and elder justice and adult protective services, for which funding doubled from $4 million to $8 million.

The omnibus appropriations legislation that passed as the first session of the 114th Congress came to a close also included the Cybersecurity Act of 2015, which creates a voluntary cybersecurity information-sharing process between private companies and the federal government; provides liability protection for companies that share cyberthreat data with the government; and requires the departments of Homeland Security, Defense and Justice, along with the director of national intelligence, to develop procedures for sharing cyberthreat information with other government entities that may be affected by cyberattacks.

The ABA emphasized to Congress that robust information sharing and collaboration are needed between government agencies and private industry to manage global cybersecurity risks.

Other actions by Congress and federal regulatory agencies during the past year also reflect the ABA’s priorities and advocacy efforts.

Reauthorization of the Terrorism Risk Insurance Act requires commercial property and casualty insurers to offer terrorism coverage in the policies they are selling.

The Every Student Achieves Act of 2015 includes ABA-supported steps to promote school stability and success for homeless and foster children.

On the regulatory front, the Centers for Medicare & Medicaid Services authorized, for the first time, reimbursement to health care professionals who provide advance care-planning services.

A new rule issued by the Department of Labor prohibits federal contractors from retaliating against employees who ask about or share salary information. The ABA submitted comments emphasizing that the new rule is critical to advancing pay equity in the workforce.

In the criminal justice area, the Federal Communications Commission responded to calls from the ABA and numerous other groups by issuing a rule setting caps on rates and fees charged to inmates for making telephone calls from prisons and jails.

At the end of the first session, an agreement was reached in the Senate not to return to the president 31 pending judicial nominations, and plans were made to vote on one circuit court nominee and four district court nominees early in the second session. Brown had urged Senate leaders to act before the first session ended on the 15 nominees whose confirmations had been delayed despite unanimous approval by the Judiciary Committee. “We know from the daily experience of our more than 400,000 members that vacancies must be filled promptly so that courts have the resources to deliver timely, impartial justice,” she said.

This article originally appeared in the March 2016 issue of the ABA Journal with this headline: “Hard-Won Victories: Increased funding for the LSC tops the list of the ABA’s 2015 successes on Capitol Hill.”

Next:
Courts must decide whether new high-tech toys can also be targets