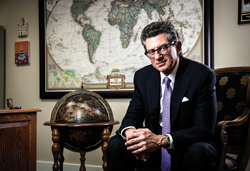 The story of Florida's anti-Shariah law movement began three years ago with a courtroom bang, but it ended last May in a legislative whimper.


It started when a state judge ruled in March 2011 that a dispute between the Islamic Education Center of Tampa and its ousted trustees should be resolved among the parties "under ecclesiastical Islamic law, pursuant to the Quran." The two sides were sparring over control of a $2.2 million eminent domain award after some of the center's land was used in a road project. Circuit Judge Richard Nielsen found in Mansour v. Islamic Education Center of Tampa that the parties, all Muslims, had previously referred their dispute to a religious arbitrator, who ruled in favor of the trustees.

The judge's deference to Islamic law drew a swift, vehement reaction from bloggers and activists already wrung out about the threat of Shariah law in the United States. Based on the Quran and other Islamic teachings, Shariah undergirds or influences the systems of many predominantly Muslim countries in the Mideast, Africa and Asia.

"Florida judge orders Muslims to follow Shariah law, against their will," announced the Creeping Sharia blog. The website Right Speak accused Nielsen of "knowingly violat[ing] our separation of church and state, thus giving legitimacy to Shariah as a way to settle civil disputes between Muslims."

Attorney and anti-Shariah activist David Yerushalmi cited Mansour in Shariah Law and American Courts, a survey of 50 court rulings in 23 states, which concluded that "Shariah law has entered into state court decisions, in conflict with the Constitution and state public policy." Yerushalmi of Chandler, Arizona, drafted the American Laws for American Courts model legislation to counter this trend. Known as ALAC, the measure does not single out Shariah, but bars courts from applying "any law, legal code or system" that does not grant affected parties "the same fundamental liberties, rights and privileges" under U.S. and state constitutions.

ALAC bills have been introduced in several states, and versions are on the books in Arizona, Kansas, Lou-isiana, Oklahoma and Tennessee. Florida looked likely to join the list. Anti-Shariah advocates, encouraged by reactions to Mansour, lobbied for an ALAC bill, which was introduced by Republican legislators. By spring, the bill was poised for legislative passage and signature by Gov. Rick Scott.

"On a pure sound-bite basis," Palmer says, restricting foreign laws "can seem persuasive and logical and appropriate." But existing legal doctrines already prohibit application of foreign laws that would violate federal or state constitutions, he says. "There has not been a case in the history of Florida where a foreign law was applied to limit fundamental rights."

With passage of ALAC looming, the Florida Bar's International Law Section proposed a last-minute compromise to state legislators. The new bill limited Shariah to family law and codified existing case law barring "unjust and unreasonable" foreign laws. With the support of moderate Republicans, and consent of the original bill's sponsors, the legislature approved the compromise language. Gov. Scott signed the bill into law May 12.

Markus Wagner, an international law professor at the University of Miami, agrees that the original Florida bill represented a "solution in search of a problem." Under well-settled case law, Florida courts do not apply laws of other states or nations that violate state public policy. In applying Shariah-based or other foreign laws, Wagner says, "the results that we don't want can be staved off by the public policy exception."

According to Palmer, uncertainties about a ban on foreign laws limiting "fundamental" rights would pose an "enormous problem" in international disputes. "Because even well-developed Western democracies protect rights in different ways, [ALAC] could have effectively crippled, or at the very least greatly complicated, the ability of Florida courts to apply foreign law," says Palmer.

Their concerns echo those of international law practitioners and professors nationwide. In August 2011, the American Bar Association's House of Delegates approved a resolution, proposed by its Section of International Law, opposing "blanket prohibitions" on "foreign or international law" or "the entire body of law or doctrine of a particular religion." The section's report warned that broad restrictions on foreign laws could have "an unanticipated and widespread negative impact on business" by placing U.S. companies at a disadvantage with international competitors.

Glenn Hendrix of Atlanta, a past chair of the ABA section, worries about "unintended consequences" of overbroad restrictions on international law, including ALAC. For example, many state constitutions guarantee the right to a jury trial in civil cases, but most nations do not have jury systems. Is the civil jury right so fundamental, Hendrix wonders, that an American court could not enforce a German judgment against a U.S. tourist found liable for a hit-and-run in Berlin?

In one state, a prohibition on Shariah law was ruled unconstitutional. In November 2010, more than 70 percent of Oklahoma voters approved a proposed constitutional amendment to prohibit state judges from applying "the legal precepts of other nations or cultures," and specifically prohibiting "international law or Shariah law."

Days after winning at the ballot box, Oklahoma's anti-Shariah referendum lost in the courthouse. Ruling in a lawsuit filed by Muneer Awad, an Oklahoma City Muslim man, the federal district court enjoined the state from certifying the election results. U.S. District Judge Vicki Miles-LaGrange ruled that banning the laws of one religion violated the First Amendment.

In January 2012, the 10th U.S. Circuit Court of Appeals at Denver affirmed the injunction, noting that the state could not identify "even a single instance" when Oklahoma courts have used "the legal precepts of other nations or cultures."

Proponents of Oklahoma's anti-Shariah initiative did not admit defeat; they simply changed tactics and text. In April 2013, Gov. Mary Fallin signed a new law based on ALAC. State Rep. Sally Kern, the bill's main sponsor, says the legislation "assures Oklahoma citizens' rights will be constitutionally protected," and it has not been challenged in court.

ALAC attorney Yerushalmi says that, unlike the language in Oklahoma's ill-fated referendum, his model legislation is "constitutionally sound" and impervious to legal attack.

Yerushalmi notes that his efforts are promoting discussion, in Florida and elsewhere, about the dangers of "transnationalism" in American law. Even when it doesn't pass, he says, the model legislation "allows for a reasoned and open debate."

This article originally appeared in the January 2015 issue of the ABA Journal with this headline: "Shepherding Shariah: International law bar takes aim at overbroad bans on Islamic law."