Into the Breach: Voluntary Compliance on Money Laundering Gets a Boost from the ABA and Treasury

By Michael A. Lindenberger

It was early April 2006, and attorney Scott D. McCreary had an uneasy feeling about the $38.5 million sitting in his firm’s escrow account awaiting transfer to the seller of a long-range Gulfstream G-V jet. McCreary, who leads the aviation practice group for McAfee & Taft in Oklahoma City, knew that the owner of the firm seeking to buy the jet was Teodoro Obiang, the son of the dictator who has ruled the small west African state of Equatorial Guinea for more than three decades, and he wanted to know more about the source of that money.

McCreary sent an email to Obiang’s agents stating that the firm would return the money unless they could satisfy his misgivings. The documentation he requested was never delivered, and back went the money—all $38.5 million of it.

Obiang, the subject of a U.S. Department of Justice investigation for corruption that includes illegally passing more than $100 million of his country’s wealth into the United States, found another escrow agent to handle the transaction, and within two weeks the plane was his.

Nevertheless, McAfee’s handling of the matter, despite the lack of any mandatory requirements governing his actions, was hailed as model behavior four years later during a U.S. Senate hearing focusing on how actions—or inactions—by lawyers and other professionals can facilitate illegal money-laundering efforts by international criminals and terrorists. Indeed, the aborted jet deal was exactly the kind of big-dollar transaction by high-risk foreign nationals that the Justice Department, and Congress, want lawyers to do more to prevent in the future.

At the hearing in February 2010, Sen. Carl Levin, D-Mich., expressed concerns about the role of lawyers and other nonfinancial gatekeepers. “Those engaged in large-scale corruption want access to U.S. banks, and it is our job to stop them, to keep foreign corruption out of the United States,” Levin said. “It is not an easy job. With the help of U.S. lawyers, real estate and escrow agents, lobbyists and others, politically powerful foreign officials—and those close to them—have found ways to use the U.S. financial system to protect and enhance their ill-gotten gains.”

There is widespread support in government, legal organizations, other gatekeeper professions and the financial industry for efforts to prevent money laundering by criminal and terrorist groups. In August 2010, for instance, the ABA’s policymaking House of Delegates adopted a recommendation stating in part that the association “acknowledges and supports the United States government’s efforts to combat money laundering and terrorist financing.”

The question for the ABA and other bar groups is whether they can encourage lawyers to carry out enough voluntary diligence regarding money laundering by clients to satisfy policymakers, or whether pressure to impose government rules that have been implemented in some other nations will become reality in the U.S. as well.

Although Levin and some other members of Congress have favored mandatory anti-money-laundering rules for lawyers, there appears to be a general willingness, for now, to give voluntary efforts a chance to work. 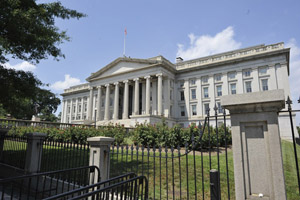 The ABA House of Delegates endorsed the voluntary approach in its policy action in August 2010, which adopted recommendations developed by the Task Force on Gatekeeper Regulation and the Profession in collaboration with several ABA sections and specialty bar associations.

The policy supports a “risk-based” approach grounded in the premise that limited resources available to combat money laundering and terrorist financing “should be employed and allocated in the most efficient manner possible so that the sources of the greatest risks receive the most attention,” states the report supporting the task force’s recommendation to the House.

The risk-based approach is in accord with guidelines developed by the Financial Action Task Force on Money Laundering created by the U.S. and other leading industrialized nations. The FATF issued an action plan for combating money laundering, known as the 40 Recommendations. After the 9/11 terrorist attacks, the FATF issued nine special recommendations for dealing with terrorist financing. The combined 40 + 9 Recommendations are considered the international standard for anti-money-laundering efforts. In 2008, the FATF adopted a Lawyer Guidance to provide a broad framework for implementing its recommendations. (Similar guidelines have been published separately for other gatekeeper professions.)

The goal of the Good Practices Guidance “is to assist members of the legal profession in the United States in designing and implementing effective risk-based approaches consistent with the broad contours of the Lawyer Guidance,” states the 2010 report by the gatekeeper task force to the House of Delegates.

But the report also states that a key purpose of the Good Practices Guidance is to encourage voluntary actions by lawyers against money laundering, “thereby negating the need for federal regulation of the legal profession.”

The idea of mandatory due diligence, and especially that of reporting on clients without their knowledge, has met significant resistance from the U.S. legal profession, which is worried about the impact on attorney-client privilege and client confidentiality.

The Good Practices Guidance represents a serious effort by the ABA to encourage lawyers to do more to prevent money laundering, says Kevin L. Shepherd of Baltimore, who chairs the gatekeeper task force. “We are working with the U.S. Treasury and believe this is a sensible approach to this issue of combating terrorism financing and money laundering,” says Shepherd, who co-chairs the real estate practice group at the Venable law firm. “Lawyers already perform some level of client due diligence, such as the client’s ability to pay and whether conflicts exist, so this is an extension of the client intake review process.”

The new guidance urges lawyers to assess the money-laundering risk from three vantage points: the nature of the client, the nature of the legal work involved, and where the business is taking place. “That will be a change to be sure,” Shepherd says, “but it’s a practical step given the possible unattractive alternative of federal law imposing mandatory anti-money-laundering obligations on the legal profession.”

The Treasury Department has encouraged ABA efforts in the area. “In the course of facilitating a range of legitimate commercial transactions for their clients, legal professionals may be at risk of facilitating serious crimes, including the money-laundering activities of illicit actors who seek to exploit such services,” says Daniel L. Glaser, the assistant secretary for terrorist financing in Treasury’s Office of Terrorism and Financial Intelligence. “We welcome the American Bar Association’s recognition of this threat and the need for greater action to protect the legal profession from this threat as part of our broader efforts to protect the financial system from abuse. We look forward to continuing our cooperative efforts with the legal profession to address this ongoing challenge.”

The Treasury Department and the ABA also are working together to boost the legal profession’s awareness of how lawyers can sometimes become involved in international financial crimes and developing educational programs to help them recognize and deal with those situations.

In April, then-ABA President Stephen N. Zack of Miami sent a letter (PDF) to other bar presidents asking them to urge their members to follow the ABA’s Good Practices Guidance. He said those measures are “the most effective means of both combating money laundering and avoiding the passage of federal legislation or adoption of rules that would impose unnecessary, costly and burdensome new regulations on lawyers and the legal profession, and adversely affect the clients that we serve.”

Without a strong voluntary commitment, mandatory government measures still could come into play, caution experts in the field.

“Where I am with this is that it’s reality, so we have to deal with it,” says Laurel S. Terry, a law professor at Pennsylvania State University. “The profession really has a stake in wholesale embracing of the voluntary guidelines.” Otherwise, she says, “the government could decide to intervene and do something more drastic.”