Is video visitation helpful or harmful for prisoners and their families? 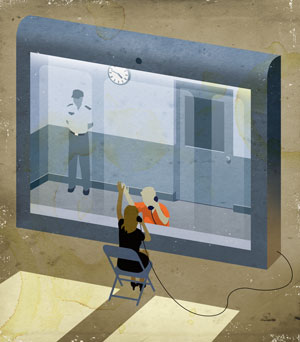 Prison can be a lonely place. Few of the estimated 2.2 million Americans behind bars get regular visitors due to cost, distance and the stress of prison visits. But that may soon change thanks to new video visitation technology akin to Skype or FaceTime that has already been introduced into some 500 penal institutions across the country.

But critics say the technology may do more harm than good.

The video calls—typically priced at $20 for a 20-minute call—may be prohibitively expensive, particularly for families that are likely to already be living in poverty. And unlike high-end technology like Skype or FaceTime, the prison video technology frequently freezes and often has poor resolution and audio sync, according to the Prison Policy Initiative.

Opponents also worry that video visitation will become the standard, supplanting in-person visits. In tandem with contracts made with prison video companies, some jails have eliminated in-person visits, which risks disconnecting inmates from society even more.

But there are benefits. The technology enables contact with inmates for those too far, too sick or too intimidated to visit in person. It also can reduce costs because fewer guards are needed to monitor on-site computers and because it provides additional revenue. And the visual component provides a more meaningful visitation experience than standard phone calls.

Kevin Wright, a professor who studies correctional policy at Arizona State University’s School of Criminology and Criminal Justice, rejects all-or-nothing arguments about video visitation. “It could be a good thing if we think about it in critical ways and if we use it innovatively,” he says.

The video chats could be recorded and then used to help counsel an inmate on interpersonal skills. Also, because a huge number of inmates are eventually released without any supervision whatsoever, Wright says, “video visitation is an opportunity for prisoners to connect with friends and family to discuss their plans, review where they’ll stay.”

This article originally appeared in the October 2015 issue of the ABA Journal with this headline: “Virtually There: Technology may help bring family and friends to visit more often.”

Due to a reporting error, print and initial online versions of “Virtually There,” October, incorrectly stated that Global Tel-Link and Securus Technologies require jails to eliminate in-person visits as a condition of using their virtual visitation services. A Global Tel-Link representative says the company has no such policy. A Securus rep says that it does not mandate video visitation only, and that clients have the authority to decide whether face-to-face visits are also allowed.