It's a Gift: Evasive Witnesses Are Doing You a Favor if You Know to Take Advantage 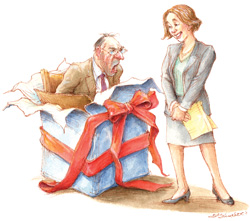 Barbara Swanson was fuming. “Is it justifiable homicide if I strangle an evasive witness in the middle of cross-examination?” she said.

“Try 100 percent serious,” said Barbara. “This design engineer I’m cross-examining is the most obnoxious, argumentative, evasive witness I’ve ever seen. He refuses to admit the most basic points that no reasonable design engineer would ever disagree with. And Judge Feckler is letting him get away with it.

“The result is a total mishmash. A string of questions made incomprehensible by evasion, a disjointed series of nonanswers, my attempts at witness control, his outrageous arguments, my objections and the judge’s dumb rulings.

“And the worst part is, I get the feeling that the jury is taking the side of the witness.”

Angus looked at Barbara. “I know how you feel,” he said. “What you’re going through has happened to every real trial lawyer I know. And it’s no fun.

“But a difficult witness like that actually is a gift. After you learn how to handle him, almost every evasive, argumentative witness the other side throws at you is an opportunity to make your case stronger than it was before.”

I started taking notes right away. Here they are:

To begin with, why are you cross-examining the witness in the first place?

The point of cross is to let you—the lawyer—tell your side of the case so the witness has to agree that what you say is true.

The rules are designed to let you do it. You get to ask leading questions. You get to pick and choose what you want to talk about. And you get to do it in whatever order you want. For practical purposes, you are the witness when you conduct cross-examination—just as you are the witness during jury voir dire, your opening statement and final arguments.

And since you are the real witness, your credibility is the key. Can the judge and jury trust what you say? Rely on your witnesses? Believe in your arguments? Think of you as the guide they can trust to lead them through the thicket of facts and law?

The answers to those questions had better be yes, or your case is in trouble.

One of the major components of your credibility is how you conduct cross-examinations.

Ask your questions the right way—using short, simple statements of fact—and they invite no comment from the witness other than yes or no. Besides good witness control, you’re eliminating verbal clutter. You want what you say to be the clearest, most sensible “testimony” in the entire trial.

But when the serpent of evasion slithers into your Eden, tying your testimony into knots, you are offended. You take it personally. Which sets up the kind of disaster that Barbara Swanson experienced.

When you take evasion personally, you lose an opportunity to show the judge and jury that you are a better source of information. You lose your cool. Your self-control gets frayed. You argue with the witness. Mongo—your inner beast, always lurking—takes over and makes everything the witness says seem justified. Your testimony is forgotten in your quest to destroy the witness, and no one takes your side.

How do you keep that from happening? It helps to look at why witnesses become evasive.

First, most witnesses identify with the party that calls them to the stand.

Second, when they testify on direct examination, witnesses are the source of information. They are giving answers to open-ended questions. It’s hard to suddenly stop doing that on cross.

Third, witnesses fear cross, certain that lawyers are schooled in the dark arts of twisting words and taking unfair advantage of verbal slips.

So expect evasion. It’s a normal response to the stress of cross-examination. But instead of taking offense, take advantage of what the witness does so it validates you as a credible source of information.

Wait a minute, you say. Can I really do that?

Absolutely. See how it works in response to some different kinds of evasion.

The vague, indefinite answer is probably the most common form of evasion—and one that does a lot of damage by turning your crisp, clear words into a sodden lump of guesses and approximations:

Q: You worked for the McKittrick Manufacturing Co.?

A: You could say that. For a time, anyway.

Q: As a regional sales manager?

A: I suppose that’s as good a description as any other.

A: That’s approximately correct. Somewhere in that neighborhood.

As soon as the witness starts getting indefinite, it’s a great opportunity to show that you know what you’re talking about. With a smile on your face, and in your voice, you say:

Q: Excuse me, Mr. Wilkins, but you seem a little indefinite about this. Take a look at what you said in your letter to the plaintiff: “I worked for the McKittrick Manufacturing Co. for seven years as a regional sales manager.” Is that what it says?

An impeachment? Not at all. But between you and the witness, who is the more reliable source?

Then later you ask:

Q: During that time, Mr. McKittrick had a total of 57 different private secretaries?

A: I’m not sure. It probably was something in that area.

That’s when you say:

Q: I don’t want you to guess, Mr. Wilkins. Here, take a look at your sworn testimony from last November.

After two or three such episodes, the witness may seem to surrender, saying, “Well, if you say so.”

That answer is a kind of evasion, too. Instead of just accepting it, say:

Q: Not if I say so, Mr. Wilkins, but if that’s what actually happened.

A: Yes, that’s what happened.

The next level of evasion is to not respond to your question. Then you can gently prod the witness with one word—true.

Q: You were eventually asked to leave the McKittrick Manufacturing Co.?

Notice the linguistic power of that exchange. The witness is agreeing that what you say is true. But don’t wear out the word true. Mix in yes or right every now and then.

SAY IT WITH A SMILE

The next level is when the witness “forgets” the answer. You already know this is a chance to show the witness—and everybody else—that you have the answer in the deposition or the document you’re going to show—and read to—the witness.

Then there’s the nonresponsive answer, which usually is argumentative. That’s when Mongo taps you on the shoulder and offers to kill the witness. Tell Mongo to sit back and watch. You’re going to have some fun.

The cure is to show the judge and jury just how argumentative the witness has been without joining in the argument yourself.

Suppose you ask whether the witness did a particular calculation. And instead of a simple yes or no, the witness gives you a long harangue about why that calculation wouldn’t be useful.

If you ask the judge to tell the witness to answer the question, the jury will be puzzled. After all, you asked about the calculation, and the witness told you a lot about it. Just let the jury see that the witness was dodging the real question. The first time it happens, you can even apologize:

Q: I’m sorry, Dr. Laskey. I meant to ask you whether you had actually done this calculation. Did you?

The next time it happens, you can say:

Q: Pardon me, Dr. Laskey. Does that mean you did not ask your client to verify those figures?

And if the witness is silly enough to try it again, you can say:

Q: Doctor, is there some reason you don’t want to tell the jury what the results were?

The ABA Journal is occasionally reprinting some of Jim McElhaney’s most popular columns from past years. This article originally appeared in the Journal’s October 1997 issue under the headline “Evasive Witnesses.”