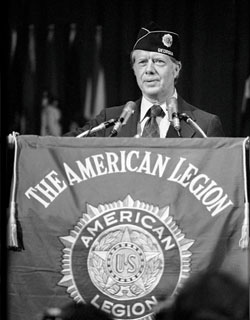 On Sept. 8, 1974, barely a month into his happenstance presidency, Gerald Ford granted a full and unconditional pardon to his disgraced predecessor, Richard Nixon. Ford reasoned that a criminal trial would cause “prolonged and divisive debate over the propriety of exposing [Nixon] to further punishment and degradation.” In a nation still tumbled by the wake of Watergate and the Vietnam War, Ford’s exercise of presidential clemency received a polarized reception, one that would haunt the duration of his term.

Eight days later, Ford expanded the breadth of his campaign of national conciliation by announcing a program to redress criminal penalties levied against thousands of youths who had evaded or refused conscription during the highly unpopular war. For those not yet convicted or punished, he offered amnesty in exchange for 24 months of “alternative service.” For those convicted, even of desertion, he established a board to review their cases to ensure “the government’s forgiveness” wherever it could.

During the 1976 presidential campaign, candidate Jimmy Carter pledged a less piecemeal approach. A graduate of the U.S. Naval Academy, Carter said he believed that “reconciliation calls for an act of mercy to bind the nation’s wounds and to heal the scars of divisiveness.”

On the first full day of his presidency, Carter issued Executive Order 11967, which pardoned Vietnam-era draft evaders, whether or not they had been convicted. Carter’s amnesty—though he avoided the term—excluded deserters, those who had committed violence during their protests and those who had received less-than-honorable discharges.

Like Ford, Carter received a mixed response. The left accused him of favoring white, middle-class draft evaders over poorer deserters who had been conscripted. Many supporters of the war, like Arizona Sen. Barry Goldwater, never forgave what he called “the most disgraceful thing that a president has ever done.”