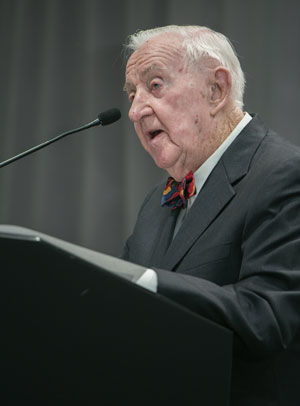 In 2014, retired U.S. Supreme Court Justice John Paul Stevens published Six Amendments: How and Why We Should Change the Constitution. And in a short but punchy speech at a luncheon during the 2015 annual meeting, Stevens praised the current justices for taking positive steps in the direction of implementing at least some of his recommendations.

Stevens cited the majority opinion that Roberts wrote in King v. Burwell upholding key portions of the Affordable Care Act. In his opinion, Roberts avoided the temptation to focus on the specific language used by Congress in permitting federal tax subsidies available in 36 states to individuals obtaining insurance under the act. “The chief was dead right in focusing on the intent of Congress,” said Stevens, “even though the provision was awkwardly drafted.”

The Supreme Court’s decision upholding the right of voters to strip legislators of their authority to draw up district voting lines and its ruling that same-sex marriage is protected by the Constitution both were in accord with Stevens’ ideas on how the Constitution can be improved.