June 19, 1961: Police raid of home sparks a revolution in the criminal justice system 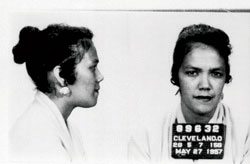 When seven police officers raided Dollree Mapp’s suburban Cleveland home in May 1957 seeking evidence that she or others in the two-story brick residence were making a bomb and were involved in illegal gambling, Mapp, known as Dolly, demanded to see a search warrant. A piece of paper was shoved at her, but before she was able to read the document the officers snatched it away.

The officers found no evidence of a bomb or illegal gambling, but they did discover books containing sexually explicit images. Mapp was charged with possession of obscene material.

At trial, the court determined there had been no search warrant and, as such, there was a violation of the Fourth Amendment ban on illegal searches and seizures. However, the judge still found Mapp guilty because the higher courts had not applied the amendment’s exclusionary rule in state court criminal cases. As a result, the evidence was admissible and the conviction stood.

That changed on June 19, 1961, when the U.S. Supreme Court, in a 6-to-3 opinion written by Justice Tom C. Clark, decided the rule was also applicable to the states through the incorporation doctrine. Justice Clark described it as a “deterrent safeguard.”

In his written opinion, Justice Clark noted that the late Justice Benjamin Cardozo (while a state court judge) once complained that the exclusionary rule allows “the criminal … to go free because the constable has blundered.” And Justice Clark responded that “the criminal goes free if he must, but it is the law that sets him free.”

Mapp v. Ohio marked the start of a revolution that the Warren court would impose on the nation’s criminal justice system. Described by many as the “nationalization of the Bill of Rights,” the justices used the foundation they created in Mapp to address issues including the right to effective assistance of counsel, forced confessions, jury selection and the implementation of the death penalty.