June is busting out all over with big-time SCOTUS decisions 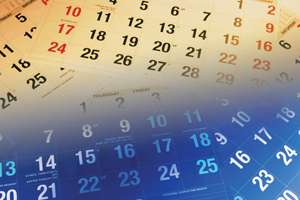 U.S. Supreme Court terms have ended with a bang in recent years.

In 2012, a last-day-of-the-term decision upheld most of the Affordable Care Act. In 2013, the justices struck down a key provision of the federal Defense of Marriage Act on their final day. And last June, the court held that at least some corporations have a right under a federal religious liberty statute to be free of the health care law's coverage requirements for contraceptives.

This June is shaping up as no different. The justices heard arguments in late April in cases about same-sex marriage and the death penalty, making the last days of the term a good bet for momentous rulings.

If they don’t come on the final day itself, big decisions are likely to be released in the last two weeks of the term. That’s when the court typically adds extra opinion days to its published schedule.

In March, three scholars published a law review article that set out to prove with statistical analysis a generally held understanding of the Supreme Court: that it releases its big opinions at the end of June.

“Although the Supreme Court decides its cases with dispatch, … there is this curious phenomenon, quantified in this article, of decisions in big cases tending to cluster at the end of the court’s term,” says the article in the Duke Law Journal, “The Best for Last: The Timing of U.S. Supreme Court Decisions” (PDF).

The authors are Lee Epstein, a law and political science professor at Washington University in St. Louis; William M. Landes, a professor of law and economics at the University of Chicago; and Judge Richard A. Posner of the 7th U.S. Circuit Court of Appeals at Chicago.

Their hypothesis that the biggest decisions seem to come at the end of the term is not as obvious a proposition as it might seem. For one thing, the Supreme Court is efficient at judicial work. The justices usually decide cases within three months of oral arguments, the scholars say.

So it might stand to reason that even big cases—and we’ll get to the scholars’ definition in a moment—that were argued early in the term would be decided well before the end of the term.

But the study finds that, even controlling for the month of oral argument, big decisions tend to cluster in the last week or two of the term.

“There is what we call the big-case effect,” Epstein says. “There are a lot of factors that contribute to time between oral argument and decision, such as when the case was argued and whether the case has dissents and a lot of back and forth. Even after you take into account some of those things, the big-case factor still matters.”

Epstein, who has spent time in Chicago at Northwestern University law school, has worked with Chicagoans Landes and Posner before. She recalls that after one recent term with a lot of big decisions, the three were having lunch when they offered theories about why the biggest decisions seemed to cluster in late June.

“It is something that everybody thinks, so validating that intuition seemed like a useful exercise,” she says.

The three scholars didn’t look just at recent terms and their big decisions. They examined 7,219 decisions from 1946 through 2012. (The mathematics-phobe might approach their article with trepidation. It is rife with standard deviations, statistical correlations and equations.)

As for defining a big case, a variation of Justice Potter Stewart’s famous 1964 observation about obscenity—“I know it when I see it”—wouldn’t do. The researchers used four relatively straightforward, if debatable, measures. One is whether the New York Times carried a front-page story about the case the day after it was decided. The second is whether the Times, Washington Post, Chicago Tribune or Los Angeles Times carried any story about the decision. (These decidedly old-school measures weren’t selected simply because the researchers are of a certain age. They tend to be used by political scientists as well. And remember, roughly two-thirds of the case sample predates the Internet.)

The third measure for defining a big case is those with a large number of amicus briefs. The fourth is aimed at a decision’s influence on subsequent law: the number of citations by the Supreme Court itself.

The study finds some predictable results and some surprises. One is a “compression effect,” meaning that cases argued late in the term are more likely than those argued earlier to be decided in late June.

So the researchers found that cases heard in April (the last month when any cases are heard) are decided in 55 days, on average. Cases argued in November take 101 days to be decided. Although the researchers don’t put it this way, the effect suggests—as Linda Greenhouse once put it in the New York Times—that the justices are subject to a form of Parkinson’s law—that work expands to fill the time allotted.

Another factor pushing big cases back is the addition of one or more concurrences and dissents. And cases with three or more legal issues rolled into them take significantly longer than cases with just one or two.

The math gets complicated, but the researchers conclude that “in all models, the probability that a case will be decided in the last two weeks of the term is significantly greater for big cases than for other cases, even after controlling for the month of oral argument … and other case attributes.”

The trend holds across the tenure of all five chief justices in the covered period, from Fred M. Vinson to John G. Roberts Jr.

Not everyone was bowled over by the researchers’ work.

“It reminds me of the study last year that high heels can make your feet hurt,” says Neal Katyal, a former acting U.S. solicitor general and now a Hogan Lovells partner who argues regularly before the Supreme Court. “It’s a pretty obvious finding.”

“You do find that as the end-of-term deadline approaches, work gets done,” he adds.

Katyal takes issue with the suggestion by Epstein, Landes and Posner that one reason for the flood of big decisions at the end of the term is that the justices manipulate the release of their opinions.

The authors suggest, in just a few paragraphs at the end of their paper, that the justices may delay the release of some big decisions “for public relations reasons” or to limit uncomfortable encounters at the functions on their “busy social schedules” by releasing the biggest ones just before they leave Washington for their summer recess.

(Although it is doubtful this affected the timing of the decision, since the case was argued relatively late in the term, Chief Justice Roberts was only too happy to be spending part of his 2012 summer recess teaching on Malta soon after he had provided the decisive fifth vote to uphold the core of the Affordable Care Act.)

Epstein says the end of the paper “is just speculation on our part.”

Richard Davis, a political science professor at Brigham Young University who has written about media coverage and public perceptions of the Supreme Court, was more inclined to accept the authors’ speculation that at least some decisions are pushed to the end of the term out of concerns over their reputations and legacies.

The justices would be loath to dwell on it publicly, but there are internal maneuvers they can take to delay publications, he says.

“It only takes one person on the court to put off a decision in a case,” Davis says.

Katyal says he thinks there is no support for the idea that the justices actively manipulate the timing of the release of an opinion.

“I think the court is very serious about announcing decisions when they are ready to be announced,” he says.

This article originally appeared in the June 2015 issue of the ABA Journal with this headline: “Going Out with a Bang: For the justices, June is busting out all over with big-time decisions.”