10 Questions: This legal team brings a wild approach to their practice 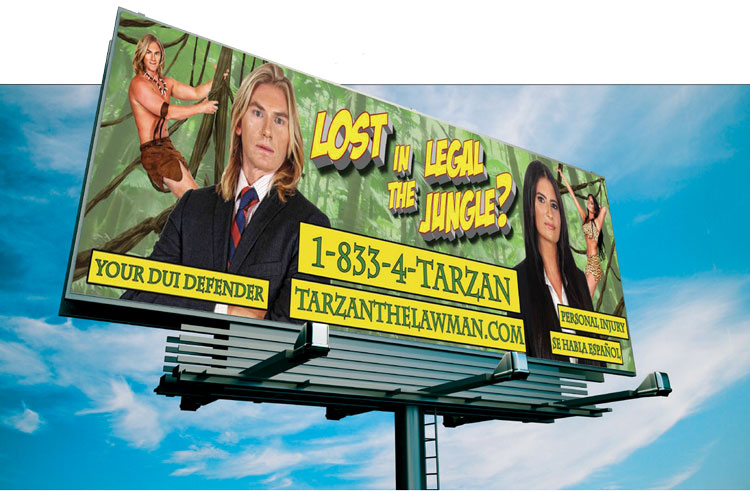 Tristen, you’ve been called Tarzan since high school because of your long hair, but how did you get the idea to translate that into a marketing theme for the firm?

TW: I have long hair and I dress flamboyantly, but so does everyone in Florida. When we decided to move to Kansas City, I knew it was something that would set me apart. I felt like I could make an impact here. And Lauren was like, “Let’s try a jungle theme and put the animals into it and see what happens.”

How has the bar responded? Have you gotten any feedback from other lawyers in the community?

LK: Because the campaign is so crazy and because of the animal rights thing, some lawyers probably thought that it wasn’t substantive. But the majority of the response has been incredibly positive.

TW: Yeah, they say, “You guys are pretty bold to do that.” But lawyers don’t have to be boring. We can be interactive. We can be social. We can get people involved, and we can have a sense of humor. But we can be serious and professional at the same time.

What has been the biggest challenge of the firm so far?

LK: Balancing it all. Starting a law firm is really hard anyway, even without the advertising and the appearances.

TW: Just this week, we’ve had two charity breakfasts, a magazine interview and a TV commercial shoot. We work with animal rescue groups, and we do a local TV show called KC Live where we bring on exotic animals, all rescues. We’re also holding a golf tournament at the end of June, with all the money going toward the rescue agencies that we support. We’re exhausted, but we’re finding out that to keep going, you have to be motivated and keep working every day to build the business.

TW: We get here about 8 a.m., and we go until about 12:30 on the human cases. Then, if we’re not in court in the afternoon, we lean toward the animal cases. We take cases through the night; our phones are open 24/7. If we have to meet someone at midnight, we’ll go together and do that. I work out with a trainer at 6 a.m. We have a reality show that’s starting soon, so I have to get ready!

LK: There will be loincloth scenes! (laughs)

TW: I am trying to get a bikini body. I have to keep up with her!

Tristen, both your mother and your grandmother work for the firm. What’s that like?

TW: It’s something else. My mom does the marketing, and my grandmother comes in and organizes. My mother had me when she was 15½ years old. She didn’t go to college; she raised me. She wanted to be a part of the business—maybe a little too much!

LK: His mom is so proud of him. He’s the first person in his family to go to college, which is something he’s humble about, but it’s a really big deal.

What are your plans for the future? Do you think about opening other offices or branching out geographically?

TW: We’d like to expand to neighboring states, andI’d like to concentrate on animal rights law while ourother attorneys work on the civil and criminal cases. We would prefer not to delegate our animal rights cases because those are the ones we love. We’re the best lawyers for the animals.

This article was published in the July 2018 ABA Journal magazine with the title "Law of the Jungle: Inspired by Tarzan and Jane, this legal team brings a wild approach to their practice."