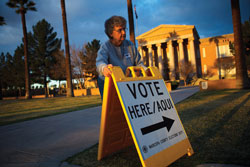 It’s almost spring, and that means the usual seasonal rites in the District of Columbia: the cherry blossom trees, the deluge of students—and another case before the U.S. Supreme Court involving a controversial law passed by the state of Arizona.

The Grand Canyon State has been before the justices to defend its laws or programs five times over the last three years.

In 2010, the high court: upheld an Arizona immigration law that penalized businesses if they employ illegal immigrants; struck down a state law providing for matching funds for candidates for state office that was meant to put them on an equal footing with wealthy, privately financed candidates; and held that a group of taxpayers lacked standing to challenge a state program of tax credits for donations for private school tuition.

Last term, the justices ruled that several provisions of the state’s controversial immigration law, SB 1070, were pre-empted by federal law. The court also declined to enjoin a provision requiring the police to verify the immigration status of people they stop or arrest.

This year’s offering is Arizona v. Inter Tribal Council of Arizona, a case about voter registration procedures that comes with an undercurrent of concern over illegal immigration. Arguments are scheduled for March 18.

At issue is the validity of Proposition 200, a 2004 Arizona ballot measure that requires applicants for voter registration in the state to provide evidence of U.S. citizenship. The 9th U.S. Circuit Court of Appeals at San Francisco held in an en banc decision last year that the measure was pre-empted by the National Voter Registration Act of 1993, also known as the “motor voter law.” Congress passed the law to make it easier to register to vote by treating driver’s license applications as voter registration forms and by authorizing a national mail-in registration form.

The case also implicates the elections clause in Article I of the U.S. Constitution, which allows states to set the “times, places and manner” of congressional elections but gives Congress the right to alter such state measures.

The case has potential consequences for the flurry of state legislation adopted in the last two years concerning registration, early voting and voter identification at the polling place. Those implications “are not at all abstract,” says Justin Levitt, an associate professor at Loyola Law School in Los Angeles and an election law expert.

“There are two questions in this case,” says Levitt, a visiting professor at Yale Law School this semester. “One is whether the elections clause has a different standard than the supremacy clause for reviewing when a [state] election law is pre-empted” by federal law. And the other is whether the 9th Circuit correctly found that the National Voter Registration Act precludes Arizona from enforcing this particular piece of legislation, which requires voters to show a document as proof of citizenship.”

Levitt says that “those questions are very much a piece of the wave of recent election laws, such as those requiring stricter photo identification at the polls.” The challenge to Proposition 200 has a lengthy procedural history, and a piece of the case has been before the Supreme Court already. In 2006, in a per curiam opinion captioned Purcell v. Gonzalez, the high court unanimously vacated a 9th Circuit order that had enjoined Arizona from enforcing the measure. Of greater urgency at that time, just a few weeks before the midterm federal elections, was a provision of the state ballot measure that required Arizona voters to present identification at the polling place.

The Supreme Court did not rule on the merits of the voter ID requirement, or the proof-of-citizenship obligation. But in the unsigned opinion in Purcell, the court stressed that “confidence in the integrity of our electoral processes is essential to the functioning of our participatory democracy.”

“Voter fraud drives honest citizens out of the democratic process and breeds distrust of our government,” the court continued. “Voters who fear their legitimate votes will be outweighed by fraudulent ones will feel disenfranchised.”

Levitt believes those passages, on issues not fully briefed or argued in the procedural matter, appeared to legitimize unsubstantiated claims of fraud. That has lent momentum to the movement to enact election laws that ostensibly address voter fraud but are in most cases unjustified and even counterproductive, he adds.

In 2008, in Crawford v. Marion County Election Board, the Supreme Court upheld an Indiana law that required voters to present photo identification at the polls, though the court’s fractured decision was hardly a broad endorsement of the legality of such restrictions.

Meanwhile, two groups of plaintiffs that had challenged Arizona’s Proposition 200 on equal protection and other grounds kept going in the lower courts after the Purcell decision, focusing their attention on the proof-of-citizenship requirement for registration.

The plaintiffs noted that the official state pamphlet describing the 2004 ballot measure said it “will prohibit noncitizens from being able to vote in Arizona” and will ensure that “illegal aliens who are not entitled to vote or obtain certain benefits cannot subvert the law to access them.”

Proposition 200 requires local election officials in Arizona to reject applications that are not accompanied by proof of U.S. citizenship. Applicants can meet the requirement by listing their driver’s license or state ID numbers (provided they were issued since 1996), documentation associated with American Indian tribal status, the number from a U.S. naturalization document, or photocopies of their U.S. birth certificate or passport.

“Proposition 200 is an anti-immigrant measure,” says Nina Perales, the vice president of litigation for the Mexican American Legal Defense and Educational Fund, based in Los Angeles. “Arizona didn’t have any proof of any significant or intentional voter registration by noncitizens.”

MALDEF represents a number of Latino citizens and groups as plaintiffs, and their suit alleges that more than 31,000 individuals were rejected for voter registration after Proposition 200 took effect. One of them was Jesus M. Gonzales, a maintenance worker and Mexican immigrant who became a naturalized U.S. citizen after the measure went into effect.

He testified at trial that after he was sworn in as a citizen, he filled out a voter registration form and expected to become a voter. His application was denied twice, even though he had supplied a number from his naturalization document.

According to MALDEF, naturalized citizens face the hassles of a “rejection loop” in which their registration applications are automatically denied despite the inclusion of a number from their naturalization documents.

Another set of plaintiffs—including the Inter Tribal Council of Arizona, the Hopi tribe and other groups—argues that Indian tribes in Arizona are harmed by the law’s proof-of-citizenship requirement because they do not use federal Bureau of Indian Affairs identification cards. “This is another overreach by Arizona,” says Jon M. Greenbaum, chief counsel of the Lawyers’ Committee for Civil Rights Under Law, a Washington group representing the second set of plaintiffs. He is referring to the provisions of the state’s more general immigration measure that the Supreme Court held to be pre-empted by federal law.

Arizona Attorney General Thomas C. Horne argued in the state’s brief that language in the voter act requiring states to “accept and use” the federal mail-in registration form did not preclude states from adding their own specific requirements. And the provision is consistent with Congress’ goal of promoting election integrity, he said.

“If the phrase ‘accept and use’ as set forth in the NVRA is construed in accordance with its plain meaning (as it should be), there is no conflict between [the federal law’s] language and Arizona’s requirement that applicants supply some evidence of citizenship with their voter registration forms,” Horne said in the brief.

In an amicus brief on Arizona’s side filed by Alabama, Georgia, Kansas, Michigan, Oklahoma and Texas, Alabama Attorney General Luther Strange argued that Proposition 200 “works hand in glove with the NVRA.” He reminded the court that some states still believe the federal motor-voter statute was an unconstitutional intrusion on state power, and that it should at most be given a narrow reading.