Keep Your Pants on! Lowrider Trousers Have Legislators, Others Up in Arms 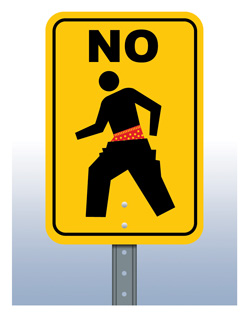 Almost anywhere you go, you’ll see them—teens and young adults with pants that appear to be headed south. And before you know it, you’re in harrumph mode: Back in your day you had more dignity, self-respect, belts, blah, blah, blah.

If you have to blame someone, you could probably start with Madonna. The singer’s proclivity for exposing her underwear during performances in the 1980s turned the concept into a fashion statement that caught on in the hip-hop world.

Known as “saggy pants,” the look is achieved by wearing one’s usually unbelted pants below waist level, sometimes even below the buttocks, treating the world to the sight of one’s underwear. It was widely adopted by young males in the ’90s, and ever since then, droopy drawers have been the shizzle.

Whatever its genesis, the look remains in vogue with those who like to make it quite clear they are not bound by the strictures of societal norms. But society, it appears, has a different take on it.

Over the past few years, at different levels of government, multiple measures have been proposed that ban the wearing of pants in a manner that causes one’s underwear to be visible.

Results have been mixed, with some laws passing, some tabled and some rescinded. But that doesn’t mean authorities are any less determined to become fashion police.

Several states, including Alabama, Florida, Indiana and Tennessee, have passed bans on saggy pants or are in the process of doing so. And at the local level, numerous towns have proposed or enacted bans, which have actually become something of a cash cow in some locales. Albany, Ga. (pop. 77,434) for example, collected almost $4,000 over a nine-month period from individuals who chose to expose.

School administrators have their own methods. At Northwestern High School in Rock Hill, S.C., student offenders are loaned a belt to avoid being written up and sent to the principal’s office. And at Westside Middle School in Memphis, Tenn., uncooperative students’ pants are zip-tied at or above the waistline. This is known as being “Urkeled,” in reference to the nerdy Steve Urkel from the ’90s sitcom Family Matters.

Opponents of the bans say they set a dangerous precedent and only invite more governmental control over choices made by individuals. “Choice of clothing is a personal one and one in which the government has no place,” said the American Civil Liberties Union of Louisiana in a letter to the East Baton Rouge Parish Council, which was considering a saggy pants ban.

In the courts, judges have shown little tolerance for such sartorial impropriety. In Autauga County (Ala.) Circuit Court, a defendant wearing saggy pants was given a three-day stint in jail for contempt of court. And a Manhattan Supreme Court justice grew so weary of seeing defendants’ underwear that he taped a sign to the defense table that reads: “Pull up pants.”

In an era of scant resources, it seems hard to justify the amount of time, energy and money allotted to criminalizing the sight of a little too much backside. And it kind of makes you wonder: How did plumbers get away with it for all these years?