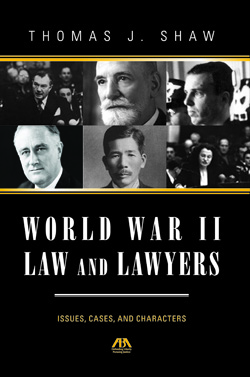 A new book published by the ABA offers nearly 600 pages of proof that the wheels of the law don’t stop turning during the trauma of war.

If anything, the book produced by ABA Publishing—World War II Law and Lawyers: Issues, Cases and Characters—provides evidence that modern war is a busy incubator of new legal issues that involve lawyers in all aspects of a nation’s military, economic and social mobilization.

Author Thomas J. Shaw examines 52 primary legal issues arising out of World War II, including espionage, military tribunals, genocide and war crimes, use of nuclear weapons, sexual slavery and looted assets. Shaw includes a discussion of modern applicability for 20 of those issues. He describes how each topic played out before, during and after the war in a single country. While he describes the book as “a bit America-centric,” other countries covered include the United Kingdom, Nazi Germany, Imperial Japan, Vichy France and Switzerland, which was active behind the scenes of the war in Europe despite its official declaration of neutrality.

In addition, the book contains brief profiles of some 300 lawyers and judges from more than 20 countries who played significant roles in fighting the war’s legal battles. Some of them—like President Franklin D. Roosevelt; California Attorney General Earl Warren, who later served as U.S. chief justice; and Justice Robert H. Jackson, who served as chief U.S. prosecutor at the first Nuremberg trials—are well-known figures, but others have slipped into relative obscurity. Unearthing their stories was one of the pleasures of researching and writing the book, Shaw says.

“Some of these lawyers kind of fell off the pages of history,” he says. “I had to piece together from sometimes dozens of sources who these people were. You would see obscure references, but they would lead to dead-ends.”

There was, for instance, Edward R. Burke. The Republican senator from Nebraska co-sponsored the Selective Training and Service Act, which introduced the military draft in 1940, then was dropped by his party in the next election. One of those draftees, Benjamin Kaplan, rose to the rank of lieutenant colonel in the Army and was the primary American drafter of the indictments against Nazi leaders in the Nuremberg Trials. In the aftermath of the war, Sadie Tanner Mossell Alexander, the first African-American woman to receive a law license in Pennsylvania, served on the President’s Committee on Civil Rights created by Harry S. Truman in 1946. The committee’s recommendations led to Truman’s executive order that essentially integrated the U.S. military. 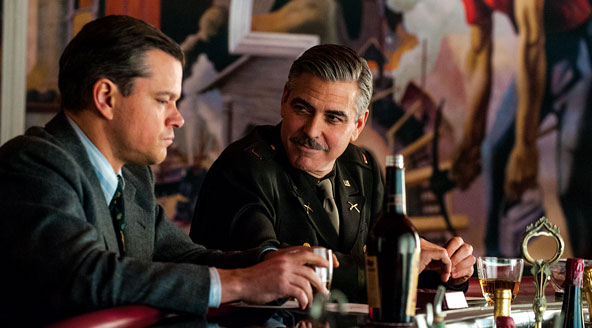 The environment was much different for lawyers in Germany and Japan, says Shaw, especially as those countries drifted toward tyranny and war in the 1920s and ’30s. “The German legal system was completely subverted—but legally,” he says. “They used the law to undermine the law.” Among his portraits, Shaw describes the career of Roland Freisler, who began as a lawyer for the Nazi Party and went on to become the feared president of the Nazi People’s Court, doling out death sentences on a regular basis in proceedings like the White Rose trial of the leaders of a student resistance movement. Among Freisler’s victims was Berthold von Stauffenberg, a distinguished international lawyer who participated in a plot to assassinate Adolf Hitler in July 1944. Stauffenberg’s brother Claus carried a briefcase with a bomb into Hitler’s headquarters that just barely missed killing the Nazi leader.

On the Pacific front, the Japanese representative who signed the surrender documents on the battleship Missouri was Mamoru Shigemitsu, a lawyer and diplomat who had tried to avert the conflict with the United States in 1941. One of Shaw’s favorite episodes is the story of “the Monuments Men,” some of them lawyers, who went in with—and sometimes ahead of—American troops in Europe with the mission of finding and preserving cultural assets before they could be destroyed. “They snuck behind enemy lines to find and then hide the art so they could safeguard and then return it” once the war ended, Shaw says. A film based on the exploits of the Monuments Men starring George Clooney, Matt Damon and Cate Blanchett is scheduled to be released in 2014.

Among the lawyers assigned to the Monuments, Fine Arts and Archives Program was Keith Merrill, who also happened to be a brother-in-law of legendary Gen. George S. Patton.

A U.S. soldier examines stolen valuables thought to be a part of Hermann Göring’s private stash, found by the U.S. Army Schönau am Königssee, Germany, in May 1945. AP Photo / Jim Pringle.

Given his background, Shaw wouldn’t seem to be an obvious choice to write a legal history of World War II. An American lawyer who now is based in Tokyo, Shaw has focused his writing primarily on issues relating to the Internet and information security. He runs CloudRisk Asia, which performs risk assessments for cloud service providers and private and public sector organizations. He is the founder and editor of two ABA periodicals: Information Security & Privacy News and the E-Discovery and Digital Evidence Journal.

But some hint of Shaw’s fascination with WWII can be found on the dedication page of his new book, which displays a photo of his father, Keith Wesley Shaw, a bomber co-pilot in the Pacific Theater, in his U.S. Army Air Forces officer’s uniform.

“Why another book about WWII, especially more than 70 years after it was first fought?” muses Shaw in the foreword to the new book. “Although my goals here are modest, what hopefully makes this book unique is its focus on the three main areas suggested by the subtitle of the book: legal issues, cases and characters. First, it brings together in a single volume the major legal issues surrounding this conflict. Second, it takes a global view, looking at the laws and cases in as many countries as necessary to describe these major issues. And third, it introduces many lawyers and judges from around the world involved with these issues, some of whom may be little known or long forgotten today.”

Shaw found himself in awe of the lawyers and judges who faced down the evil they confronted. “It was people who stood up to tyranny and were saying, ‘That’s not right, going down that path,’ ” he says. “It was impossible not to be impressed with FDR, the lawyer-in-chief, as he oversaw war efforts in two very different parts of the world while managing the home front.”

Another of Shaw’s purposes in writing the book was to track forward some legal issues that still have resonance. “There are a whole slew of issues that continue to be relevant into the modern day,” he says. “It appeals to lawyers who want to understand where these issues originated as well as people who are just history buffs who have not seen this perspective of World War II told.”

Shaw wrote the book in just over four months, which he says felt like “running a marathon at a sprint. If I were sane, I would have spent several years doing this.” But now he’s in the middle of another sprint: writing a book on the legal history of World War I, which is due out in early 2014, coinciding with the 100th anniversary of the start of that conflict.

Both of Shaw’s efforts are part of a series of history-oriented books published by the ABA. To date, the series has included Lawyer: A Brief 5,000 Year History; Civil War Lawyers: Constitutional Questions, Courtroom Dramas and the Men Behind Them; and American Lawyers: Public Servants and the Development of a Nation. Also in the works is a book about lawyers and the Cold War.

While the history of WWI may lack the familiarity of the second world war, Shaw says, many of the legal issues will have a familiar ring. “It’s surprising, from 100 years ago,” he says, “how much is still relevant today.” 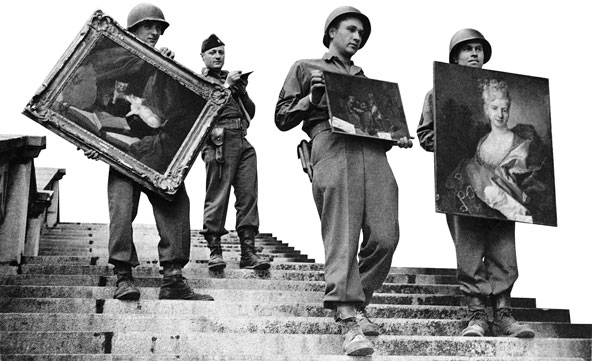 U.S. soldiers take custody of some of the stolen treasures the Germans hid at Neuschwanstein Castle in the Bavarian Alps in 1945. Second Lt. James Rorimer (second from left) was a curator at the Metropolitan Museum of Art before the war and became its director afterward. AP Photo

This article originally appeared in the November 2013 issue of the ABA Journal with this headline: “Lawyers and the Good War: New ABA book shows key battles of WWII were fought in courtrooms and legislatures.”

After the issue had gone to the printer, George Clooney announced that his film, The Monuments Men, would be released next year, not in December, as reported in “Lawyers and the Good War.”