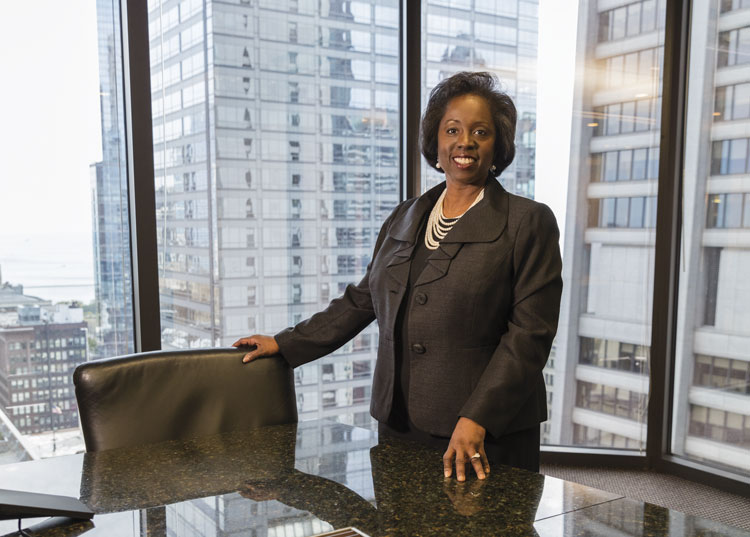 Patricia Brown Holmes was on top of the world. It was 1999, and she was living a dream that most attorneys never come close to experiencing. Less than two years prior, Holmes, at the age of 36, had become the youngest African-American woman to serve as an associate judge on the Circuit Court of Cook County. “Being a judge is considered the top of the profession,” she says. “I wanted to be at the top of the profession. I wanted that ring.”

Then she was told she might have only six months to live.

Diagnosed with lymphoma, her prognosis was grave. She could have drawn on her training as a lawyer to use what was left of her time to get her affairs in order. Instead, she drew on her other lawyerly skills and decided to fight.

“I tend to be tenacious and determined,” Holmes explains when recalling her death-defying recovery. “I’m the person you want to have around in an emergency because I’m not paralyzed. I tend to assess the circumstances quickly and accurately and then take appropriate action. But I’m constantly reassessing, listening and looking for new clues that may require a change in direction. I think those skills helped me survive cancer. I didn’t accept the prognosis. I assessed the situation and found ways to fight.”

Holmes credits her Type A personality and an experimental white blood-cell enhancer with saving her life. Since that challenge, she has served as president of the Chicago Bar Association and helped found the law firm of Riley Safer Holmes & Cancila.

Then, in July 2016, Holmes was appointed special prosecutor to investigate whether Chicago police officers involved with the highly charged 2014 fatal shooting of Laquan McDonald lied about another officer’s misconduct.

Colleagues say it’s no surprise that she got such an important and high-profile job. “She has unfailing judgment,” says Ronald Safer, who worked with Holmes at the U.S. attorney’s office and has been her law partner since 2005, first at Schiff Hardin and then at Riley Safer. Holmes is “brilliant,” adds Robert Riley, another partner, “but she also has tremendous common sense. ... Her voice is measured and insightful.”

Some of those directly involved in the McDonald case concur. Locke Bowman, a civil rights lawyer and professor at Northwestern Pritzker School of Law who petitioned for a special prosecutor in the case, says he was pleased with Holmes’ appointment. “She gets the issues and she’s unafraid to do the right thing. Her performance in office [so far] has confirmed our confidence in her.”

Although Holmes herself cannot comment on the McDonald matter, she says her team is moving the investigation forward “as expeditiously as possible, giving it the time, attention and care it deserves.”

“I can say I am approaching this case not as an issue of public policy but as a set of specific facts that need to be discovered, examined and carefully weighed,” she says.

This past summer, Holmes secured indictments for conspiracy, official misconduct and obstruction of justice against three police officers and successfully moved to remove the judge initially assigned to the case, whom some considered pro-police in similar excessive-force cases.

“The indictment makes clear that it is unacceptable to obey an unofficial code of silence,” Holmes said at the time. In late August, she added that the grand jury was looking at more individuals and weighing further indictments.

It’s not surprising, but her latest job has some serious detractors. “These charges are, in our minds, baseless. Our officers are being made the scapegoats,” said Kevin Graham, president of the Fraternal Order of Police, in a statement after the indictment. “How the special prosecutor can construe a ‘code of silence’ theory defies belief. How can officers be indicted based upon which witnesses they spoke to and which ones they didn’t?”

Holmes was one of four candidates recommended for the special prosecutor position after a request by community groups and a member of McDonald’s family. That Holmes is getting paid comparatively little for her work on the case is consistent with her values, colleagues say. When asked how much she’s getting, Holmes declines to comment, except to say it is less than what she usually charges.

“There’s no upside for her,” explains Zaldwaynaka “Z” Scott, a Foley & Lardner partner who worked with Holmes at the U.S. attorney’s office in Chicago. “She’s working at the lowest rate. But this case needed someone who could look at the evidence and work to be fair and honest and not just driven by emotion.”

It’s not the first time Holmes has been charged with leading a sensitive investigation. In 2011, she was appointed trustee of Burr Oak Cemetery, a historic African-American graveyard in the Chicago suburb of Alsip that declared bankruptcy after a scandal involving a grave desecration and reselling scheme.

It was a grim Halloween story: In 2009, the cemetery, the last resting place of jazz great Dinah Washington and civil rights martyr Emmett Till, was found to be reselling burial plots and either interring caskets above those already buried or removing remains to put new bodies in the plots. Prosecutors described a grisly scene where 1,500 bones of 29 people were strewn on cemetery grounds. A cemetery manager and three employees were convicted in the scandal.

But it was more than a job for Holmes. Her father’s grave marker and remains were likely among those removed, Holmes told the Daily Southtown, a suburban Chicago newspaper, when reinterment ceremonies were held in May 2016.

She told the newspaper she went to visit her father’s final resting place in Burr Oak, but was unable to find it.

“You figure, well, it has been a couple years—maybe things change. Maybe it looks different,” Holmes said then. She ultimately convinced herself that she had forgotten where her father, Andrew Brown, was buried. Then she heard about the grave-reselling scandal.