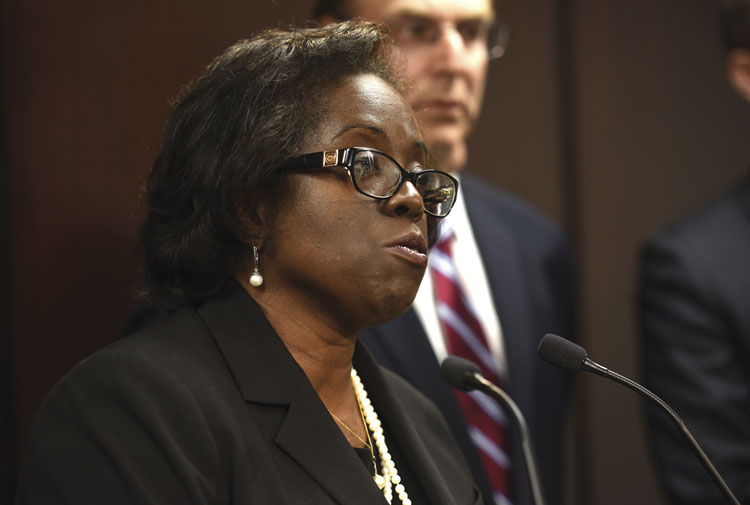 As Burr Oak Cemetery’s trustee in the aftermath of the scandal, she was tasked with overseeing its restoration. She also chaired the Illinois governor’s Cemetery Oversight Task Force, which recommended regulatory changes to the industry.

Now, working on the McDonald matter, Holmes doesn’t mind juggling the role of special prosecutor with her law practice. “I’m passionate about my work in that way—my client’s problems are my problems,” she says. In the McDonald matter, “I represent all of the people of the state of Illinois as the special prosecutor—and, in a broader sense, our system of justice. So, yes, I have very long days—as many as necessary.”

That work ethic can be traced back to Holmes’ roots on Chicago’s South Side, where she grew up the oldest of five kids. “We had no nannies, so I was my mother’s helper. That’s probably what contributes to people telling me I’m bossy,” she quips. Holmes graduated first in her high school class and turned down Ivy League offers to attend the University of Illinois. “It was close to home and not as expensive. My mom didn’t have a college fund waiting for me,” she explains.

She began her studies in industrial engineering but soon discovered there were few women and no other black students in that department. “People didn’t want to sit next to me. I didn’t have a study group,” she recalls. She switched to an individual major with a mix of philosophy, sociology, psychology and social work. “I have a jack-of-all-trades background, which has helped me as a lawyer.”

On a dare, Holmes took the LSAT and wound up earning a full scholarship to the University of Illinois College of Law. Upon earning her JD in 1986, she expected to become an intellectual property lawyer. “I still had an engineering background and I have a scientific mind,” she explains. “But I couldn’t get anyone to hire me because in that field there weren’t folks who look like me. Back then, firms only hired one black person.”

So instead, Holmes became a prosecutor, handling misdemeanors, felonies and appeals in the Cook County State’s Attorney’s Office, eventually rising to supervisor. She also became one of the few Illinois lawyers who argued a case in the state supreme court twice in a single day. Five years later, she moved to the U.S. attorney’s office, leading 25 trials there in five years.

Scott, who chaired the hiring committee at the U.S. attorney’s office then, describes Holmes as “fearless, humble and incredibly bright.” The two, who were founders of the Black Women Lawyers’ Association of Greater Chicago and the ABA Criminal Justice Section’s Women in White Collar Subcommittee, worked together on several cases, including U.S. v. Emenogha, a drug case involving multiple defendants that featured one of the first money-structuring charges brought by the Internal Revenue Service.

After the U.S. attorney’s office, Holmes became Chicago’s chief assistant corporation counsel for municipal prosecutions, leading such cases for every city department. All along, Holmes says, she was building a judicial resumé, waiting for the right opportunity.

That came when a position for associate judge of the Circuit Court of Cook County opened up in 1997. Although she was just 36, friends encouraged her to apply, suggesting she wouldn’t make it the first time around but would get exposure for later. To her surprise, she got the job.

After serving almost eight years in the juvenile court, Holmes applied for a magistrate judge position, which she didn’t get. That coincided with law firms making a push for internal diversity, and friends suggested that she try private practice.

Safer quips that he “dragged her off the bench” to join him at Schiff Hardin. It’s cliche, he concedes, “but she’s one of a kind.” Safer calls Holmes “one of the most genuine, caring, committed people you’d ever want to meet.”

Not surprisingly, Holmes had some anxiety about leaving the bench. After all, she’d gotten that ring she’d long wanted. “But I didn’t view it as going backwards. I viewed it as a new path that could help other people,” she recalls. In those days, firms couldn’t really diversify organically, and they needed people like her.

At Schiff Hardin, she says, “I was the first black, female equity partner—now there’s a slew. I could show young African-American lawyers what’s possible, that you can be on the bench. I worked to train, recruit and vet lawyers in order to expand diversity” in the profession. Holmes rapidly rose to a leadership position, chairing the firm’s white-collar crime and government investigations group and serving on the executive committee.

Eric Barnum met Holmes in 2006 when they worked together on Schiff Hardin’s diversity committee. “She has a unique ability to make a convincing argument in new, novel, never-before-tried kinds of ways,” explains Barnum, now at Baker & Hostetler in Atlanta.

“She speaks for the majority and the minority in an inclusive way, giving equal weight and credit to different perspectives. That way she can get everyone to buy into a common goal.”