A recently issued report on the employment status of 2014 graduates from ABA-accredited law schools raises one of those “glass half-full or glass half-empty” dilemmas. Actually, the data can support either of those interpretations—and probably both.

On the one hand, the percentage of graduates from the 204 U.S. law schools accredited by the council of the ABA Section of Legal Education and Admissions to the Bar who are employed in jobs that require a law license increased between 2013 and 2014. As of March 15, 64.1 percent of all 2014 law school graduates were in positions for which bar passage is required, according to graduate employment data released by the legal education section in April. The data is compiled from reports submitted to the section by accredited law schools.

That number is nearly 2 percentage points higher than a year ago, when 62.2 percent of all law school graduates (as of Feb. 15, 2014) held legal jobs requiring a law license.

The numbers for both years encompass full-time and part-time jobs that are either longtime (lasting more than a year) or short-term (specifically designated to last less than a year). Similarly, the data the schools reported show that 14.5 percent of 2014 graduates were in jobs as of March 15 for which a law degree (but not a law license) is required or preferred, compared to 13.6 percent of 2013 graduates.

But while those increases are positive, they also are slight, and they may be at least partly attributable to a combination of a smaller law school graduating class in 2014 and a tweak in the way law schools report their employment numbers to the legal education section, which is designated by the U.S. Department of Education as the national accrediting body for law schools in this country.

Another factor that may have affected comparisons between employment data for 2014 graduates compared to the class of 2013 is a change in the deadline for law schools to report their numbers. The data for 2014 reflect the employment status of graduates as of March 15, roughly 10 months after graduation. Data for the class of 2013 reflect the employment status of graduates as of Feb. 15, roughly nine months after graduation. Legal education section officials say they moved the reporting date back a month beginning this year to facilitate comparisons between schools because some states release their bar exam results later than others.

This article originally appeared in the July 2015 issue of the ABA Journal with this headline: “Mixed Messages: The latest numbers on employment for 2014 law school graduates don’t add up to a clear trend.” 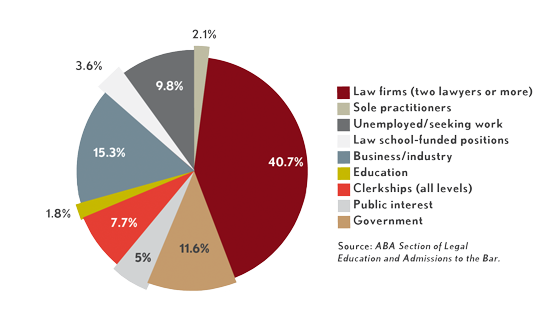 Most 2014 law graduates from ABA-accredited law schools are employed in some type of legal setting, but only about 43 percent are working at law firms. Meanwhile, just under 10 percent of the class still is unemployed and looking for work. (Percentages do not total 100 percent because the employment status is known for only 97.9 percent of all graduates.) 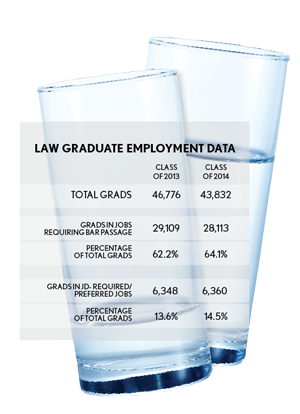 Statistics often are illuminating, but sometimes they’re just confusing—especially when they suggest conflicting trends at the same time. That’s the case with the latest numbers on law graduate employment reported to the Section of Legal Education and Admissions to the Bar by the nation’s 204 ABA-accredited law schools. Those numbers show a slight increase in the percentage of 2014 graduates from those law schools who are working in law-related jobs compared to the class of 2013. But the actual number of 2014 graduates employed in jobs that require a law license shows a slight drop-off from 2013, which had a larger collective graduating class. The number of 2014 graduates employed in jobs for which a law degree (but not a law license) is required or preferred did increase ever so slightly compared to 2013.