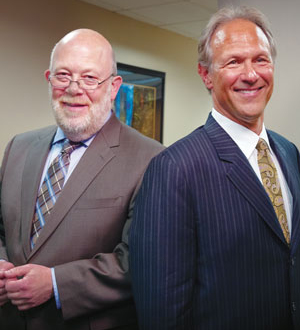 Norman Finkel stood in the outside hallway of Chicago’s United Center, trying to escape the excessively loud band warming up for the Rolling Stones.

For many years, Finkel and Daniel Beederman, a partner at Schoenberg Fisher Newman & Rosenberg in Chicago, considered moving to the other’s firm. But over time, the conversation shifted to merging—a scary, big commitment. Almost two years earlier, Finkel and Beederman decided the time wasn’t right and walked away.

But as he waited for Mick Jagger and his bandmates to take the stage, Finkel’s cold feet melted. Amid the din of the warm-up band, he called Beederman and proposed a union.

“Out of the blue, I said, ‘Let’s move forward,’” Finkel says. And Beederman said yes.

“Deciding to merge is very much like deciding to get married,” says John Smock, partner at Smock Law Firm Consultants in Lake Forest, Illinois, a management consultant firm. “There’s dating, courtship, the wedding and then the marriage.”

In the dating stage, potential partners are attracted to each other’s reputations and work. “A number of mergers come from a place of mutual respect,” Smock says.

Finkel and Beederman met in 1990 as opposing attorneys in a hotly contested breach-of-contract case, with litigation that lasted five years.

“I found Dan to be extremely professional, a very good lawyer,” Finkel adds. “When you have those characteristics, it makes litigating much easier.”

“Norm was what everyone wants on the other side of a case—someone who knows the law, someone who has a grasp of the law and the facts and has a professional manner,” Beederman says.

As in dating, there might be mutual admiration, but the relationship may not go anywhere. For several years, Finkel and Beederman didn’t have direct contact, but occasionally referred the other for work.

In 1999, the two started courting. Each hoped to lure the other to his own firm. “We probably did that dance for a few years,” Finkel says.

Finkel and Beederman moved slowly, getting to know each other. Over five years, their conversations became more serious, and they discussed merging firms.

Firms merge when they need to grow based on client pressure or market pressure to be strategically larger, Smock says. “Truth is, if you want to grow, you are limited to one strategy—and that’s a merger.”

In a flat market, mergers can increase geographic capabilities, add clients and expand areas of expertise. In 2015, there were 91 U.S. law firm mergers announced, according to Altman Weil MergerLine; that’s the highest number in the nine years of recorded data, and that trend is extending into 2016.

In 2004, the two Chicago North Shore natives decided the time was not right and respectfully parted ways. Two years later, however, Finkel made that call to Beederman before the Stones concert.

But as in planning a wedding, issues can emerge.

Picking the name for the new firm can end many relationships, says Ward Bower, a principal at Altman Weil, a Newtown Square, Pennsylvania-based management consultancy.

A key move during engagement is ensuring the corporate cultures would mesh. “Both firms had a strong work ethic and had a lot of collaboration,” Finkel says.

On Friday, Jan. 5, 2007, each firm closed its doors. And the following Monday the newly formed partnership opened in Schoenberg Finkel’s offices above Union Station.

“It was seamless,” Finkel says. “It was a complete merger. No one was let go.”

And like any marriage, the union takes adjustments, compromise and hard work. But more law firm mergers succeed than fail, Smock says.

“I have a theory,” he posits. “There is so much professional pride, once the lawyers decide to do it, they are going to make it work.”

By year-end 2015, the merged firm’s revenues had increased 44.7 percent since its beginning, Finkel says.

“It’s damn hard work, and you can’t take anything for granted,” he adds. “But if it’s the right fit, you should do it.”

This article originally appeared in the August 2016 issue of the ABA Journal with this headline: “Frenemies No More: Formerly opposing counsel, they took the plunge to merge firms.”