Law of the Jungle: ABA Pushes for Model Act Setting Standards for Treatment of Pets in Disasters 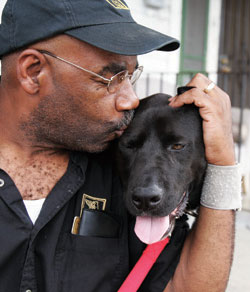 Jessie Pullins was reunited with his dog, J.J., in June 2009, almost four years after Hurricane Katrina. Pullin’s effort to find his lost pet is featured in “Mine,” a documentary that won an audience award at the 2009 South by Southwest film festival and was broadcast by PBS in February 2010. Photo by AP Photo/Bill Haber.

Seven years later, Hurricane Katrina still is teaching us lessons. As floodwaters from broken levees inundated much of New Orleans in the days after the hurricane swept over the city on Aug. 29, 2005, the primary focus of rescue teams was on saving the lives of human residents. But it quickly became evident that thousands of dogs, cats and other pets were also victims of the disaster.

During the chaos of rescues and evacuations, many residents were barred from bringing pets along on buses leaving the city or on some boats rescuing families from their homes. Emergency plans at the state and federal levels failed to provide enough guidance to ensure the safe evacuation of family pets. Some individuals refused to leave their homes if they could not bring their animals with them. “The horror of Hurricane Katrina was a game changer,” says Barbara J. Gislason, a Fridley, Minn., lawyer who serves as liaison for the ABA’s Section of Family Law to the association’s Committee on Disaster Response and Preparedness. “It became nationally recognized that people would risk their lives to save the pets that they love.”

The Louisiana Society for the Prevention of Cruelty to Animals estimated that at least 70,000 pets remained in New Orleans during Katrina, but only about 15,000 were rescued. Of those animals, fewer than a quarter were reunited with their owners.

Tens of thousands of animals died in the disaster. However, many didn’t die right away but were left to roam the city, being exposed to unsanitary conditions and acquiring various illnesses and injuries.

“A number of animals continued to simply survive; others became diseased or died of starvation,” says David S. Favre, a professor who teaches animal law at Michigan State University College of Law in East Lansing. “We have no way of knowing what happened to them all.”

Later, disputes over what happened to animals after they were rescued and whether pets given to foster owners should be returned to their original owners became part of the legal snarls that needed to be untangled in efforts to bring New Orleans and other areas of the Gulf Coast back to normal. That’s when it became clear that the law wasn’t ready to deal with questions of pet ownership in the wake of a major disaster.

“Post-Katrina, it became clear that laws did not adequately deal with animals that were rescued and then dispersed,” Favre says. “There were a number of lawsuits where people were trying to get their animals back.”

Efforts are under way to ensure that the lessons learned from Katrina will help the law be more responsive to the needs of pets and their owners, and also more helpful to rescue operations during the disruption caused by natural disasters.

In 2006, President George W. Bush signed into law the Pets Evacuation and Transportation Standards Act. States and cities must submit a dis-aster preparedness plan to qualify for funding from the Federal Emergency Management Agency. The PETS Act requires that those plans address the needs of households with pets or service animals.

And in 2010, the ABA House of Delegates adopted a policy urging states and territories to adopt a Model Act Governing Standards for the Care and Disposition of Disaster Animals (PDF). The recommendation was sponsored by the Tort Trial and Insurance Practice Section.

The section’s Animal Law Committee was instrumental in developing the model act, states the report submitted to the House in support of the recommendation.

After Hurricane Katrina—and then Rita, which struck the Gulf Coast in late September 2005—the committee helped form an Animal Disaster Relief Network, which included representatives from most major animal advocacy organizations in the United States, along with veterinary organizations. The model act was drafted primarily by the network’s Legal Panel on Emergency Management Regarding Animals.

The model act requires that an animal shelter keep a rescued animal for at least 30 days—and sometimes as long as six months if directed by the state veterinarian—after posting online a photo of the animal and tracking information.

In addition, an animal owner who contacts the shelter but is unable to get the pet during the initial holding period would be able to request that the shelter keep the animal for another 30 days, so long as the owner is willing to pay the cost of that care. 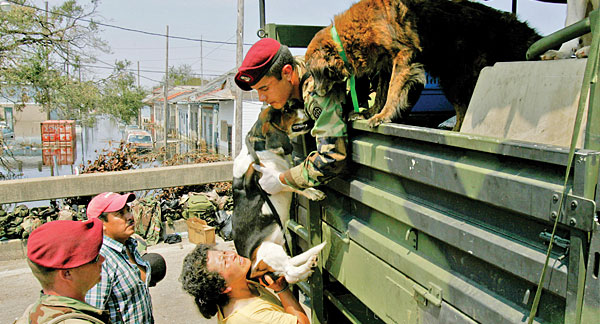 New Orleans resident Iris Zelaya lifts one of her eight dogs into the arms of a U.S. Army soldier in the aftermath of Hurricane Katrina on Sept. 9, 2005. Photo by AP Photo/Lynne Sladky.

STUMBLING THROUGH A MAZE

The model act covers an important legal gap relating to pets when a disaster occurs, says Gislason, who was the first chair of TIPS’ Animal Law Committee. “If there is no clear demarcation of the time period a person has to reclaim a pet, then rescue groups don’t know what to do with the animals and what to tell the people who want to adopt these animals,” she says. “We need a uniform standard throughout the country so that, when there are serious disasters, people know exactly how much time they have to find their animals.”

But so far, no state or territory has adopted the model act into law. At this point, state laws vary on how post-disaster rescue and adoption of pets are handled, creating confusion for rescue groups and, sometimes, heartbreak for the original owners or the adopting families—or both.

Favre wonders how long it will take before the states begin to act on the issue. “Yes, there are more lawyers dedicated to animal law, but the question is: Do any of them have a passion for focusing on disaster relief?” he says. “I’m hopeful, but the problem is that people don’t always do so well with changing laws in advance of disasters. It’s after a disaster that they pay attention.”

Other animal rights advocates say the law still has not caught up with the modern relationship between Americans and their pets.

“Americans will spend more than $50 billion on their animals this year, a figure that has risen annually since 2001, even during the recent recession,” says Kristina A. Hancock, a senior counsel at McKenna Long & Aldridge in San Diego who followed Gislason as chair of the Animal Law Committee. “U.S. laws, however, have not kept pace with America’s growing love affair with its pets, as reflected by these expenditures.”

Clearly, the issues for animals, their owners and their rescuers that are triggered by disasters still require a lot of work to sort out, but efforts appear to be headed in the right direction, Gislason says. “Every time an animal law issue comes up, there will always be people who think these issues are frivolous,” says Gislason. “We need to continue to have credible lawyers to carry the flag and show that caring for our animals is a mainstream concern.”